“I spent a lot of years pretending to be somebody that I’m not,” said Billie Eilish in her Saturday Night Live opening monologue, “Basically acting.”

“And somebody wise once told me: ‘Billie, you should never, ever act…that person was my mom!” exclaimed the 7x Grammy winner in her SNL hosting debut.

Technically, it repped Eilish’s second time on SNL, her first time appearing was as a musical guest back on the Sept. 28, 2019 episode. She performed her hit song “Bad Guy” on that episode while dancing in a rotating, mechanical box. To Americans watching, it appeared that Eilish was pulling a Gene Kelly and dancing on the ceiling. 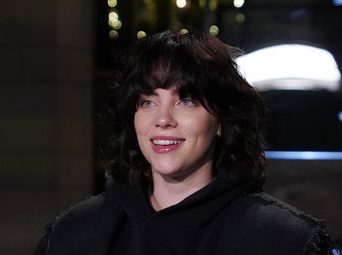 In her opening monologue tonight, Eilish made light of her poofy, candy-cane colored dress (“I’m dressed like Mrs. Claus going to the club”), gave a shoutout to her upcoming birthday (“I’m turning 20 or as the internet likes to call that: middle-aged”) and spoke about how her parents were actors as well as her producer multi-Grammy winning brother musician Finneas Baird O’Connell.

“It was my dream to be in a movie, and I remember when that dream died: Yup, I was nine,” remembered the singer.

“My mom wrote a film inspired by her life. This is true. She cast my brother Finneas as her son. She played the mom. And in the movie she had no daughter!” exclaimed Eilish, “So, yea, I got the hint.”

What Eilish didn’t mention in her opening monologue was how her mom, Maggie Baird, was an alum of LA’s comedy theater The Groundlings, a huge training ground for SNL, which produced such talent for the NBC sketch show as Chris Kattan, Will Ferrell, Phil Hartman, Kristen Wiig, and more. Baird was a Groundlings main company member and teacher from 1994-2000, and the film that Eilish was referring to tonight which her mom co-wrote and starred O’Connell was Life Inside Out.

“The scary thing about growing up in the public eye, is that people decide that everything you say, and do, and look like, is who you are forever,” said the singer in near self-deprecating fashion, “That’s not fair.”

“Would you want to be judged by the way you presented yourself at 16? Uhh, no. Imagine being current day Colin Jost! And the first thing that comes up when you Google yourself is 16-year old Colin Jost.”

At which point a teenage photo of Jost flashed on screen next to Eilish.

“But the point is that it takes time and effort to accept who you really are; you’ll be so happy that you did.”

‘West Side Story’ Opens To Lackluster $10M+, Will Spielberg Pic Be Holiday Sleeper?