Roger Ebert was never a fan of the “Star Trek” franchise, whether the movies with the “Original Series” cast, the “Next Generation” cast, or the 2009 J.J. Abrams reboot. But he saved his most withering barb for the franchise in, oddly enough, his glowing review of “Star Wars: Episode I — The Phantom Menace.”

“As for the bad rap about the characters,” the late critic wrote of George Lucas’s opus, “Hey, I’ve seen space operas that put their emphasis on human personalities and relationships. They’re called ‘Star Trek’ movies. Give me transparent underwater cities and vast hollow senatorial spheres any day.”

Ouch. But here’s the thing: “Star Trek: Discovery” Season 4 has reached that level of eye-tickling worldbuilding and has done so seamlessly. The season premiere, titled “Kobayashi Maru,” actually has a couple scenes set in a transparent underwater city that’s gorgeous to behold. Eat your heart out, Gungans.

“Discovery” went from being a prequel to “The Original Series” to a show suddenly set 900 years later, with the title ship traveling through time to the far-flung 32nd century in its third season. And it proved an opportunity to shake up the look of the whole franchise. If “Star Wars” always featured planets defined by one climate, “Star Trek” all too often featured planets defined by one very set-looking set. Suddenly, though, the show featured location photography in Iceland! A new time period as its setting meant the need for a new aesthetic.

In Season 4, the visual palette gets yet another new addition: the Toronto-based production featured an AR wall for the first time, as “Trek” franchise guru Alex Kurtzman previously told IndieWire, and it’s responsible for that underwater city set. The location? Kaminar, aquatic home of the Kelpiens and Ba’ul, now united after centuries earlier having been locked in a prey-and-predator relationship. Saru (Doug Jones), the Spock-like character of the show who always found himself between worlds, has settled on his home planet once again. But, of course, his heart remains with Starfleet.

Home, where we find it and what happens when we lose it, is a major theme of the new season. When Saru left Kaminar to join Starfleet he thought he’d never be able to return again. That’s the situation the entire Discovery crew found themselves in when they jumped to the 32nd century. All their loved ones? Dead for over eight centuries. Nothing but a blank slate was before them, but what better way to write on it than with the structure and discipline and meaning that comes from wearing a Starfleet uniform?

The show’s star, Michael Burnham (played by Sonequa Martin-Green), given the most transformative four-season arc for any “Trek” series lead in the franchise’s history — from war-igniting traitor to a beloved captain, from a logic-obsessed Vulcan wannabe to someone embracing her full humanity — is finally in the captain’s chair. Home for her is Starfleet Command, which she and her crew discovered last season to be a shell of its former self in this strange future. Months after Discovery defeated a pirate threat, the peaceful galactic government is now on the rebound. It’s even added some new worlds back under its aegis, aided by the discovery of a dilithium planet that’s about to make interstellar travel easier than it’s been in over a century. 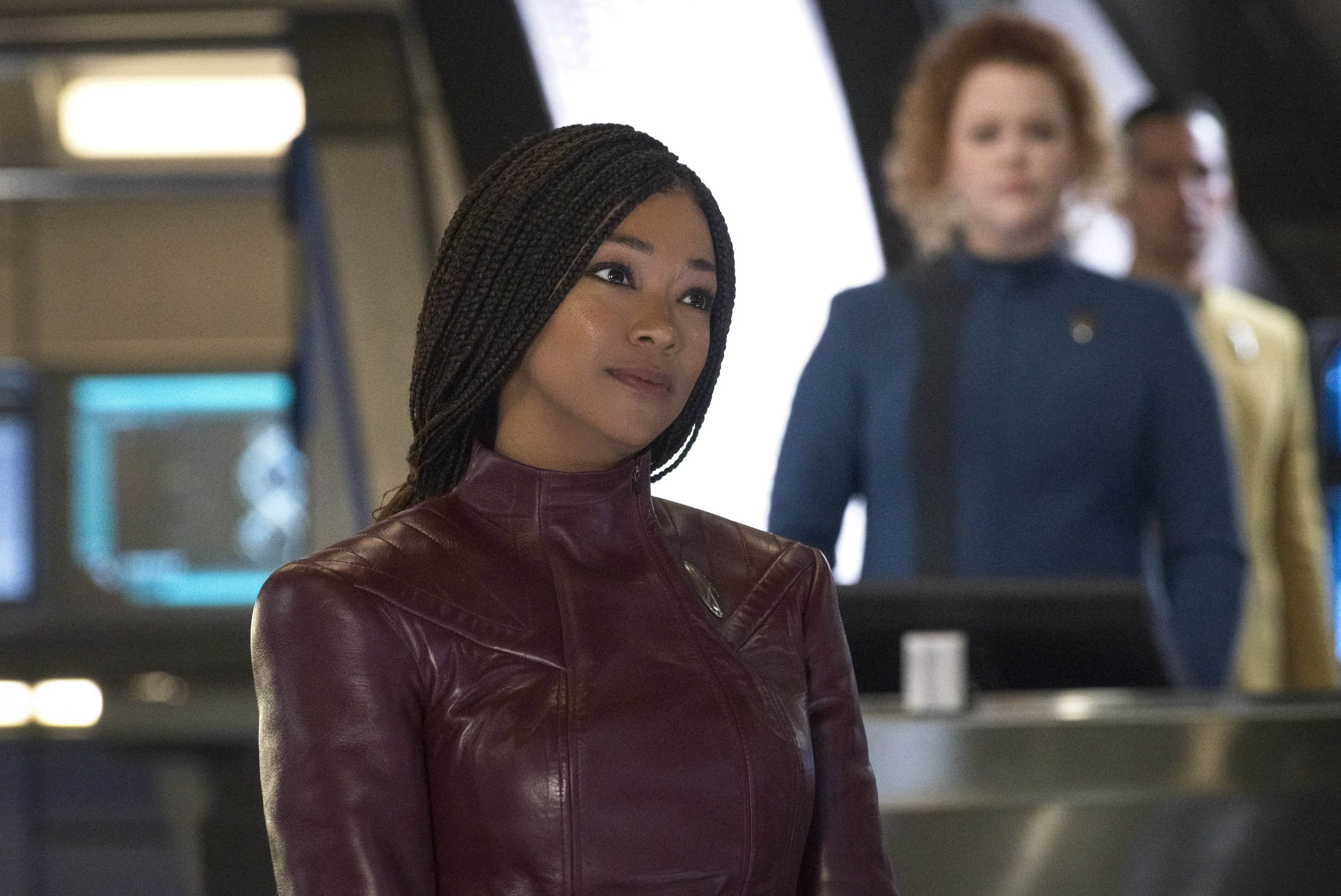 Burnham takes to the captain’s seat like the pro she is — and has a stylish new away-mission uniform! Is that pleather?

When we meet Burnham to start Season 4, “Discovery” gives us a cold open where she and her friend, lover, and honorary Discovery crewman Book (David Ajala) are trying to extend an olive branch to a species of “butterfly people.” It’s like the James Bond–style openings of “Star Trek Into Darkness” and “Star Trek Beyond” — it doesn’t have a ton of relevance to what comes next, but it sure is a lot of fun. And it allows for a perfect Trekkie gracenote: the hostile butterfly people are hostile for a reason, and Burnham and Book can use a little Starfleet levelheadedness to save the day for them too.

Book is also “home” for Burnham now. This is the best romance for a “Star Trek” captain since Sisko and Cassidy fell in love on “Deep Space Nine” in the ’90s. She allows herself to be vulnerable with him in ways that she never would have in earlier seasons, and it serves to highlight the remarkable performance Martin-Green has given over the (just!) 40 episodes of the series to date. The Vulcan steeliness she exuded at one time has melted away completely.

For his part, Ajala’s Book continues to defy sci-fi archetypes: initially he seemed to be a Han Solo type, a courier running missions in his zippy starship to make a few bucks and running afoul of trigger-happy gangster aliens along the way. But, other than his cat, he’s a loner and something of an enigma. Han Solo always had Chewbacca — imagine the scruffy smuggler as literally a “cat person” instead. And also unlike Han Solo, Book still has a strong connection to his homeworld, Kwejian, and his brother and nephew who live there. What happens with his family in Season 4 will summon up memories of Picard and his brother and nephew. Sad times are ahead.

The other character to get the spotlight in Season 4’s first few episodes is Mary Wiseman’s Lt. Tilly — with a poignant episode devoting a subplot to Blu del Barrio’s Adira and Ian Alexander’s Gray. There’s also ample screentime given to the Federation’s enigmatic new president, Rillak (Chelah Horsdal), whose partial Cardassian heritage symbolizes a lot of the changes for the better that have taken place since the 24th century. A lightyears-spanning “anomaly” of mysterious origin (the MacGuffin for the season and a kind of heir to V’Ger) threatens all of that. 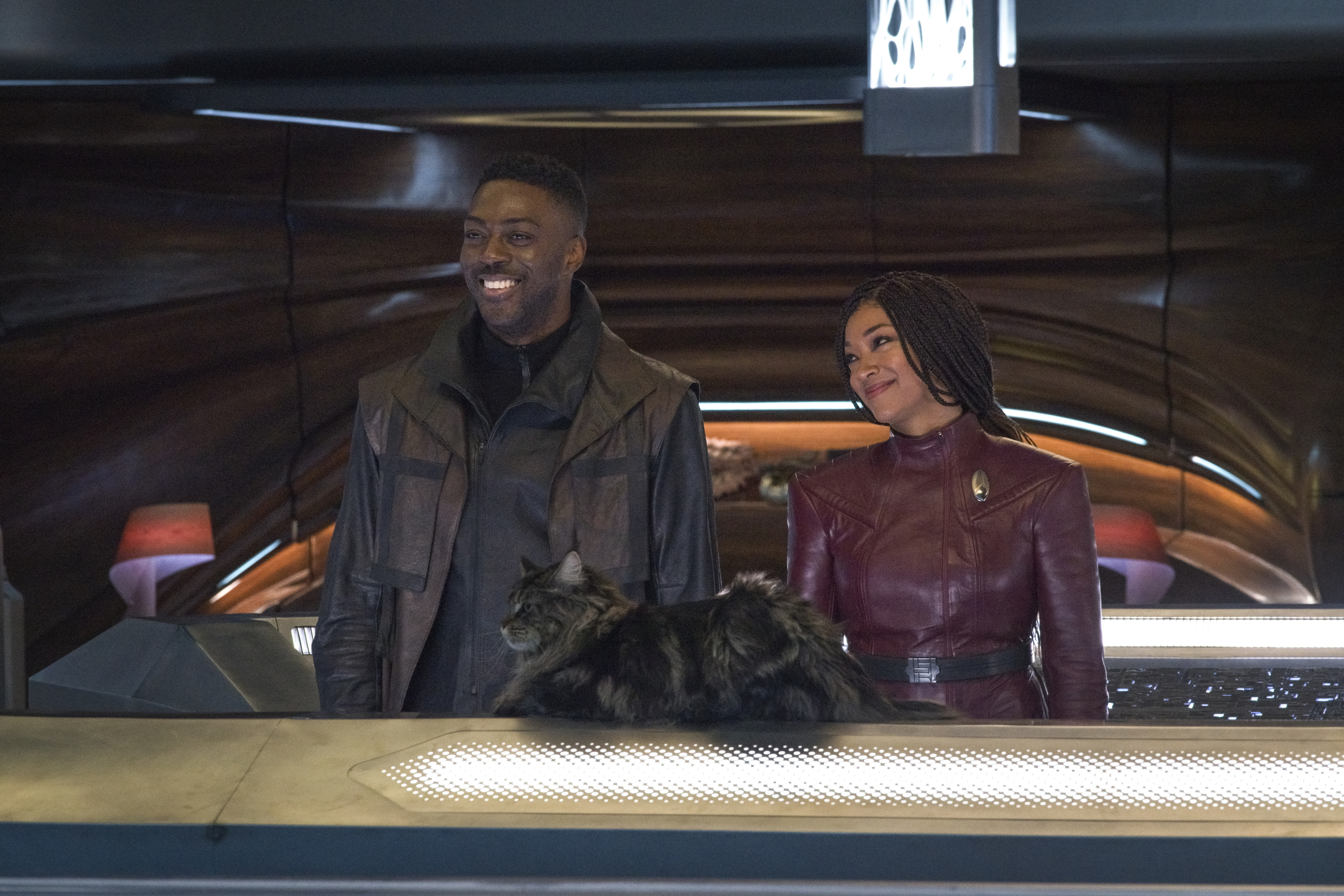 But, as his been the case with “Discovery” from the start, almost no time is reserved for the rest of the bridge crew: Nilsson, Bryce, Rhys, Owosekun, Detmer. Who doesn’t want to learn at least a few more details about each of these characters? Remember how Riker was really into jazz and played the trombone? How Data loved to paint? How Tom Paris was into 1930s sci-fi serials? How O’Brien and Bashir would reenact the Battle of Britain or the last stand at the Alamo on the holodeck? Capt. Archer once saved Earth from being blown up then unwinded by watching “Rosemary’s Baby.”

The lead characters of “Discovery” could use gracenotes like those. The genius of “Deep Space Nine” was that you felt you knew practically every character on that station, even someone like Morn who never spoke. “Discovery” reminds us of the level of characterization we’re missing in Season 4’s first episode by showing us a similarly wordless member of Morn’s species. Callbacks, not characters, appear to be prioritized now in this age of franchise storytelling, which places a premium on interconnectedness to other series within that IP over really developing its own characters meaningfully.

But if depth of character — other than Burnham — is still sorely missing from “Discovery,” at least there’s a lot of dazzle to feast on. Roger Ebert would finally have gotten his wish for “Star Trek” with this season of “Discovery,” which consistently looks better than even the last three “Trek” films. Hopefully, before long, there’ll be more than meets the eye too.

Marvel movies streaming: Can you watch movies online? Is it legal?