Home » TV and Movies » Stream of the Day: ‘Castle of Cagliostro’ Made Miyazaki a Master Director From His First Movie

A charismatic thief. A beautiful damsel in distress. A villainous count. “The Castle of Cagliostro” has all the makings of a familiar adventure story where a dashing hero rescues a princess locked away in a castle. But the one thing about “Cagliostro” that sets it part from other adventures like it is Hayao Miyazaki. The famed director was a 38-year-old animator best known for television work at the time “Cagliostro” opened in Japan in December 1979. The adventure film marked Miyazaki’s feature directorial debut, and like Orson Welles with “Citizen Kane,” Mike Nichols with “Who’s Afraid of Virginia Wolf,” and Quentin Tarantino with “Reservoir Dogs,” it marked the immediate arrival of a master filmmaker.

“The Castle of Cagliostro,” now streaming on Netflix, centers around the master thief Arsène Lupin III, made famous in Monkey Punch’s manga series “Lupin III.” Lupin robs a casino only to discover the money he has stolen is counterfeit. The thief and his accomplices travel to the country of Cagliostro, the rumored source of the counterfeit money. It’s in Cagliostro where Lupin discovers the Count is keeping a princess locked away, and he makes it his new mission to free the princess while seeking out help from his old nemesis, Inspector Zenigata, and his on-and-off lover, Fujiko Mine.

“Cagliostro” was produced and distributed five years before Miyazaki co-founded Studio Ghibli, and it lacks the emotional depth the filmmaker mines in his most iconic Ghibli films like “Spirited Away” and “My Neighbor Totoro.” But what “Cagliostro” lacks in feeling it more than makes up for in exhilarating momentum. The film lays the groundwork for the spine of Miyazaki’s cinematic mastery: Action as character building (think “Mad Max”), meticulous animation detail, the surreal blending of reality and fantasy, and heightened colors that make his films feel as sensory as “Fantastic Planet.” 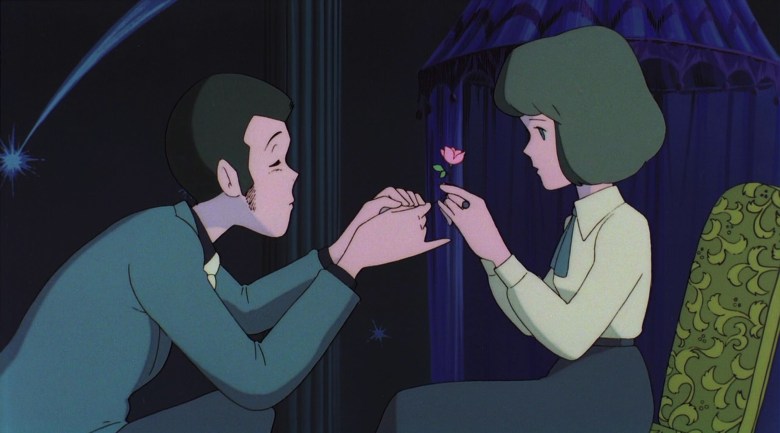 The opening scene alone blends these elements to thrilling effect as Lupin finds himself in a madcap car chase. The character’s yellow Fiat 500 draws a striking contrast with the forest greens and rocky browns of his surroundings, as well as the magenta hues of the vehicles he pursues. Miyazaki’s camera whips along with the cars as the editing blends these objects into an eye-popping anime kaleidoscope. When Lupin drives his car up the wall of a canyon, it’s a rousing leap in logic that outdoes anything in the “Fast and Furious” franchise.

“Cagliostro” functions as a perfect directorial debut because the film’s simple plotting allows Miyazaki’s directorial strengths to drive the film. Miyazaki flexes his cinematic muscles at every turn: Watch as the camera flies without limits during the opening car chase, or blocks the princess in castle rooms to magnify her isolation. The filmmaker doesn’t bother with the imaginary creatures that would later become a lynchpin of his filmography, but his knack for inspired visuals shines in a range of character designs. The Count’s wedding attire, a purple cape with a black mask, suggests Errol Flynn by way of the “Eyes Wide Shut” sex cult. The Count’s guards are spiky-fingered ninjas who move with balletic precision. And Lupin, with his bright green blazer and yellow tie, proves that even Miyazaki’s most mundane-looking characters have a singular visual style that makes them feel unique.

Like all Miyazaki movies, “Cagliostro” has an overwhelming sense of beauty. Note the scene where Fujiko Mine sneaks around the eponymous castle in order to spy on the Count and his shady financial dealings. As Fujiko wanders the castle, Miyazaki holds the wide shot, bringing all of the design elements into focus. The castle’s hallways are rendered in such painstaking detail, from wall photos to rugs and furniture, that any viewer could spend as long as the film itself studying Miyazaki’s frames and never get bored. As a first feature, “Cagliostro” positioned Miyazaki as a filmmaking wizard on the verge of greatness — and when he did decide to blend this exuberant style with more emotional storytelling, he became one of cinema’s all-time legends. Enter Miyazaki’s Studio Ghibli hits to seal the deal.

As Miyazaki continues work on his new directorial feature “How Do I Live?,” his first project since the 2013 release of “The Wind Rises,” it’s the perfect time to launch a Miyazaki movie marathon. Watch “The Castle of Cagliostro” on Netflix to get a definitive feel for Miyazaki’s filmmaking style and to get the ball rolling, because Studio Ghibli’s catalogue hits streaming for the first time on HBO Max this May.

Celebs Who Have Struggled With Insomnia