Strictly Come Dancing were left devastated yesterday when professional dancer Kevin Clifton announced he would not be taking part in the next or any future series of the show. Thoughts turn to who is going to join the team, and speculation is rife as to whether or not Oti Mabuse’s husband Marius Lepure will be taking Kevin’s place.

Each year, there are between 17 and 18 professional dancers who take part in the nation’s favourite dance competition.

Some are partnered with celebrities, while others are on standby to step in if injuries occur, as well as performing in the group numbers and professional dances.

While Graziano Di Prima was instantly paired up for the 2018 series when he was signed, Johannes Radebe had to wait until the following year and Nancy Xu is yet to be given a spot in the limelight. 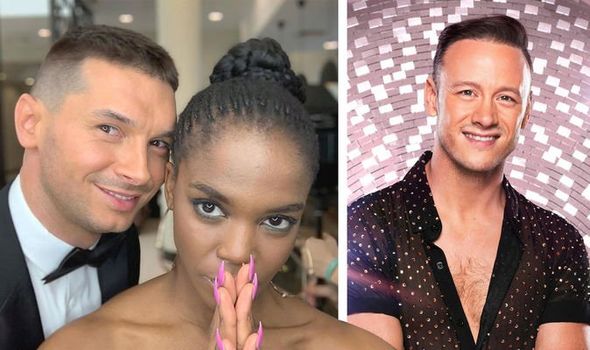 With an opening space for another male professional dancer, it could be the perfect opportunity for Marius to join.

Marius is a Romanian dancer who has previously worked on the seventh and eighth seasons of Let’s Dance, Germany’s version of Strictly which has been on the air since 2006.

He has also taken part in the Strictly ‘cruise’ tour alongside Graziano Di Prima.

A source told The Sun on Sunday: “Marius is a very talented dancer.

“For her part, Oti has told pals she would be thrilled to have him on board.”

Upon leaving the show, Kevin addressed his followers and explained why the time was right for him to move on.

“The past 7 years have been some of the most wonderful years of my life. I am grateful to the BBC and Strictly Come Dancing for giving me the opportunity to have been a part of something truly special.

“Since first being called ‘Kevin From Grimsby’ by Sir Bruce Forsyth in 2013 I have experienced the highs of 5 finals, winning a Guinness World record on It Takes Two, the Strictly Arena tour glitter ball and then the ultimate of winning the 2018 series with Stacey Dooley.

“After finishing the last series with the Children in Need trophy and the Christmas Special I want to leave on a high and have therefore decided that the time has come to move on and focus on other areas of my life and career.

“I want to thank all of the pros for inspiring me every day as well as all of my celebrity partners.

“The whole team behind the scenes have always made the Strictly family what it is and the loveliest show to work for.

“Thank you to anyone who had ever voted for me and my partners. It means the world.  And a special thank you to Jason Gilkison for always believing me,” he continued.

“To me Strictly always has been and always will be the best show on TV and has been an absolute dream and honour to be a part of.

“Pre 2013 I used to watch every week. Now I look forward to returning to being a fan and cheering on my friends who keep dancing. Kevin Clifton,” he signed off.

A statement released by the BBC read: “Kevin has been such a brilliant part of Strictly for the past seven years.

“From reaching the final an impressive five times, to lifting the Glitterball with Stacey Dooley in 2018, he has provided the show with some fantastic moments, through his exceptional talent as a dancer and choreographer.

“He will be hugely missed by fans and by his Strictly family. He will always be our Kevin from Grimsby.”

'The Bachelorette': Alum Slams Rumors That This Eliminated Contestant Will Be the Next Bachelorette

Arie Luyendyk Jr. Feels Peter Weber's Ending of 'The Bachelor' Was 'Produced More' Than His Finale