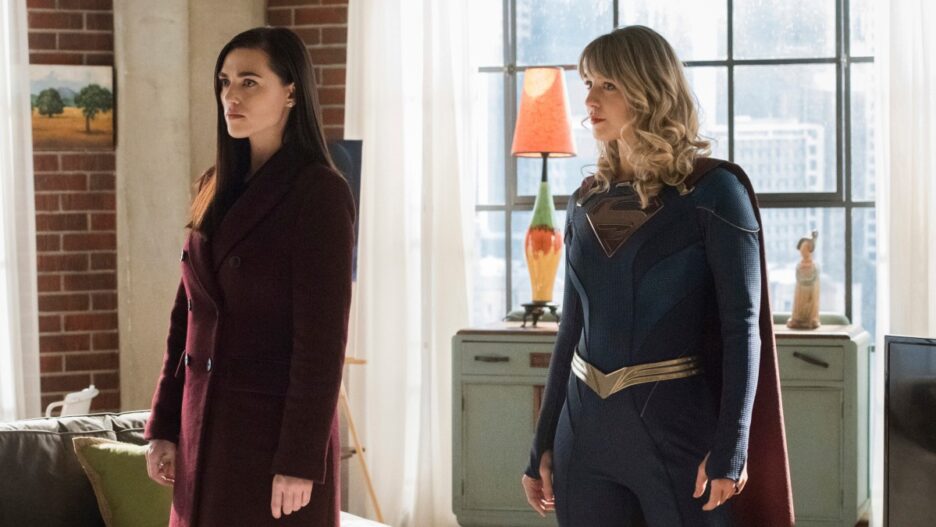 If the first seven episodes of the final season of “Supergirl” have shown us anything, it’s that Lena Luthor (Katie McGrath) was always meant to be part of the Super Friends. The good news is she’s here now, and thanks to a classic older sister pep talk from Alex Danvers (Chyler Leigh), Lena isn’t going anywhere. And now that Kara’s been rescued, Lena will have her best friend back — with no drama attached, according to the showrunners.

Sadly, Kara (Melissa Benoist) didn’t get an on-screen reunion with everyone in the mid-season finale. When she and Zor-El (Jason Behr) made it to the ship, Kara ran straight into the arms of her sister. “I got you,” Alex reassured her before the episode cut to black. According to David Harewood, who plays J’onn J’onzz and also directed the episode, there was actually a group hug between Kara, Alex and J’onn, but that scene got cut.

Obviously, we’ll see Kara back with her friends when “Supergirl” returns for the back half of its season in August. And when Kara and Lena — or Supercorp, as they’ve come to be known — do get a proper reunion, the arguing will be done and things will be much different than they were before.

“We’re looking at better days,” showrunner Robert Rovner told TheWrap. “Lena apologized to Kara in the season opener, and she goes about the first part of the season making amends for that, and is vital to the team in terms of helping them get Supergirl back. And so once Supergirl’s back, it’s their friendship, and [Lena’s] part of the team. So we’re not going back.”

“‘Stronger together.’ And finally she’s not an outsider. She’s an integral part of the super friends,” Queller added.

Indeed, Lena’s proven that many times over. In the front half of this season alone, she built a device that could track Kara through the Phantom Zone (then recalibrated it to find Phantom Prime’s chrysalis), figured out that the Phantoms are essentially bloodhounds — thus setting a new plan to find Kara into motion — and made a yellow sun grenade that allowed Kara to regain her powers in the Phantom Zone and make it to the ship. The possibilities for what she does next are essentially endless.

‘Altered Carbon’: How Inclusivity Is Hardwired Into the Future of the Netflix Sci-Fi Drama

For Life's Nicholas Pinnock: Aaron Will Prosecute the Cops Who Killed His Client 'By Any Means Necessary'