Home » TV and Movies » The Chase fans blast ‘hopeless’ Shaun Wallace over £90k loss ‘How is he still a Chaser?’

Shaun Wallace enabled three contestants to take home £90,000 between them today on The Chase after a disappointing performance in the final. The Chase fans couldn’t believe The Dark Destroyer failed to stop contestants Barclay, Gemma and Jonathan who had managed to score 18 and answer just two push backs correctly.

Jonathan kicked off today’s quiz show by adding £3,000 to the prize fund, closely followed by Gemma who won £4,000.

However, the team struggled to keep up with Bradley Walsh’s fast paced questions in the final and scored 18 in total. 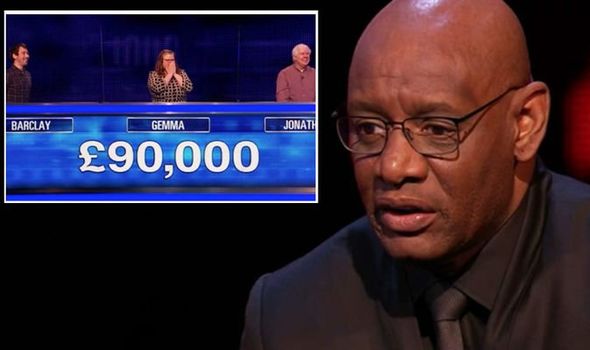 The Chase fans were convinced the contestants had ruined their chances of taking home £30,000 each.

But, Shaun answered five questions incorrectly in his final chase and narrowly missed out on beating the contestants.

Viewers were shocked by the result as one tweeted: “Jesus wept. They didn’t win that, Shaun lost. Utterly hopeless performance from the Chaser. No great shock #thechase.”

“As prove, Shaun is pony… worse Chaser by a country miler #TheChase,” another wrote.

Someone else shared: “Only Shaun could’ve messed that up, just another day at the office #TheChase.”

“How is Shaun still a Chaser #TheChase,” another viewer asked.

“I can’t believe this, but… Shaun’s pulled a Shaun?! A very expensive Shaun, too! #TheChase,” a sixth said.

Who is Peter Kay and what’s his net worth? – The Sun