Joe Exotic is the kind of personality that makes for an irresistible 60-second overview. The new Netflix series “Tiger King: Murder, Mayhem and Madness” ticks off all those boxes when it introduces him as a central figure. Before delving into the particulars that earn the show that subtitle, the audience gets to see Joe’s distinct bleached mullet, meet his husband, and witness him on the grounds of the private Oklahoma tiger zoo of his dreams. Petting massive wild animals with the loving scratches usually reserved for the necks of tabbies or labradoodles, Joe distinguishes himself from the outset.

Of course, Joe Exotic (nee Schreibvogel) is also a man who necessitates more than just a quick video snippet or morning news segment to really unpack. Fortunately, “Tiger King” fashions enough storytelling real estate to accommodate not just Joe, but “Doc” Antle, a fellow bulk tiger owner/operator of his own park, and Carole Baskin, the Florida-based subject of Joe’s escalating ire. Juggling both their individual past histories and a thorny interstate battle for supremacy in the shifting Big Tiger industry, “Tiger King” documents a world where the losses are more than noticeable and the winners are few, if there are any to be found.

To the much-deserved credit of co-directors Rebecca Chaiklin and Eric Goode, “Tiger King” largely stays out of the way of its own main attraction and wisely does the same when profiling other significant players in the world of big cats. Beginning with an opening chapter that orients each of them on a cross-country psychological chessboard, the series gathers firsthand accounts not just of their contentious relationships with Joe, but their competing philosophies over how these for-profit habitats should conduct their business. Some decry particular cub-breeding practices, others discredit various animal rights activism attempts, while all seem to harbor jealousy toward those who would seek to usurp their dominance within the realm of lion and tiger tourism. 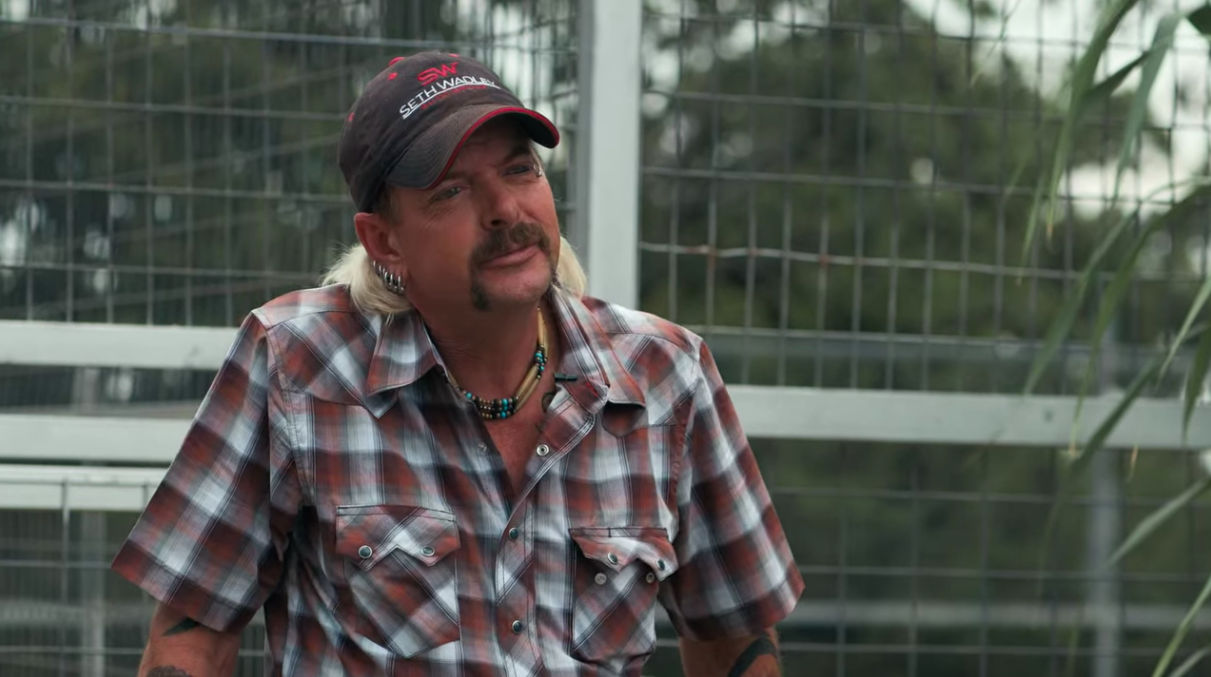 It’s past cliche at this point to describe a doc series’ quality by saying that any of its central figures could sustain a project focused solely on them. But here in “Tiger King,” that’s not only true, that’s indicative of the kind of characters that are all caught in this web. This is far from a true crime series where participants are offering up their insights reluctantly or out of some obligation to the pursuit of justice. For the most part, the series posits that these big cat stalwarts persisted in this subculture’s spotlight exactly because they yearned for it. They grew their businesses on the backs of social media crests and each made money in their own way by giving visitors to their menageries a sliver of that same selfie glory.

Without falling into the first-person narration trap that a lesser series wouldn’t have skirted, “Tiger King” benefits from having Goode as an occasional on-screen guide through some of these private worlds. This isn’t a piece of invisible reportage, and the occasional on-screen phone check-ins with Joe or mid-interview reactions to on-camera revelations don’t distract from who the real focus is at any given time. It helps situate the viewer in time, particularly as you can feel the project’s original scope give way to the scandal unfolding in front of their lenses.

In addition to having a dream treasure trove of archival footage to help illustrate the many facets of Joe, Carole, Doc and others, Goode and Chaiklin have the unexpected fortune of stumbling upon an unfolding legal case that ensnares multiple people at the center of the series. Staff members at Joe’s park and in his various online ventures start to peel back the layers of their own involvement and their own motives for trying to stick it out through some particularly bumpy passages. “Tiger King” is never overtly cagey about how it unspools its timeline, but by reserving certain key details until later episodes, it serves to challenge assumptions about who is giving these different perspectives (and, in many cases, why).

Rather than use dramatic flourishes and overbearing stylistic tics to insist on how outrageousness some of these developments are, the show lets these individuals speak for themselves. Without underlining that it’s doing so, the “Tiger King” pendulum swings between showing Joe (and others in positions of authority in this self-contained ecosystem) as human beings and grifters. In the end, it lands on the fact that people can be — and often are — both. Specific in outlining some of the practices that circumvent health codes and labor laws and basic ethics tests, there’s an underlying hypothesis that these problems might not be endemic to the exotic animal world, but anywhere where profit and glory have the potential to eclipse dignity and good judgment. 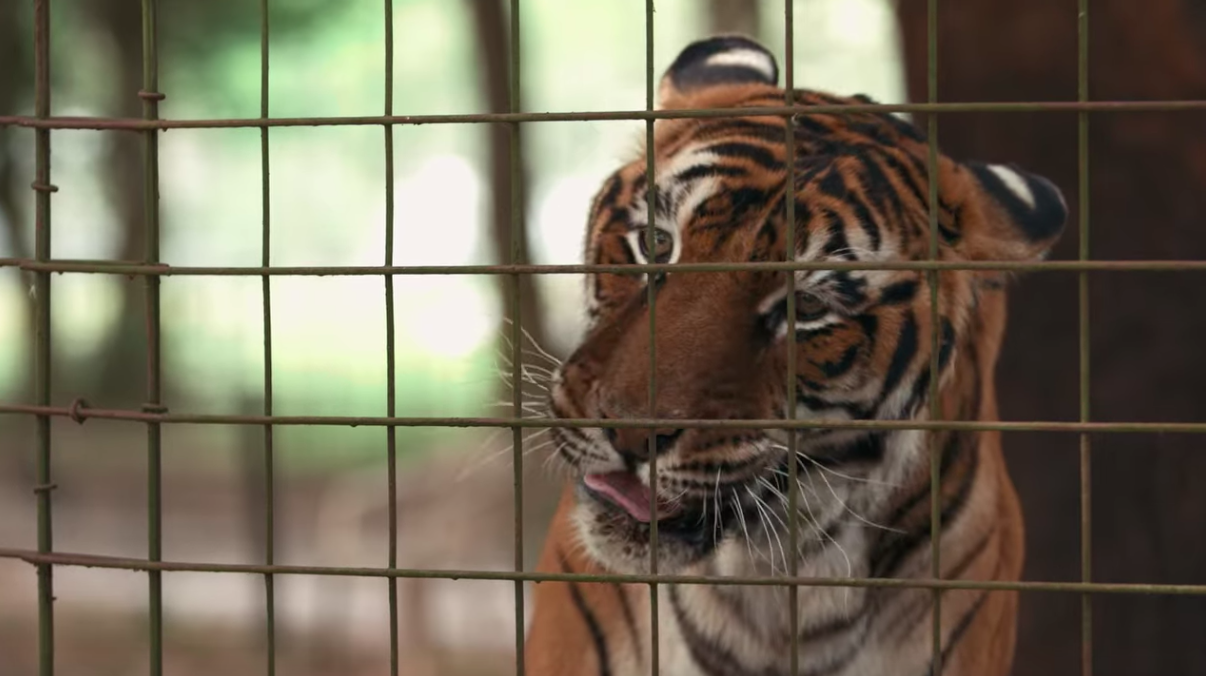 Only toward the end of the series, as it catches up to its own in medias res beginning, does “Tiger King” start to fall back on some genre tropes to help add the story’s final criminal layer. Where the series really succeeds, though, is by centering on the people themselves rather than the things they do. “Tiger King” embraces that by continuing to let these people’s words speak for them, particularly the ones they never thought would ever be up for public consumption.

Bypassing any expected blanket condemnation of this entire hobby/scheme/moneymaking enterprise, “Tiger King” has a considerable amount of empathy for nearly everyone involved. It doesn’t excuse certain choices or patterns of behavior, but over these seven episodes, there’s enough ground to consider the people involved in full. “Tiger King” isn’t pointing a paw at any one villain or any single scapegoat in this messy web. With varying degrees of subtlety, Goode and Chaiklin set up contrasts not just between individuals like Joe and Carole, but between their public statements and their actions. In the process, the show becomes a fascinating prism for people’s intentions, corrupted and otherwise.

And even with all the human subjects, the animals are ever-present. Amidst talk of conservation and protection, there’s an unspoken indictment of a self-contained world that can allow some of the behavior that “Tiger King” documents while still arguing for its own continuation. Regardless of who’s at fault, “Tiger King” is littered with stories of both animals and people who were used until they were no longer useful. Up through the series’ parting sequence, which squares one individual’s punishment with a moment of self-reflection, “Tiger King” manages to tell an electrifying story with an open mind, a shrewd eye, and a delicate touch.

“Tiger King” is now available to stream on Netflix.