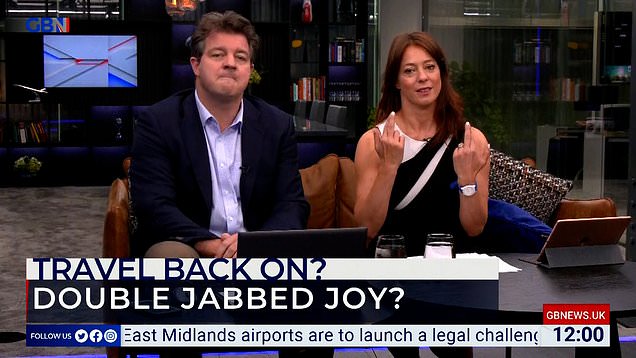 In a moment that had us spitting out the Coca Cola Cristiano Ronaldo would never touch, a GB News presenter appeared to stick her middle fingers up at the camera during a live segment today.

We can’t blame viewers for fearing the worst, seeing as the network’s production team has been frantically dealing with noise complaints with programmes sounding like they’ve been recorded in the gent’s toilets and filmed with a Go Pro, as well as misspellings of guest names and prank calls getting through the gates.

Today’s midday show had barely kicked into gear when Gloria De Piero and Liam Halligan were discussing travel doors being opened back up (while Halligan’s microphone wasn’t working, that’s what the lower third suggested).

At one stage in a blink-and-you’ll-miss-it moment, though, De Piero then brought her hands up and appeared to flip the bird to the gallery. With both hands.

Sadly, for those who felt perhaps this was another gotcha moment, DePiero was instead crossing her fingers (we’re going with benefit of the doubt here) in reaction to the travel news.

Still, the scene hasn’t stopped many a punter from reacting with feverish gusto, as they wondered whether they’d noticed a crude blunder from the newly-launched channel.

‘Did I just see @GBNEWS presenter @GloriaDePiero give the bird to the camera with both hands thinking she wasn’t on air?’ one viewer asked on Twitter. ‘Yes I did.’

Soundchester UK also spotted the moment and shared it on Twitter, writing: ‘Not even ten seconds into the 12 o clock show and the presenter just gave two middle fingers to the camera live on air!’

However Dan Barker supported the crossed finger theory, adding: ‘My guess: There’re sound issues & so we can’t hear him. They’ve asked her to do the intro instead. She crosses her fingers hoping her sound comes through.’

Others supported the idea she was innocently crossing her fingers, as one shared a screenshot that had been massively brightened in which De Piero’s pointer could be seen, ever so slightly, poking out from behind her middle finger.

Ah, everyone loves a bit of midday madness to liven up the day!