Cruise ships hit by coronavirus outbreaks have quickly found themselves with no ports for thousands of passengers as countries on four continents have quarantined vessels or kept them at sea for days.

Keeping all of the passengers on board instead of letting them disembark on land is a strategy that can backfire, however, according to experts, because the ventilation systems and close quarters of cruise ships make them ideal places for illness to jump from one person to the next.

"They're not designed as quarantine facilities, to put it mildly," said Don Milton, an epidemiologist with the University of Maryland.

A ship with about 3500 people aboard was sailing in circles off the coast of California on Saturday after 19 crew members and two passengers tested positive for the new virus. Originally bound for San Francisco, the Grand Princess might be sent instead to a non-commercial port, officials said. 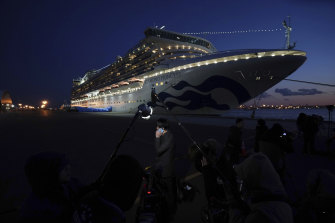 The Diamond Princess cruise ship was quarantined off the Japanese coast.Credit:AP

While restaurants and other shipboard locations were closed, passengers were able to watch TV and use the internet, or if they were lucky enough to have one, go outside on their balcony overlooking the water.

Passenger Karen Schwartz Dever said she and her husband were enjoying their balcony and keeping themselves busy with playing cards, while meals and water were being delivered by room service. But she worried about some of the other passengers.

"I met someone who is in the middle of chemo for cancer," she said. "There are people on oxygen. There are also children on board. I can't imagine what it's like if they are in an inside cabin."

While President Donald Trump has said he doesn't want the Grand Princess to dock, he also said he would yield to the advice of health officials. Refusing to let the ship into port for an extended period could hasten the spread of the virus among the people on board, experts said.

Milton, who studies the spread of virus particles in the air, said the recirculating air on a cruise ship's ventilation system, along with people living in close quarters and in communal settings, make the vessels vulnerable to the spread of infectious illnesses.

"You're going to amplify the infection by keeping people on the boat," he said.

A Purdue University air quality expert said cruise ship air conditioning systems are not designed to filter out particles as small as the coronavirus, allowing the disease to rapidly circulate to other cabins.

"The passengers should be quarantined on shore if there is a suitable facility," Qingyan Chen said in an email message. Grand Princess "should run 100% outdoor air in their air conditioning system and not use recirculated air."

Also in California on Saturday, a Carnival cruise ship returning from a weeklong trip to Mexico was held at the Port of Long Beach after a passenger was taken to a local hospital to be tested for coronavirus, said city spokeswoman Kate Kuykendall. She couldn't comment on the woman's condition, but said she was being tested out of an abundance of precaution. It wasn't clear how many passengers were on the ship.

In Japan, leaders were criticised for confining more than 3700 passengers and crew on the Diamond Princess for two weeks last month because of the virus. About 700 people were sickened on the ship and three died. Japanese health officials defended the quarantine as necessary and adequate.

In Asia, the Malaysian port of Penang turned away the cruise ship Costa Fortuna with 2,000 people aboard because there were 64 passengers from Italy, the centre of Europe's epidemic. It was the second port after Phuket in Thailand to reject the ship, which is now headed to Singapore.

In Egypt, a cruise ship on the Nile with more than 150 aboard was under quarantine after 12 people tested positive for the virus. And on the Mediterranean in Malta, which reported its first case of the virus, the MSC Opera agreed not to enter port even though there were no infections confirmed on board.

Art Reingold, head of the epidemiology and biostatistics division at the University of California, Berkeley School of Public Health, said the burden is on authorities to coordinate the feeding and care of so many people without spreading the infection further.

"It's obviously going to be a real challenge," he said. "I don't have any doubt that crew members interact with passengers, so it seems quite plausible there could be additional transmissions."

The challenge is not an entirely new one: Ships have previously been affected by other diseases, such as norovirus, which causes vomiting and diarrhoea and can spread quickly in the close quarters of a ship and among passengers with weakened immune systems.

Biden to allow at least 10,000 deported asylum seekers to RETURN after they were dismissed by Trump for missing court

How Prince Harry and Meghan Markle's new baby could be American