Flashpoint Batley: Anti-racism protesters hold rally against supporters of Tommy Robinson-backed anti-Muslim candidate – a day after Jo Cox’s sister was heckled by Muslim protesters ‘over her support for LGBT rights’ with five days until poll

Hundreds of anti-racism protesters have marched through Batley as a rally was held to support a anti-Muslim For Britain candidate the the by-election.

Stand Up To Racism groups in Kirklees, Leeds and Wakefield held the counter-demonstration to fight against growing support for the anti-Muslim For Britain founder Anne Marie Waters.

It came amid reports former leader of the English Defence League Tommy Robinson would be at a rally in the West Yorkshire town.

Waters is one of 16 candidates hoping to become the new BP of Batley and Spen in the by-election on July 1.

For Britain, which was denounced by Nigel Farage as ‘fascist’ and is made up of former British National Party (BNP) members, was expected to stage an anti-Muslim demonstration today, but its numbers dwindled compared to 400 anti-racism protesters.

The by-election will be held following the resignation of Tracy Brabin, who was elected Mayor of West Yorkshire.

Some 100 police officers were at the protest as surrounding forces were drafted in to ensure the rallies were peaceful.

A total of three arrests were made – two for public order offences and a man was also arrested for possession of an offensive weapon. 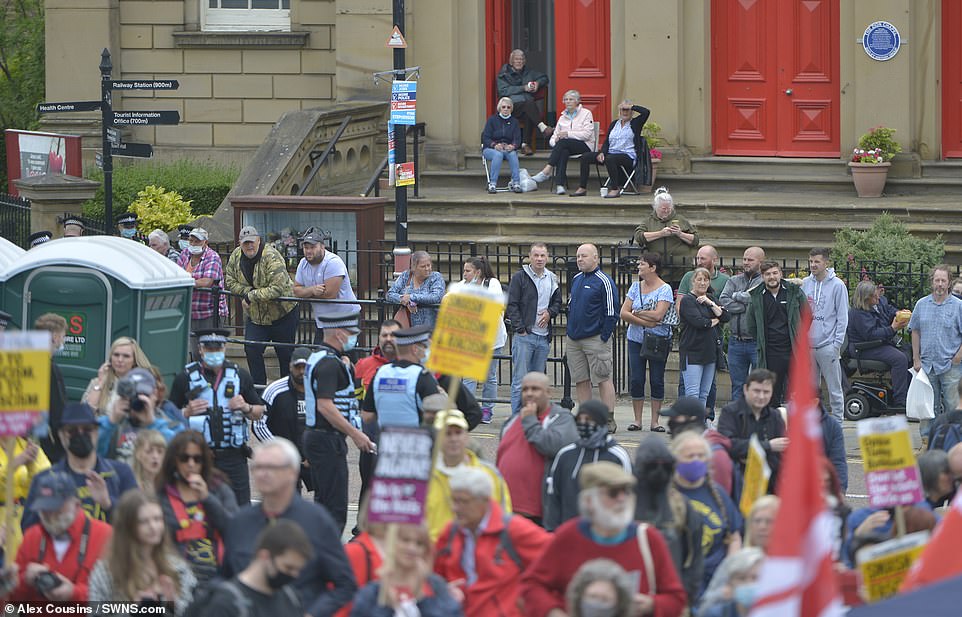 Officers were forced to stand between the two groups as a stand-off happened in front of Jo Cox House, the building named in memory of the murdered former Batley MP 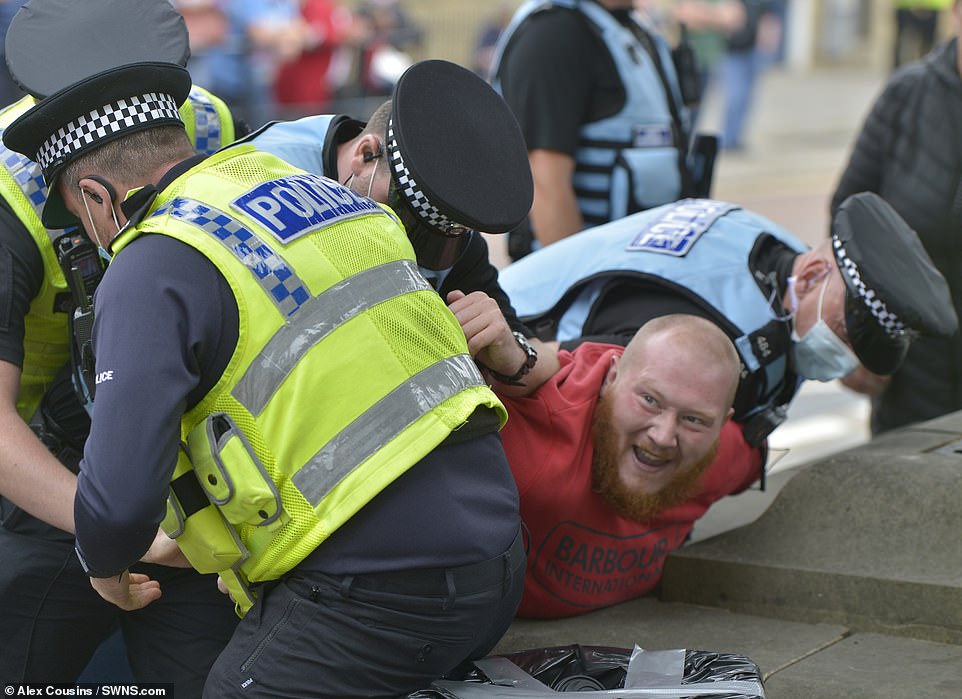 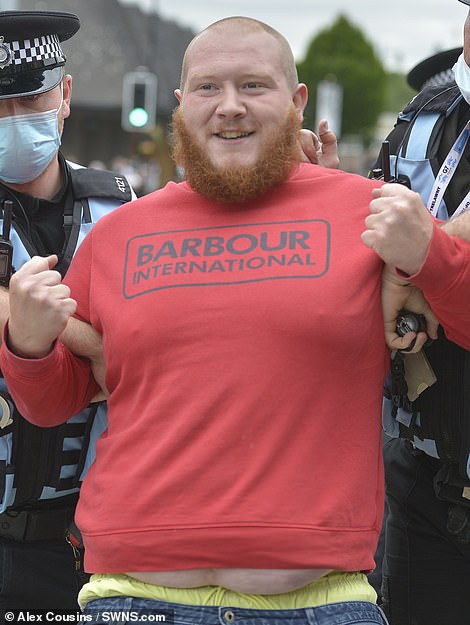 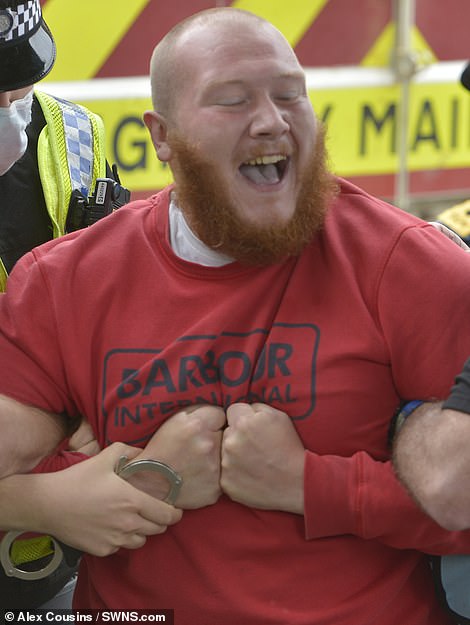 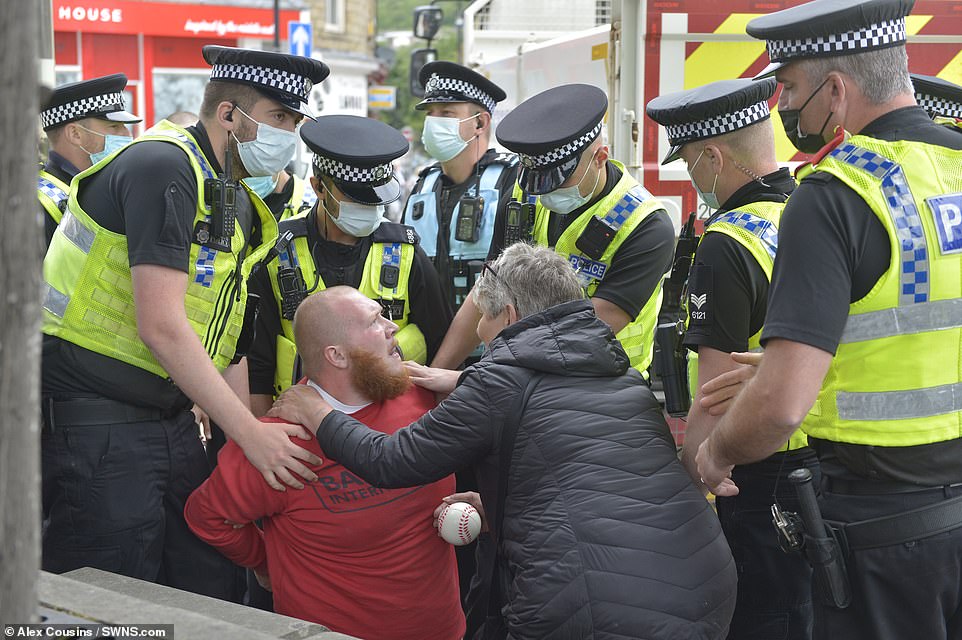 As the man was brought to the ground his expression changed, with one woman trying to console him 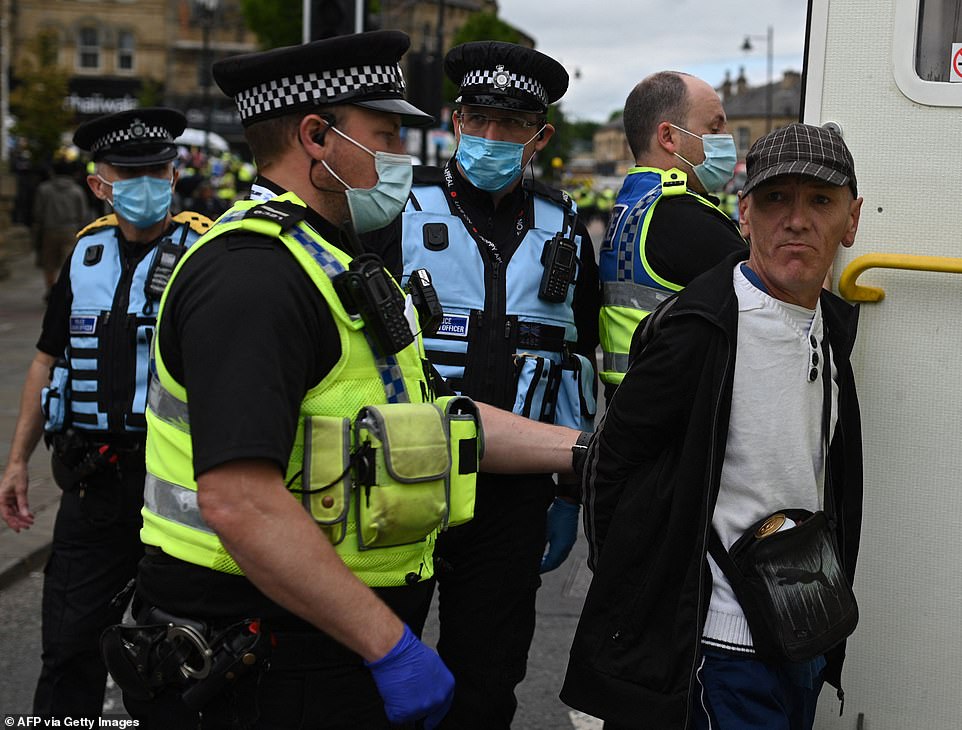 Officers also assisted with two people who were believed to have suffered medical episodes.

Police vans were parked along Commercial Street and officers lined the centre of the town as the Stand Up To Racism march was met with hostility.

Officers were forced to stand between the two groups as a stand-off happened in front of Jo Cox House, the building named in memory of the murdered former Batley MP.

The Stand Up To Racism Kirklees speaker who organised the rally said: ‘I think today has been a massive victory for the anti-racist movement. Have a safe journey home everyone.’

It comes a day after Jo Cox’ sister, Labour candidate Kim Leadbeater, was shouted at in the street by an anti-LGBT and anti-Israel campaigner from Birmingham.

A video shared on Twitter showed Ms Leadbeater defending herself verbally as she was challenged in the street about ‘LGBT indoctrination in schools’.

Before she walked away to her car and was repeatedly shouted at, she responded: ‘This is my community. Don’t come here and shout at me in the street. The Muslim community of Batley & Spen deserve better than this.’

However, Mr Galloway, who is standing against Ms Leadbeater in the by-election, called the claim a ‘lie’ and said he had ‘never seen’ the man who shouted. 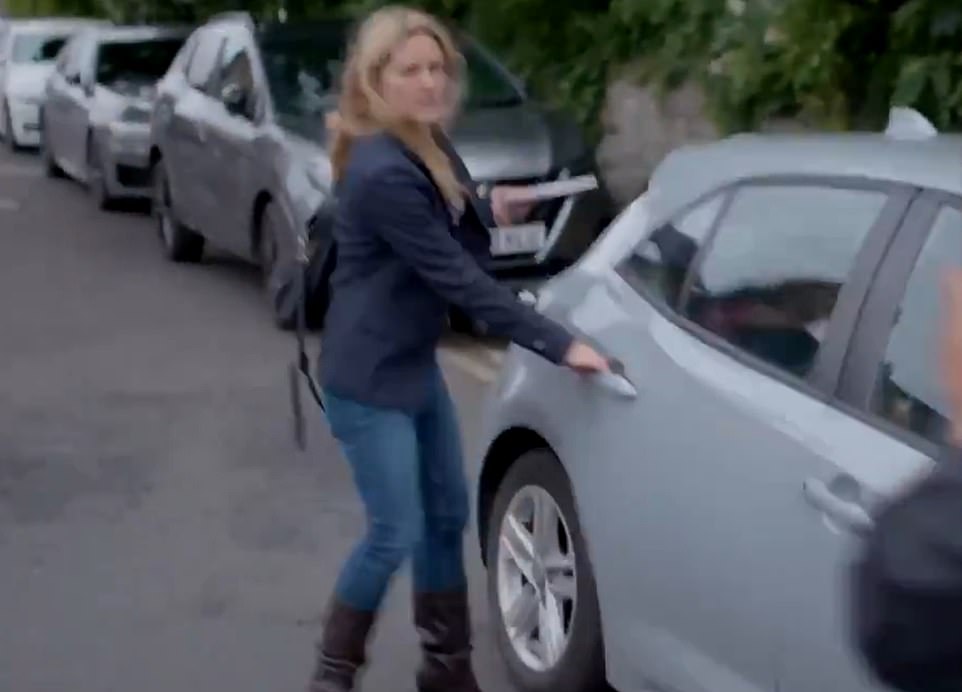 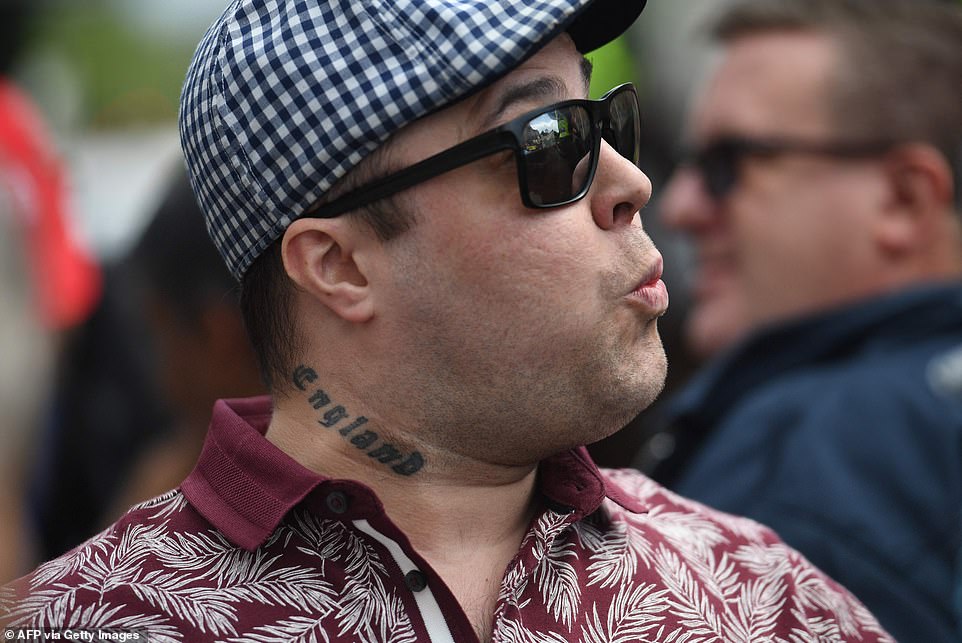 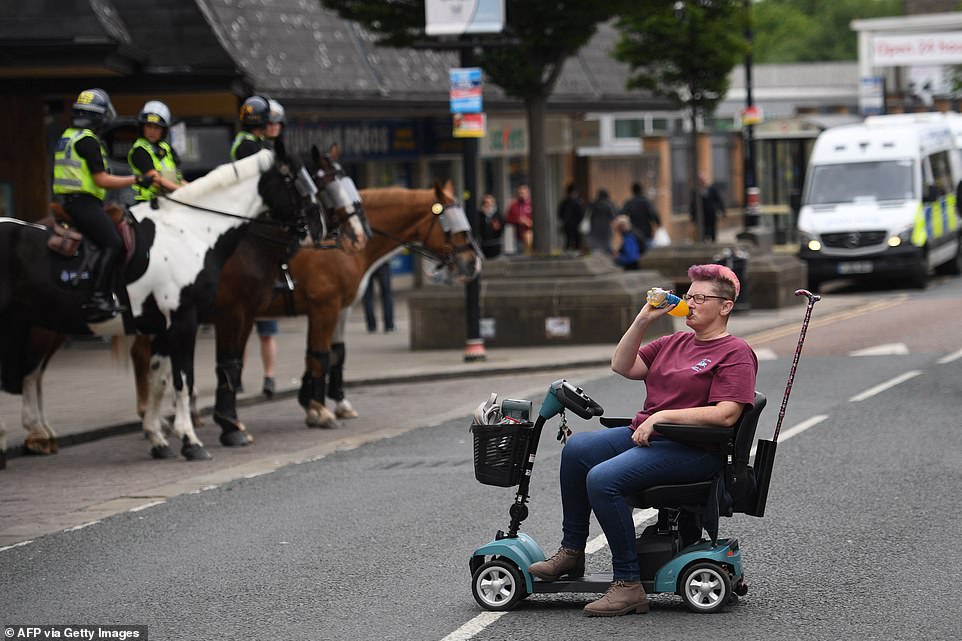 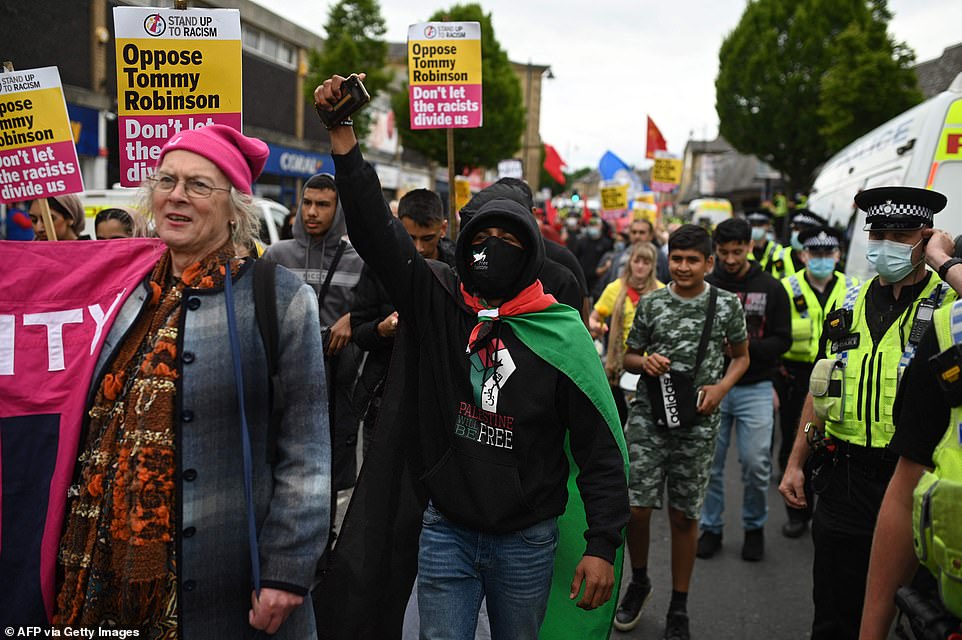 At the anti-racism rally protesters held up signs that read: ‘Oppose Tommy Robinson. Don’t let the racists divide us’ 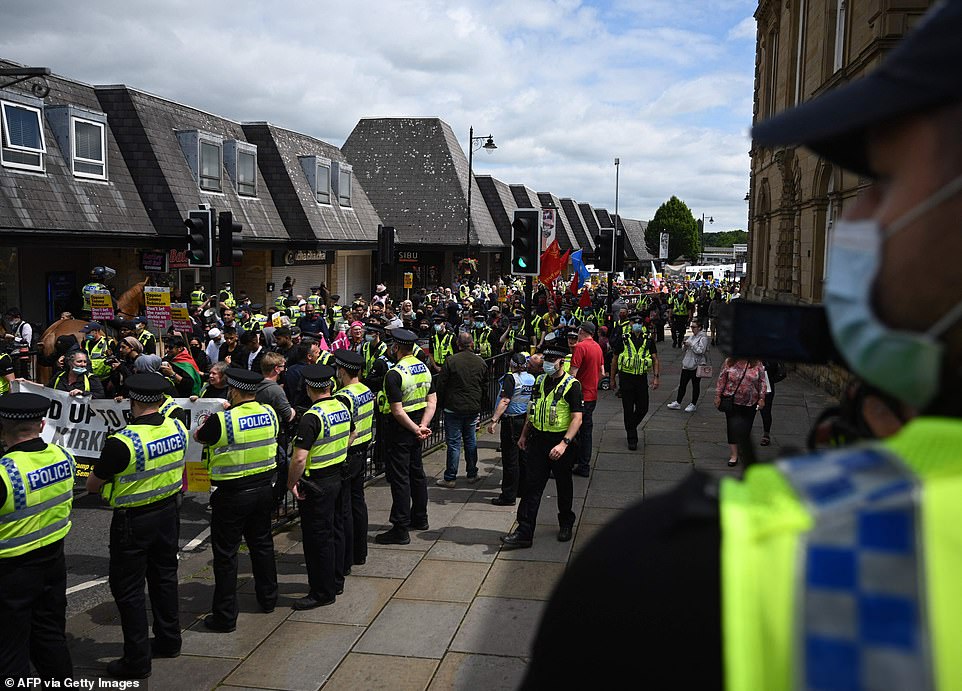 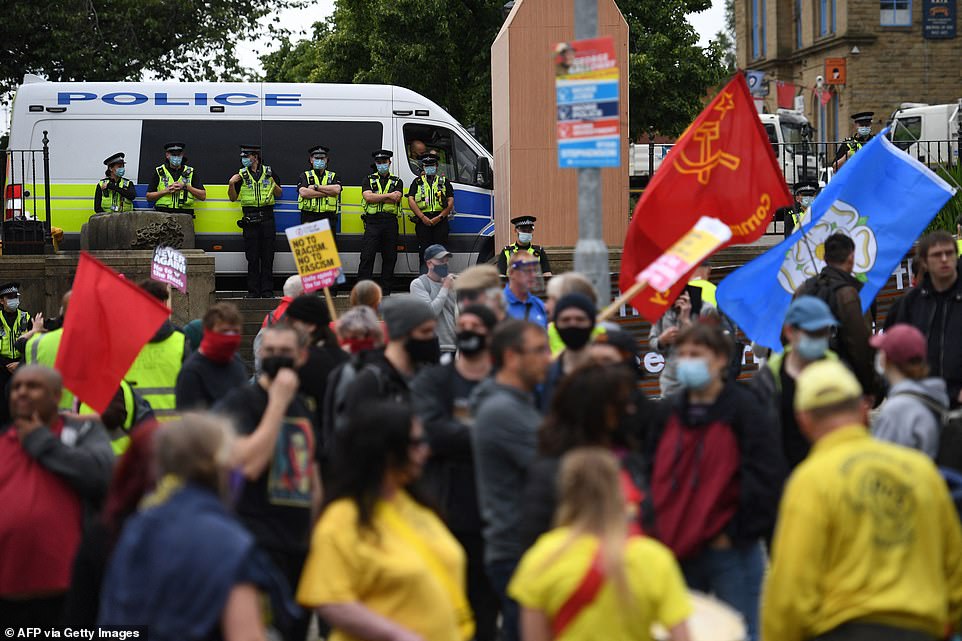 Assistant Chief Constable Scott Bisset, who led the policing operation, said: ‘I would like to pass on my gratitude to the local residents and visitors of Batley, partner agencies as well as all officers and staff, for their conduct and co-operation during the demonstration this afternoon, which only caused minor disruption for a short time in the town centre.

‘We ensured we had appropriate resources including assistance from additional high visibility police officers, to minimise the disruption caused as much as possible.’

‘Our overall aim was to ensure that the demonstrations remained peaceful and was effectively managed, so that the wider public were able to go about their business unaffected.’

Biden is mortgaging our future with more spending, debt and taxes than ever before