Barron Trump was seen towering over his mother, Melania, on Wednesday as the mother and son duo left Trump Tower, where the former first family has been staying while in New York.

In photos obtained by DailyMail.com, Barron Trump, now 16, appeared to be taller than his mother, as well as many others he passed by as he carried Melania’s a limited edition orange Louis Vuitton bag, while his mother carried a $11,000 black Hermes Birkin bag.

She wore a fashionable black button-down shirt with white pants that she matched with $645 Louboutin pointy-toe flats, while Barron wore a plain black shirt tucked neatly into his blue jeans. 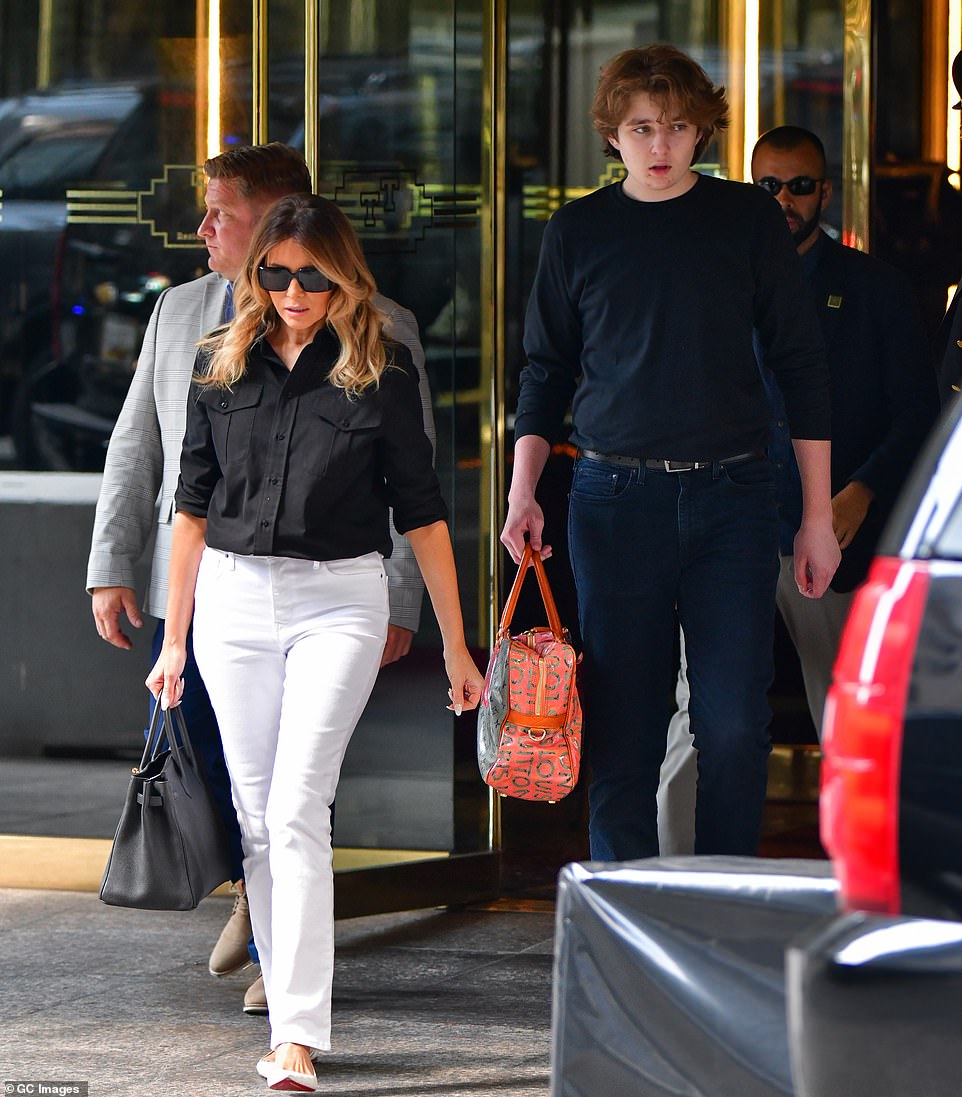 In photos of the mother and son, Barron can be seen towering over his mother as he carried her limited edition orange Louis Vuitton bag

Melania wore a stylish black button down, tucked into her white pants that matched her $645 Louboutin pointy-toe flats

That makes him taller than both his parents and all of his siblings.

The former president is reportedly either 6-foot-3-inches or 6-foot-2-inches, according to the International Business Times, while Melania, a former model, stands at 5-feet-11-inches.

Just last year,  the International Business Times reported that Eric was the tallest of all the Trump children at 6-foot-5-inches, but that has clearly changed with Barron’s most recent growth spurt. 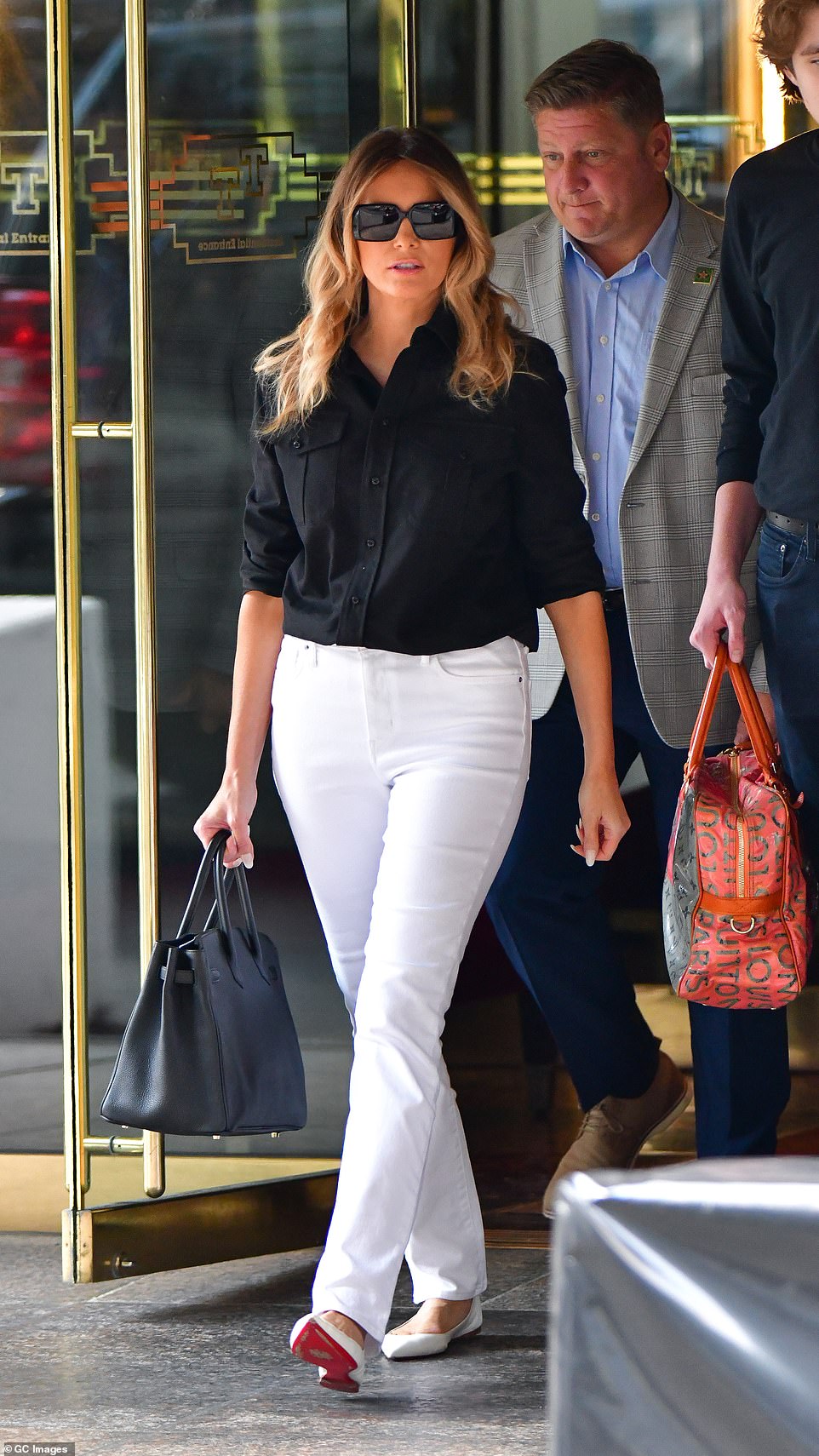 Melania carried her $11,000 black Hermes Birkin bag as she walked to a car 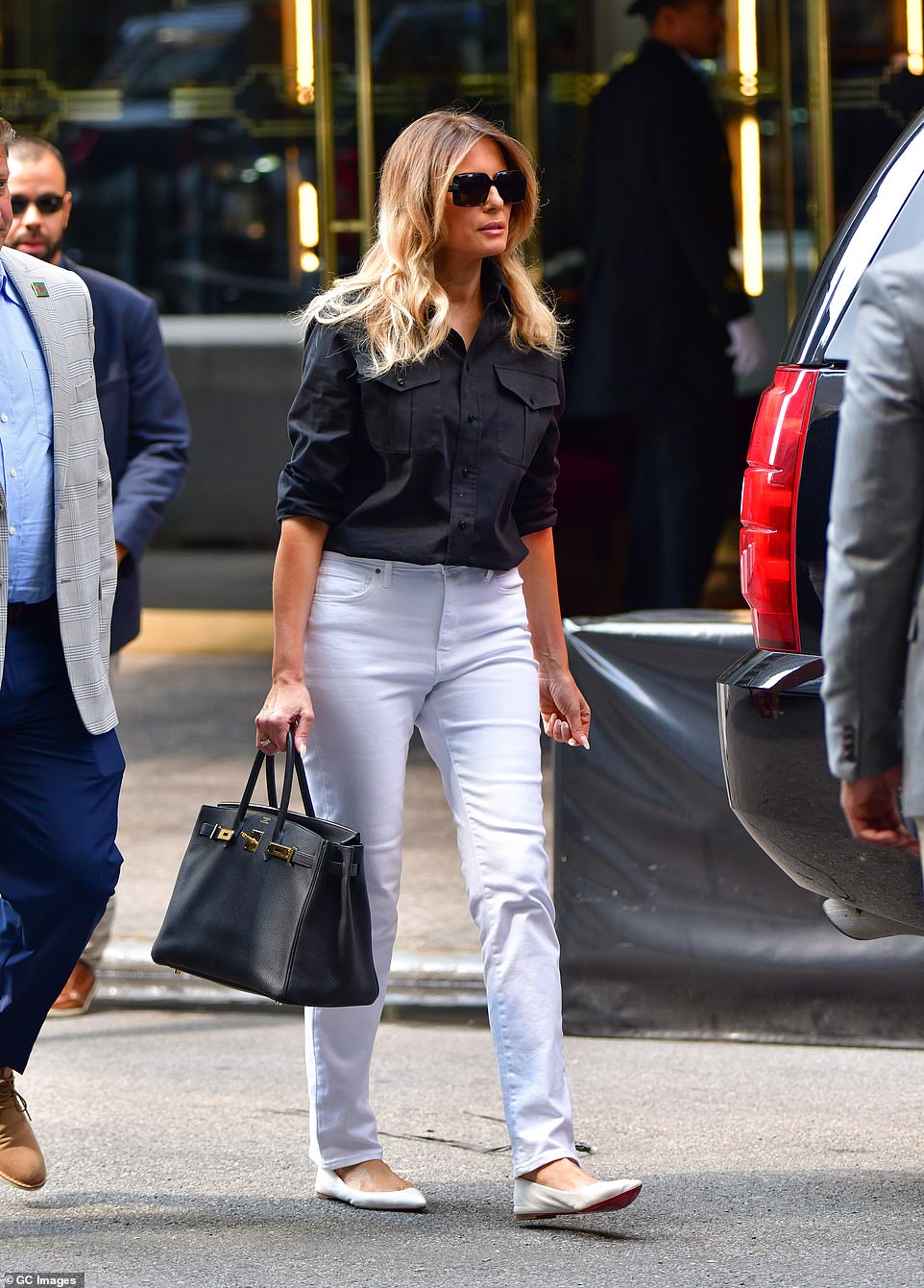 She has been staying at Trump Tower with former President Donald Trump since Saturday night, when he held a rally in Sarasota, Florida 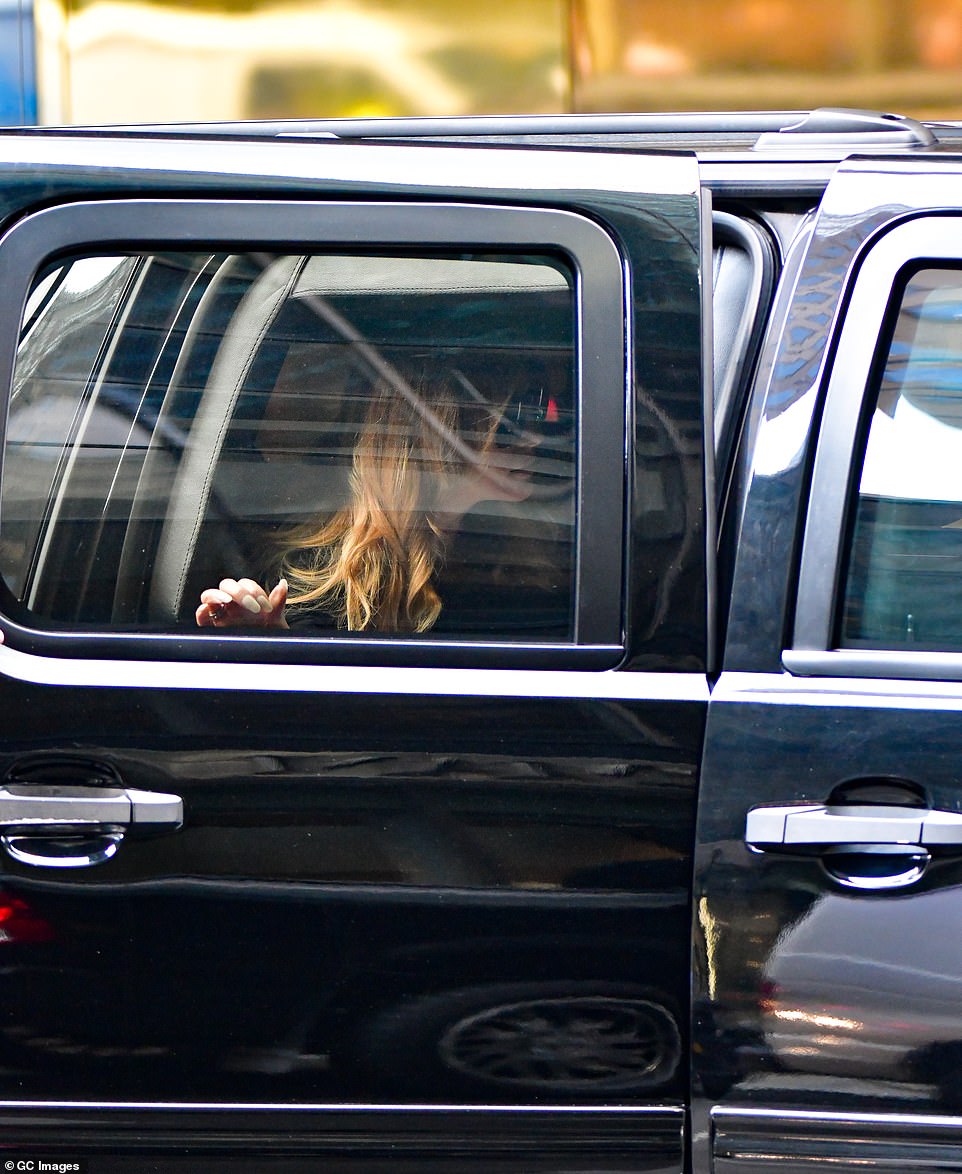 Melania was photographed getting into a car and driving away from the Fifth Avenue residence on Wednesday. It was unclear where she was going 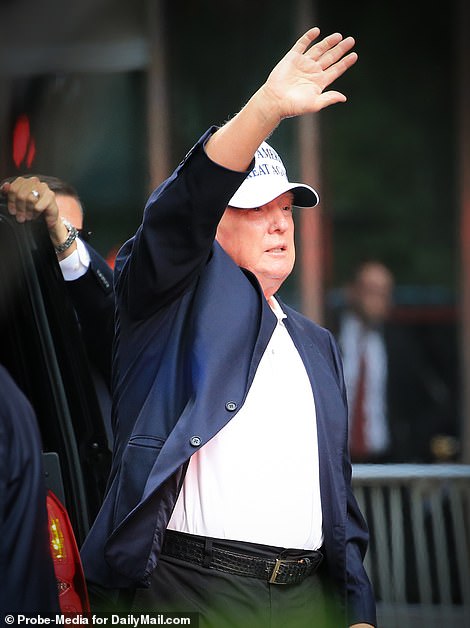 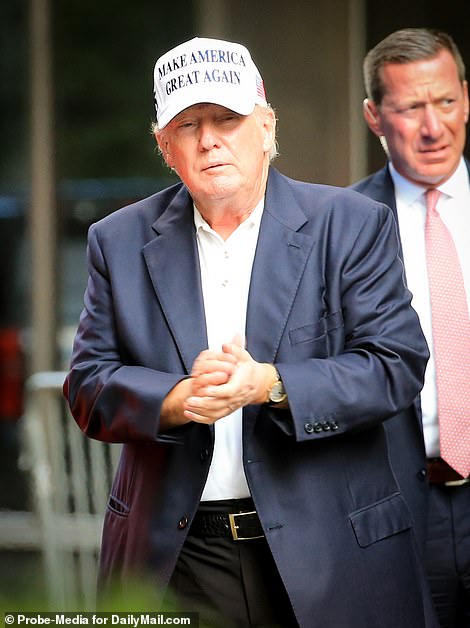 Just three days earlier, Trump was seen wearing a white MAGA hat as he waved to his supporters while arriving in the Big Apple

The Trumps’ recent outing comes just three days after the former president was seen arriving at the Fifth Avenue residence, while on a visit to his home state after a rally in Sarasota, Florida on Saturday.

He was seen wearing a white MAGA hat as he waved to a group of supporters that had gathered outside the building. Melania and the couple’s son Barron, however, were nowhere to be seen at the time.

The Trumps were largely based in Manhattan before Donald was elected president in 2016.

The couple, however, decided to relocate to the president’s resort in Mar-a-Lago after leaving the White House in January and have maintained a relatively low profile since. 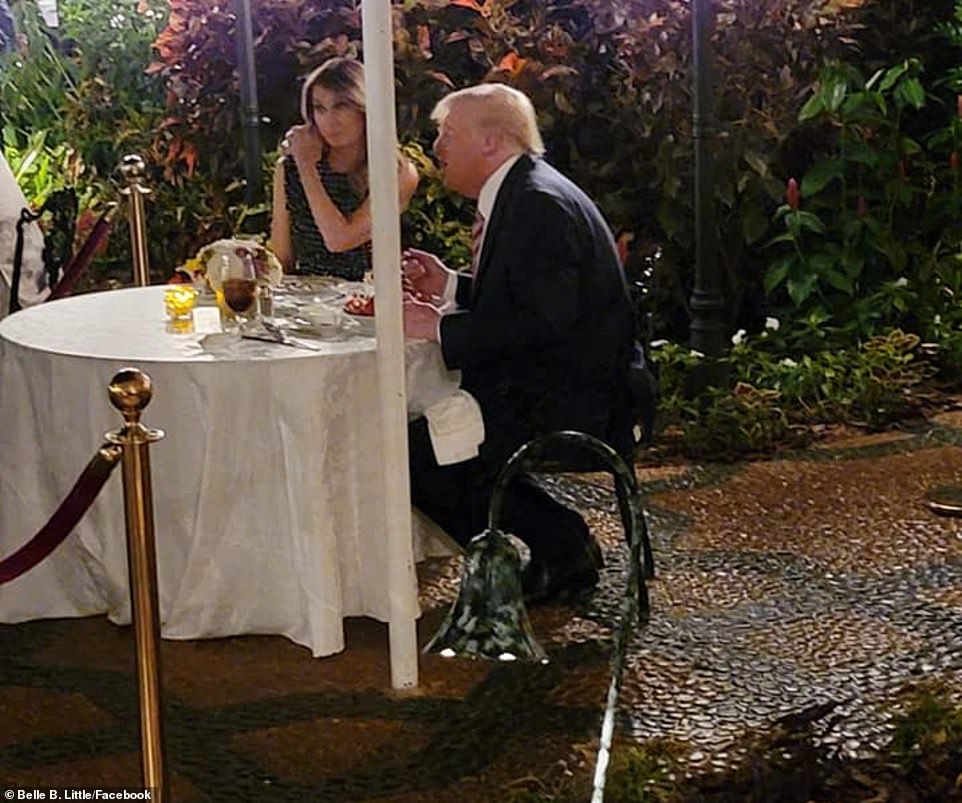 Donald and Melania Trump ‘are treated like zoo animals’ at Mar-a-Lago in Florida, and often eat at a roped off table while their fellow diners stare, a new book claims (pictured, eating alone in April) 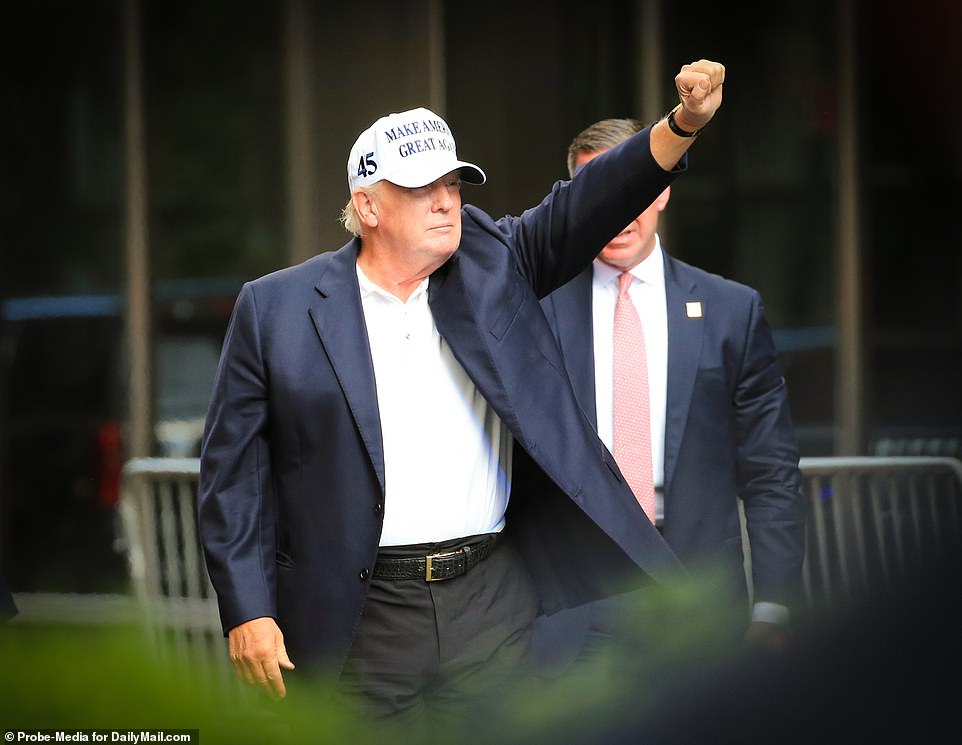 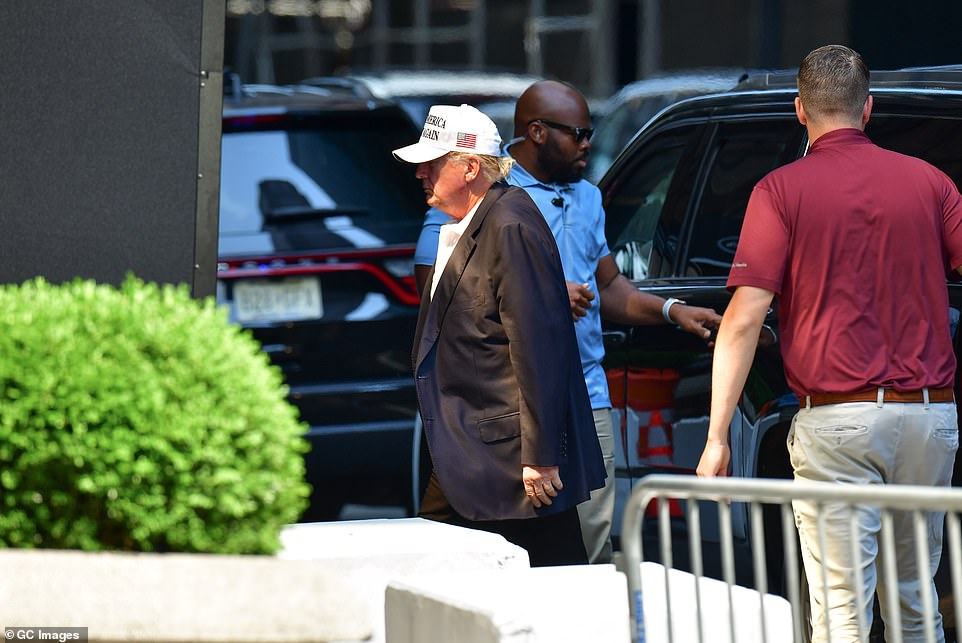 In his upcoming book, author Michael Wolff claims Donald and Melania Trump ‘are treated like zoo animals’ at the Florida resort and often eat alone at a roped off table.

According to Landslide: The Final Days of the Trump Presidency – published on July 13 – the former first couple eat alone while 50 or 60 tables of diners gawp and stare at the patio restaurant.

Wolff also claims it is unclear how often Melania actually stays at the resort, or whether she is living with her husband.

‘Maybe Melania lives here’, he writes. ‘For four years in the White House, it was never quite clear how much time she was spending at the White House or in a house in Maryland where she had settled her parents.’

Melania famously did not move into the White House immediately in January 2017, choosing instead to stay with son Baron in New York until the end of his school year.

She eventually made the move over to Washington full time and remained there until the end of Trump’s presidency. 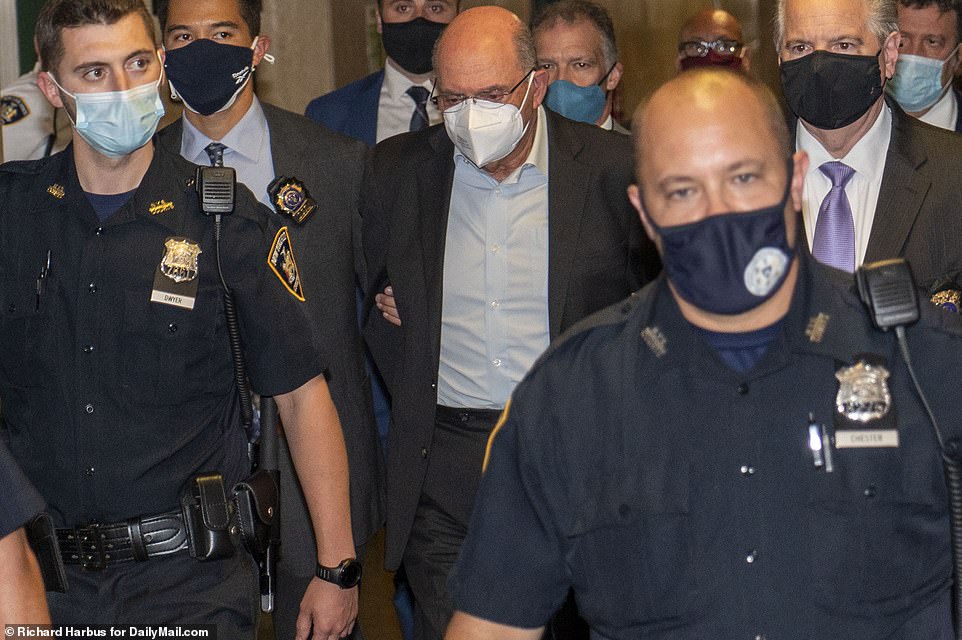 Weisselberg was indicted last week on ‘sweeping and audacious’ tax and fraud charges, after prosecutors accused him of taking a total of $1.7 million in perks and compensation that the longtime CFO and the Trump Organization did not declare in tax filings.

The investigation has cost millions of dollars but could yield just tens of thousands of dollars in back tax.

He was paraded in court wearing handcuffs on Thursday before pleading not guilty during a hearing at New York Supreme Court.

The Trump Organization was also charged in a 15-count indictment that included charges of conspiracy, grand larceny, tax fraud and falsifying business accounts. The maximum prison sentence is 15 years, but Weisselberg would likely get less, if any time at all.

Trump slammed the indictment last Thursday claiming New York had ‘taken over’ the ‘witch hunt’ against him and called the charges against Weisselberg a ‘disgrace’ motivated by politics.

‘The political Witch Hunt by the Radical Left Democrats, with New York now taking over the assignment, continues. It is dividing our Country like never before!’ he said in a statement after Weisselberg pleaded not guilty to charges that he failed to pay taxes for years on a company car, apartment and school fees for his grandchildren.

Trump also spoke with ABC News’ John Santucci in a phone interview and called Weisselberg a ‘tremendous person.’ He repeatedly said it was a ‘shame’ and that he ‘couldn’t believe it’.

He also said New York prosecutors want Weisselberg to ‘lie against Trump’ and flip on the former president.

Weisselberg was seen back at work Monday after the Fourth of July weekend – just days after being brought to a Manhattan courtroom in handcuffs following his indictment.

He was captured in images first revealed by DailyMail.com the day before the indictment came down – with the before and after images buttressing claims he will not ‘flip’ on the Trump and the company he has led for decades.