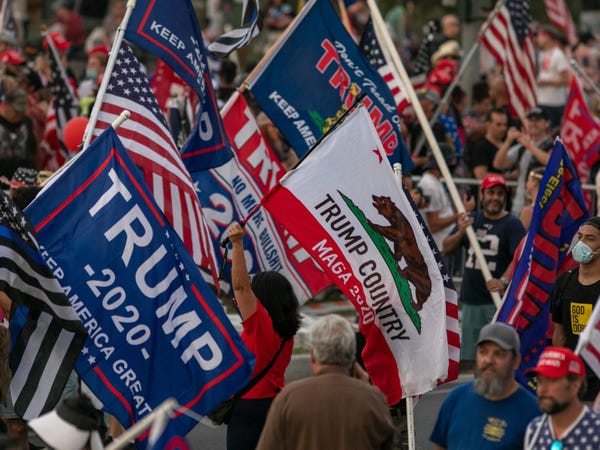 Supporters of the "USA Freedom Rally" took to the streets of Beverly Hills in support of "#Trump2020, the police, and opening our cities, businesses and schools," according to a Facebook post.

A spokesperson for Beverly Hills police told Insider in an emailed statement that when counter-protesters marched to the USA Freedom Rally, a counter-protester and pro-Trump protester clashed, which led local authorities to declare an unlawful assembly at around 2:40 p.m. local time Saturday afternoon.

Police told Insider that no arrests were made from the fight or the protest.

Hundreds of pro-Trump protesters were present at the rally, according to the LA Times. One man who was selling pro-Trump merchandise told the LA Times he made around $2,000 in a matter of hours.

Drawing near the election, communities are preparing for potential violence related to the election. Business Insider's Thomas Pallini previously reported shops are putting up window glass and preparing other gear for potential unrest. In October, Michigan banned the open carry of guns on Election Day. Social media platforms are also preparing to mitigate conflict: Facebook is reportedly preparing measures such as slowing the spread of viral content on its platform to prepare for potential election-related unrest.