BLACK Lives Matter protesters blocked hundreds of shoppers inside a supermarket and jammed up roads for several hours during a demonstration marking the anniversary of Daniel Prude's death.

The demonstration unfolded in Rochester, New York, on Tuesday afternoon as hundreds of BLM supporters rushed at a Wegmans store on East Avenue. 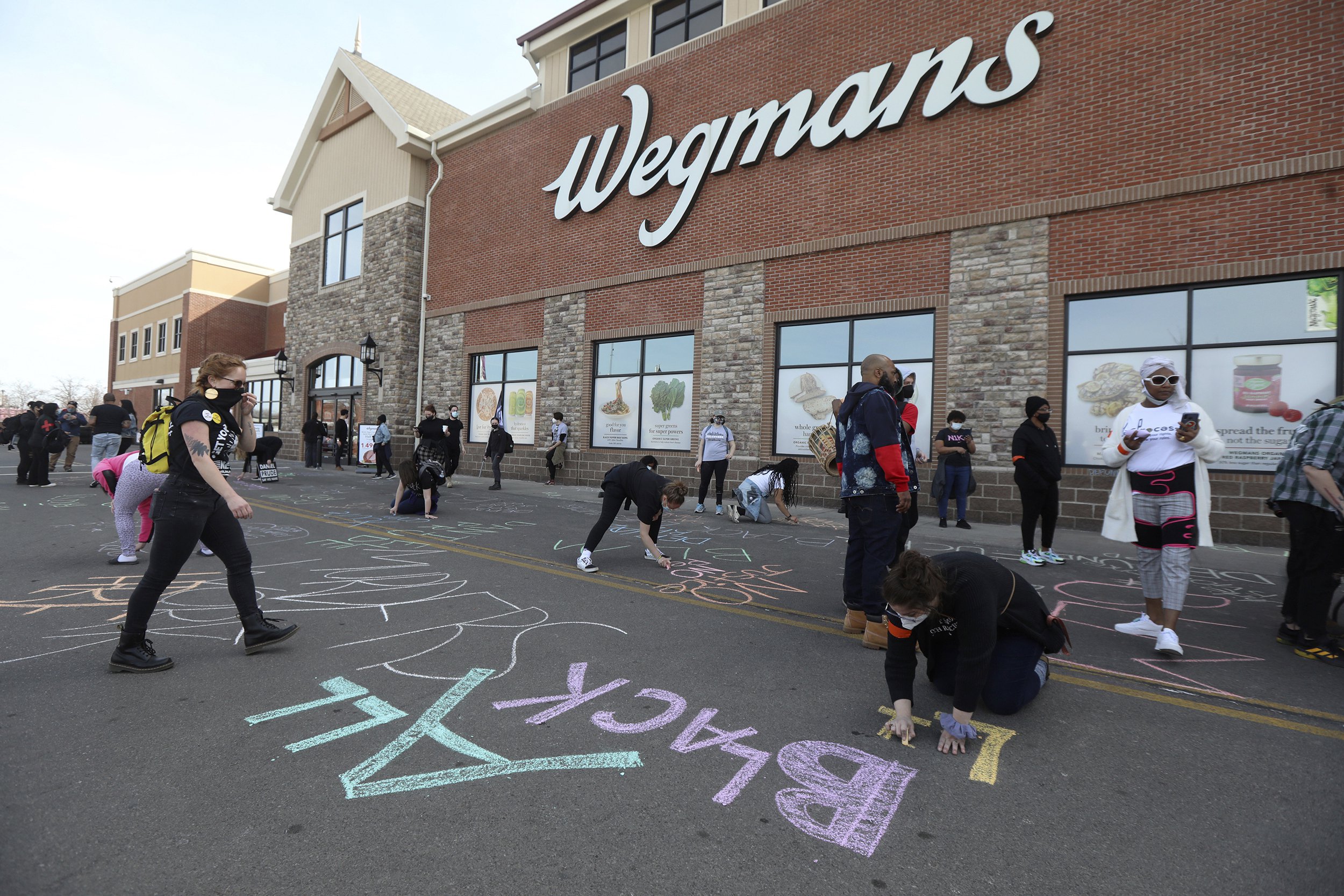 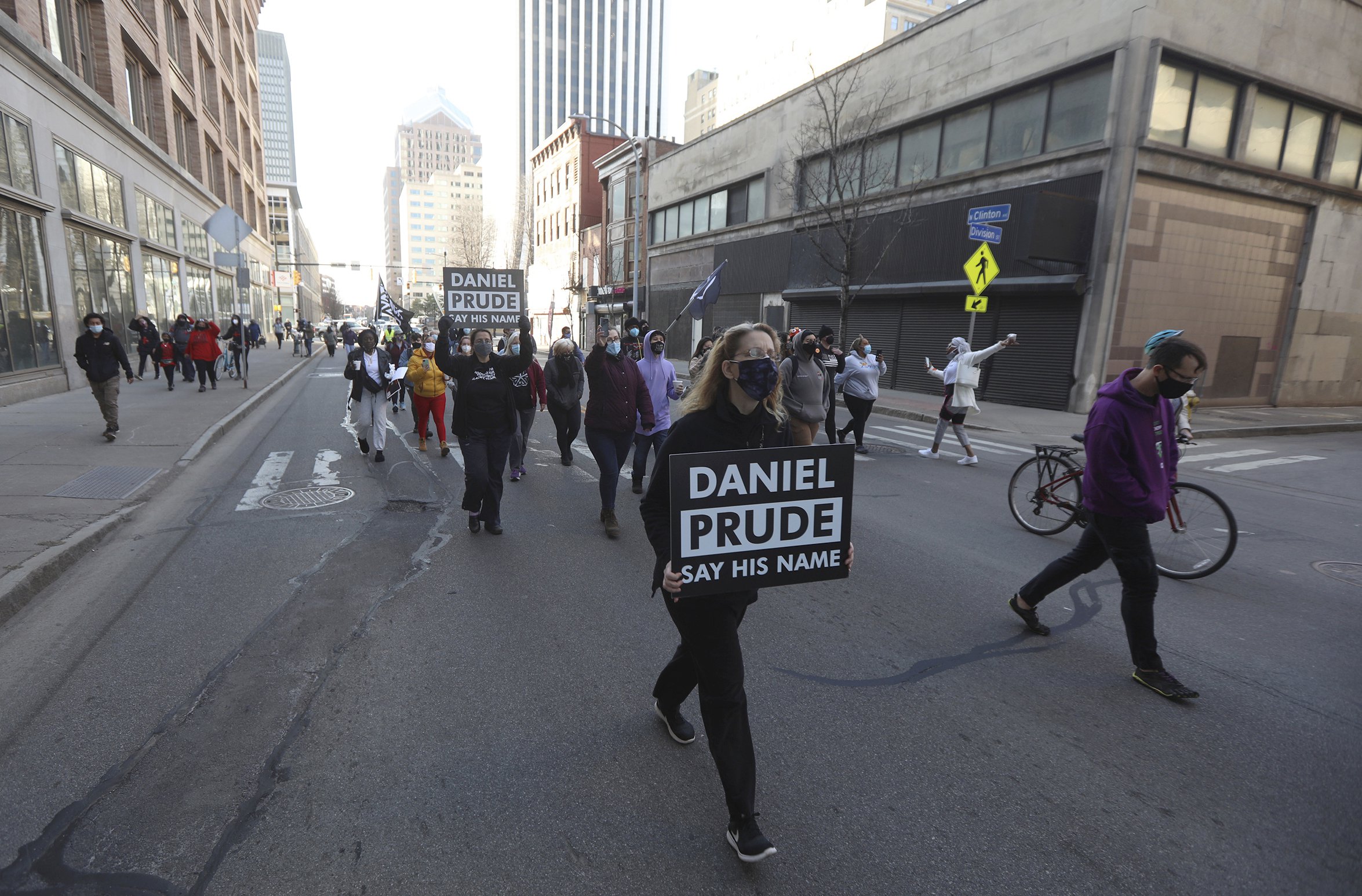 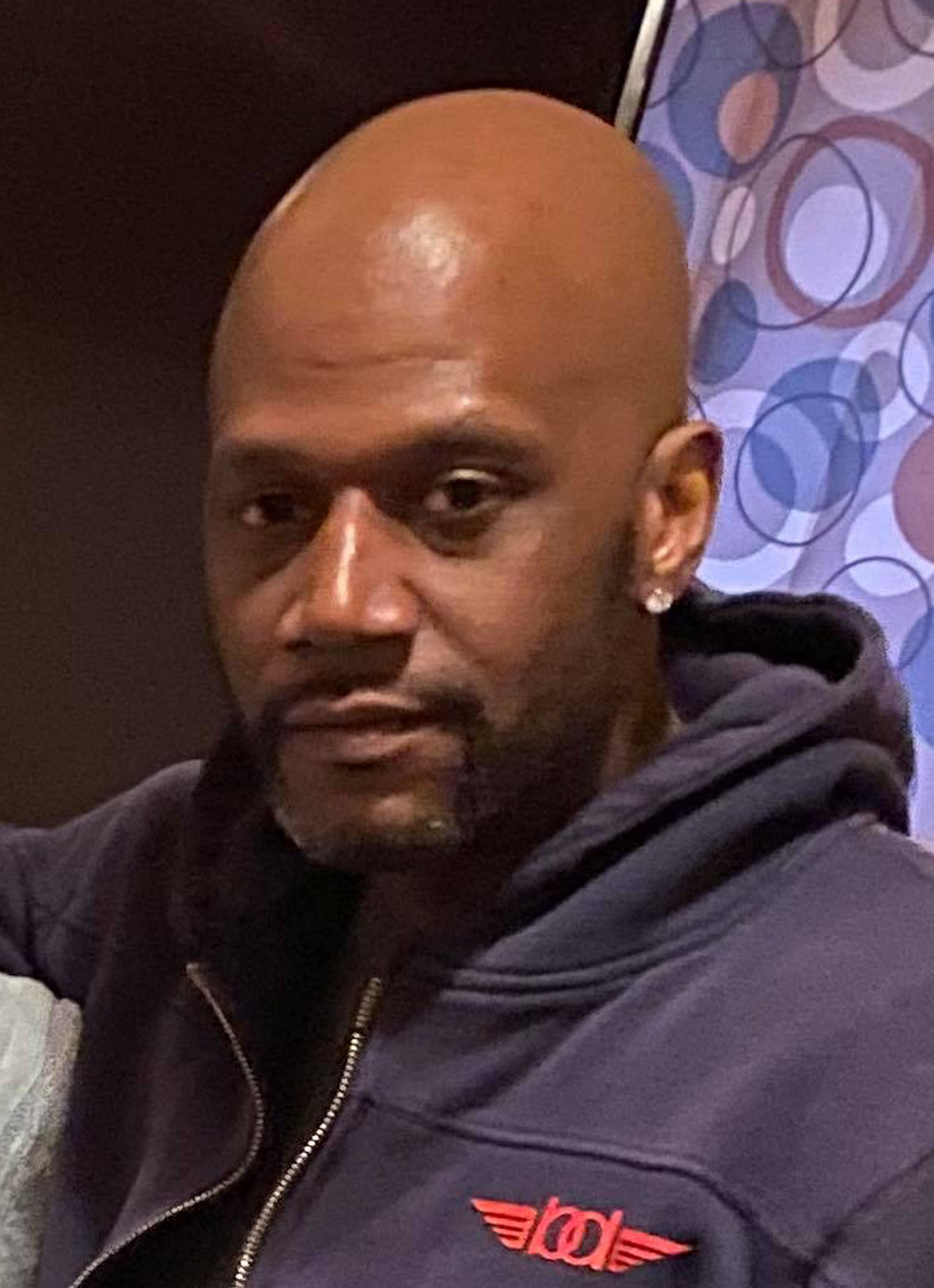 The protesters blocked entrances to the store's parking lot, and began writing Prude's name and messages of support for the BLM movement in chalk on the ground outside.

Staff at the Wegmans locked the store's front doors to prevent any of the protesters entering, trapping around 100 customers inside.

The incident came as part of a wider demonstration staged for several hours across Rochester, marking the one-year anniversary of Daniel Prude's death.

On March 23, 2020, Prude, 41, was left brain dead and later died after police were called by his family to assist with a mental health episode, exacerbated by the drug PCP.

Prude had walked out from his brother's house at around 3am in frigid temperatures, wearing only his underwear, a vest and socks.

By the time police located Prude, he was completely naked and had smashed several car windows in the surrounding streets.

Prude was swiftly placed in a restraint hold by three officers, with a spit hood placed over his head. Within minutes he became unresponsive and never regained consciousness. 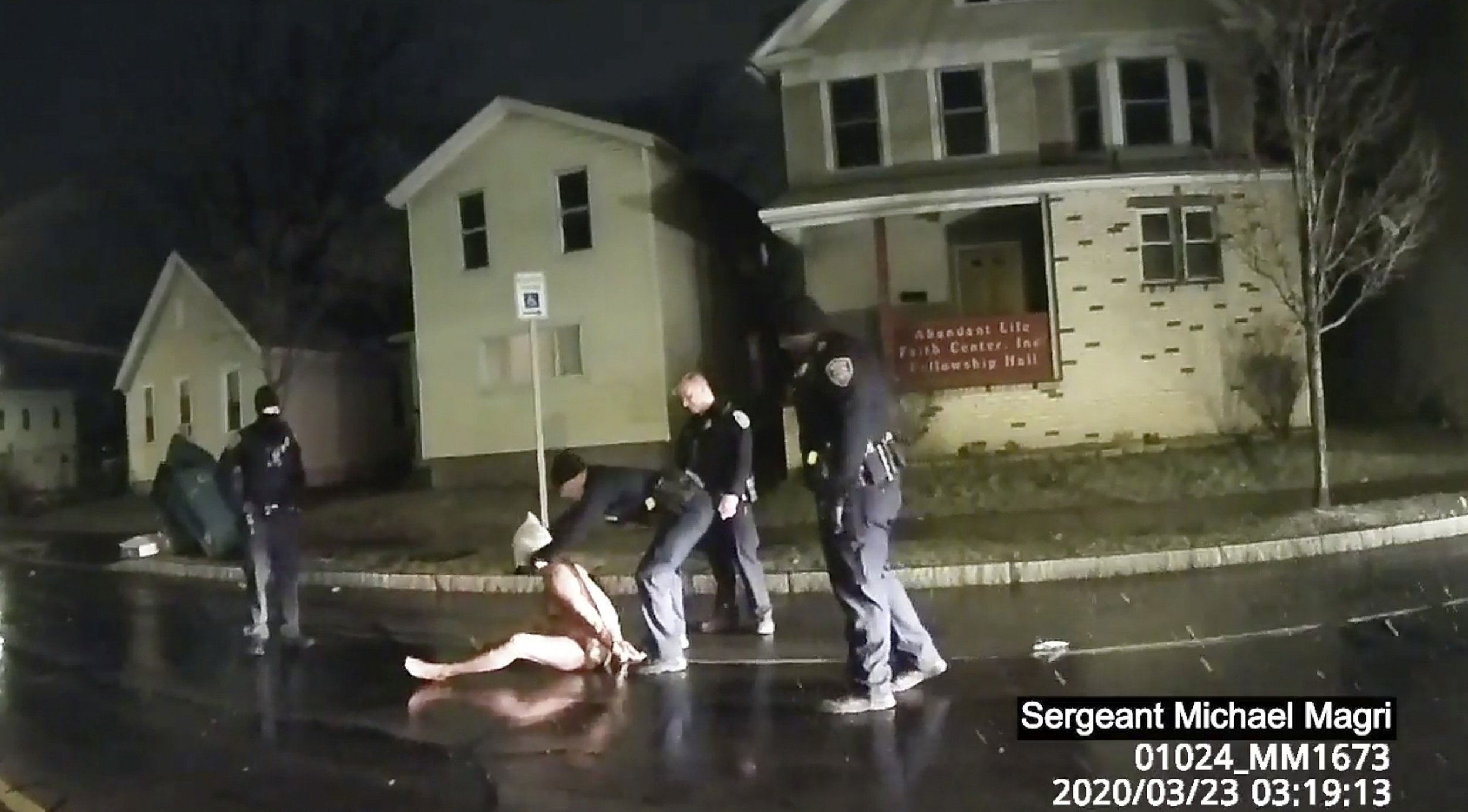 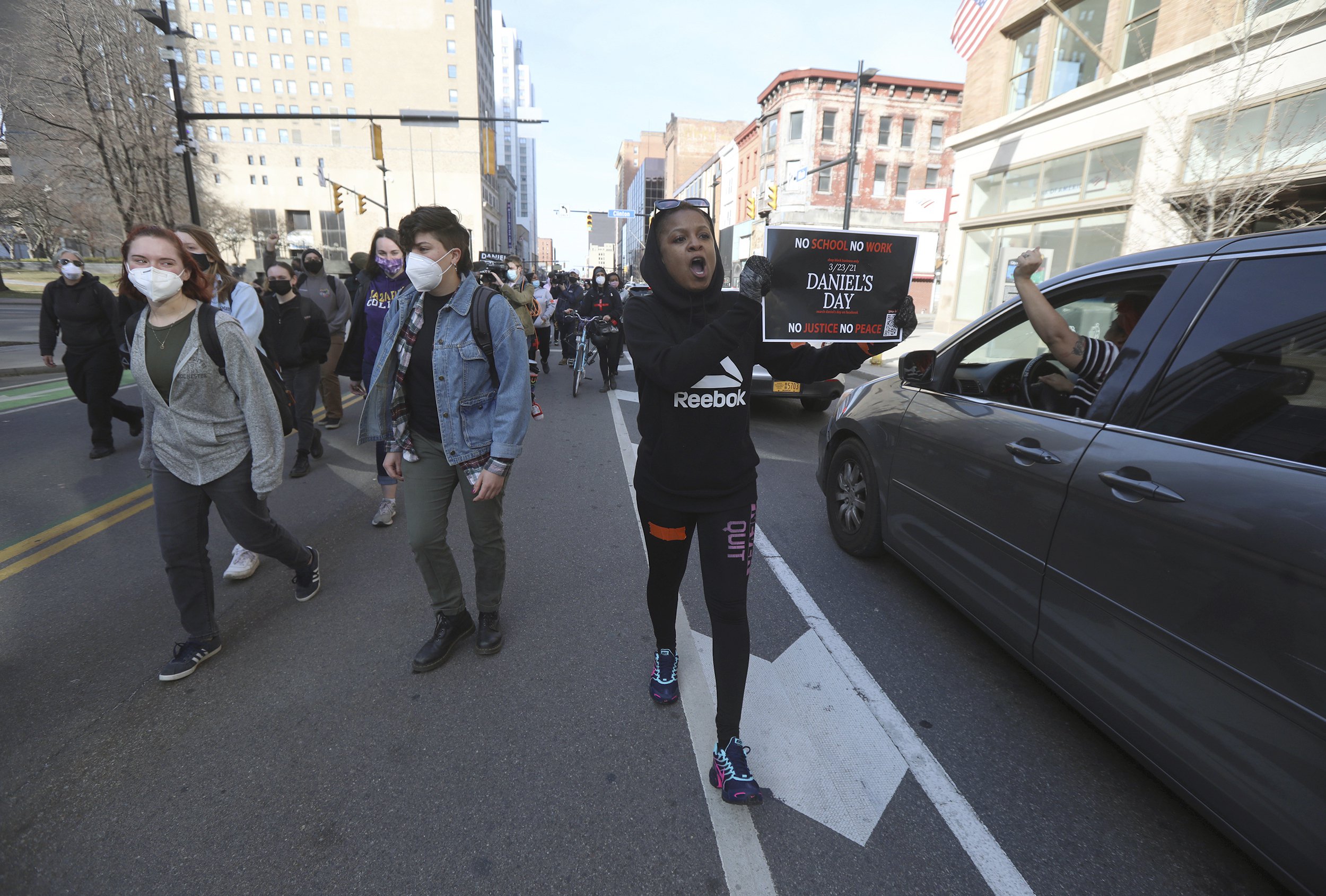 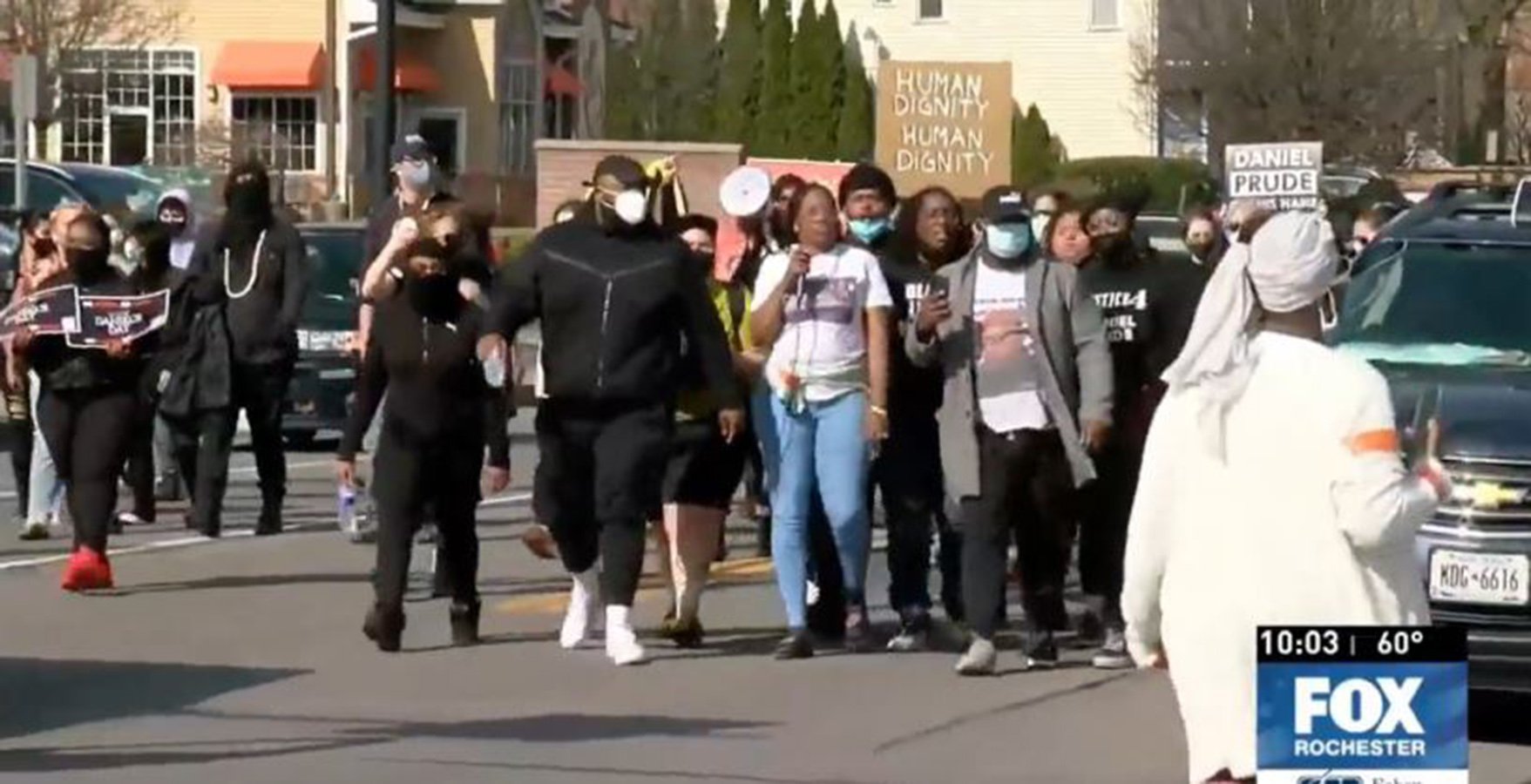 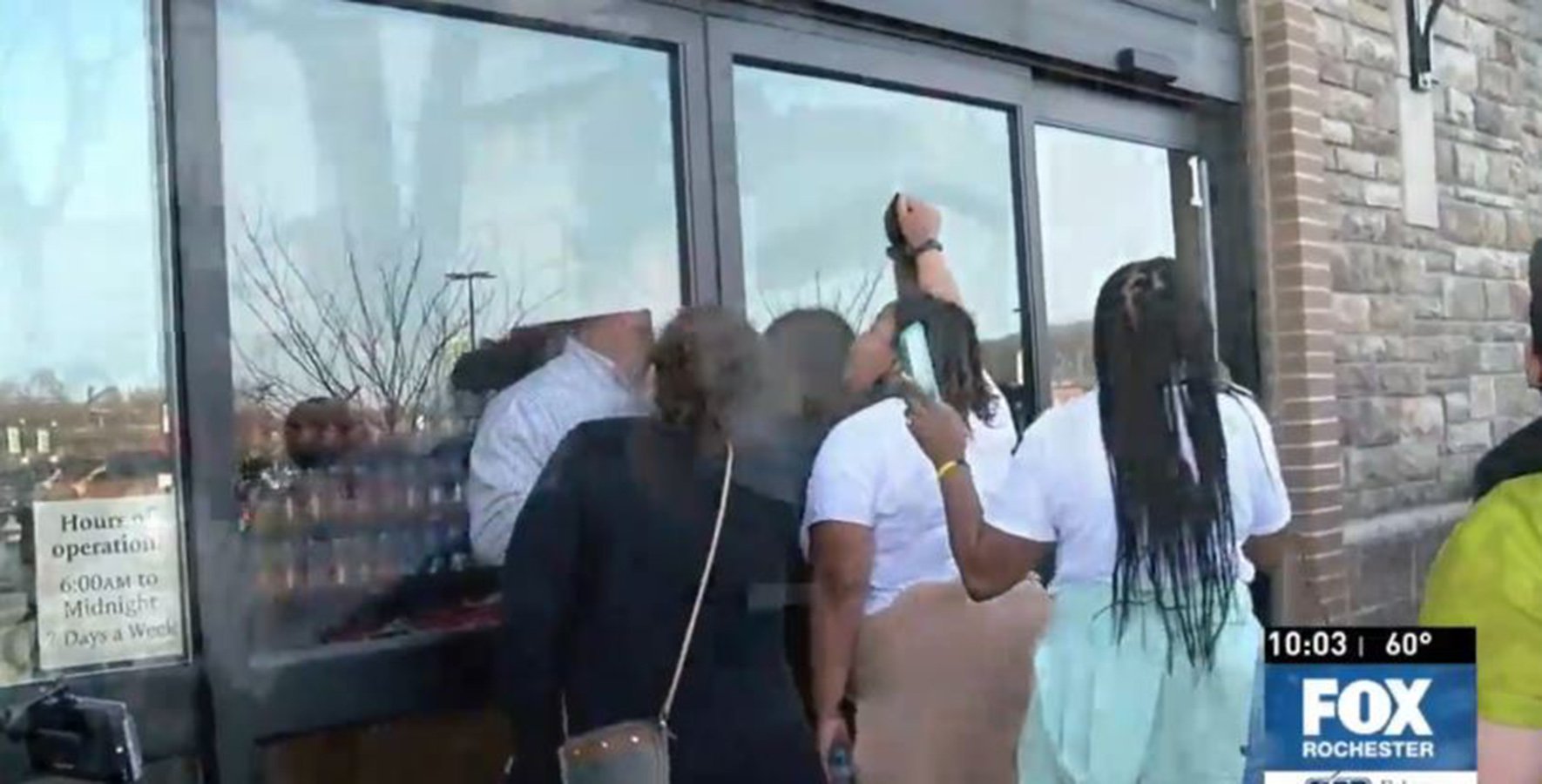 One year on, activists designated Tuesday as "Daniel's Day" and urged others in Rochester to call out of work and school to demand justice for Prude.

"We join the Prude family in calling for a day of action and remembrance on the one year anniversary of Daniel Prude’s murder by the RPD.

"Call out of work, walk out of class, and join us in the streets to demand justice for Daniel Prude!” a Facebook post from the organizers, Free the People ROC, read.

The rally began around 8.00am at Parcel 5 in downtown Rochester.

From there, demonstrators marched through the streets chanting, "no justice, no peace", stopping at a bus station and blocking the terminal, offering to give free rides to all who needed a commute.

Across a period of several hours, the crowd blocked traffic at an intersection of Culver Road and East Avenue, and also at East Avenue and Alexander Street.

Marching further east, the group reached the Wegmans store just before 11am and began blocking off the entrance.

It was at this moment staff of the supermarket chain decided to lock all customers inside the store, to prevent the procession of protesters from storming inside. 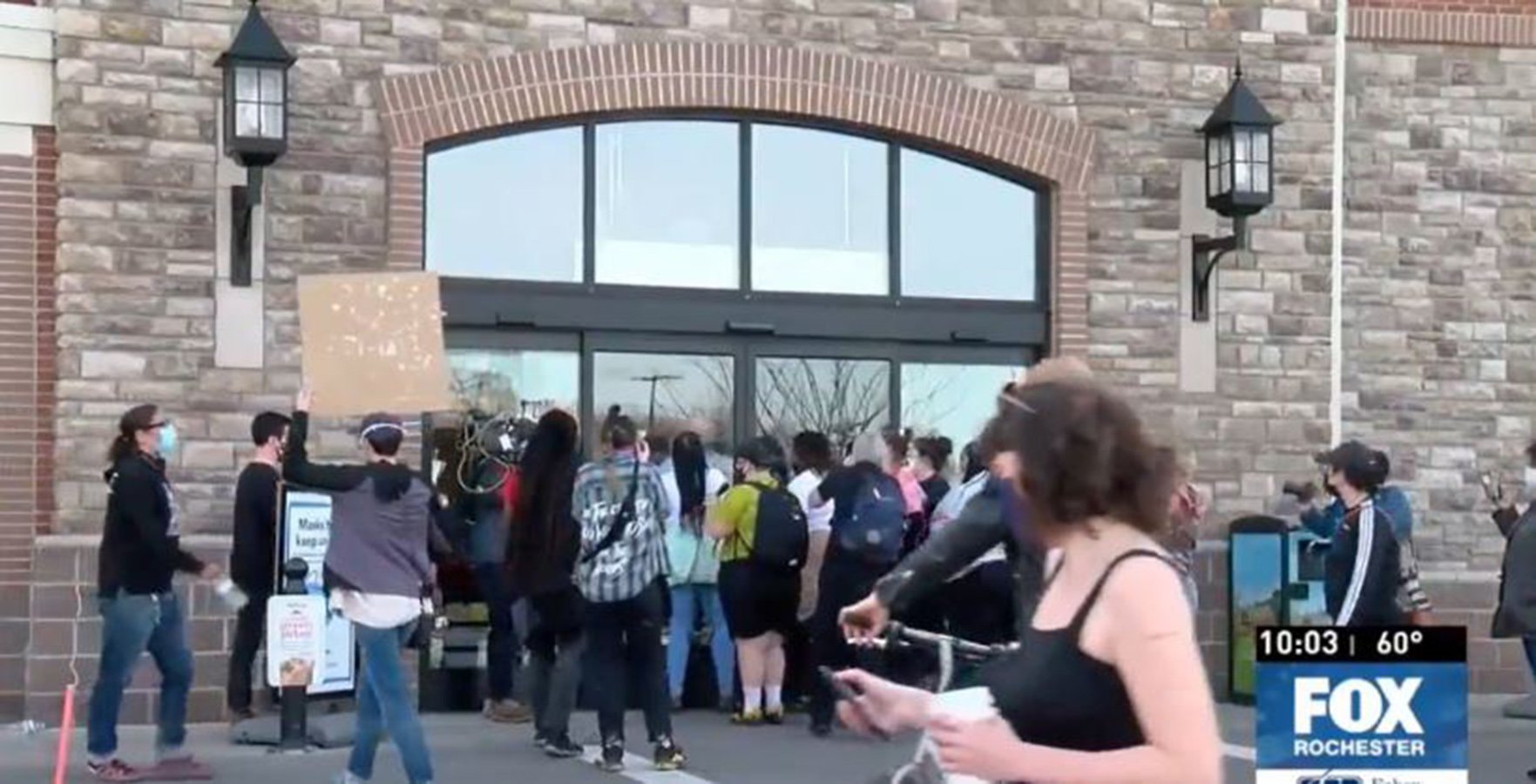 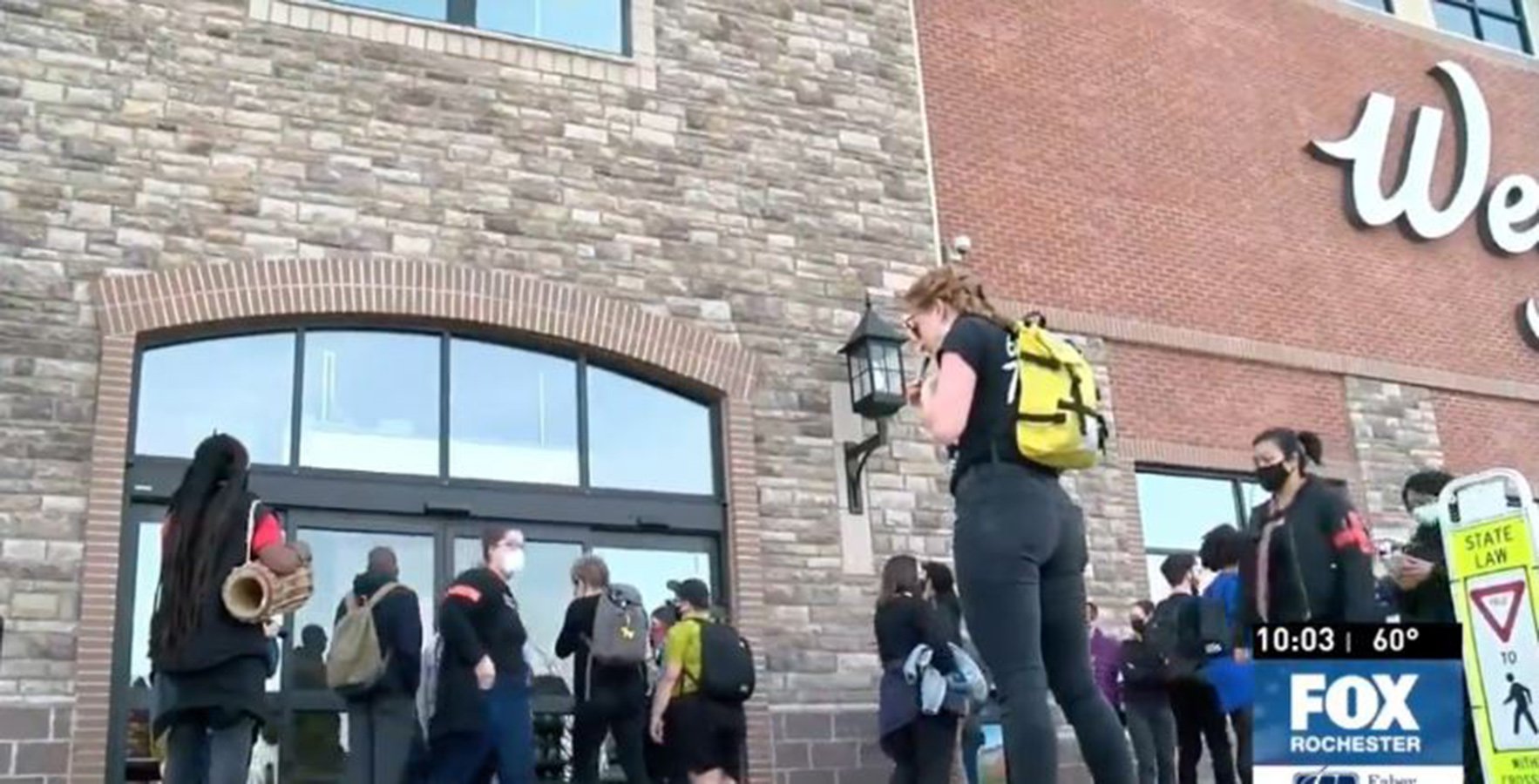 Footage captured by 13 WHAM showed the BLM supporters writing Prude's name outside the store as frustrated shoppers watch on from inside.

One protester told the Rochester Democrat that the Wegmans store was symbolic of a number of problems the city has.

"As we march, rally and protest — you have to be able to stop commerce," City Council candidate Anthony Hall said. "Wegmans is a large business in Monroe County."

Hall continued: "This is the only Wegmans in the city limits, but it's not accessible to the city residents. Hopefully, Danny Wegman talks with the Mayor and City Council because this affected him today. We want people to be inconvenienced because Daniel Prude's family has suffered a great loss."

Similarly, president of the Rochester Chapter of the Arc of Justice, Justin Morris, added: "Wegmans exemplifies what's wrong in our community.

"Wegmans started in the inner-city, in some of our most vulnerable communities, then they got their check and left."

Wegmans kept around 100 shoppers locked inside the store for up to an hour, before releasing them.

Shortly after 12pm, the store released a statement, reading: "Our East Ave. store is currently closed due to protest activity taking place outside of the store.

"At this time, no customers remain in the store, and the doors will remain closed. Our number one priority is the safety of our employees and customers." 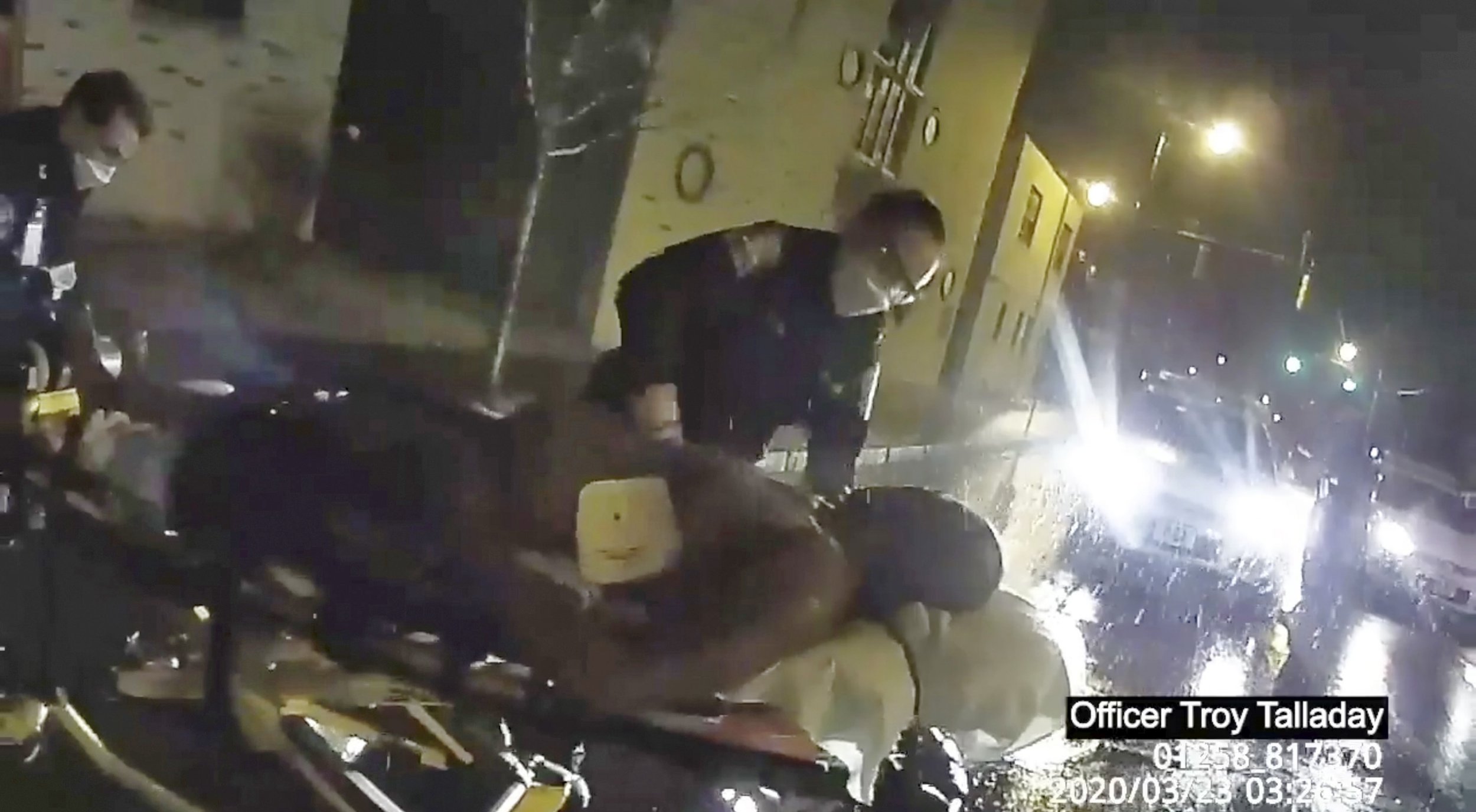 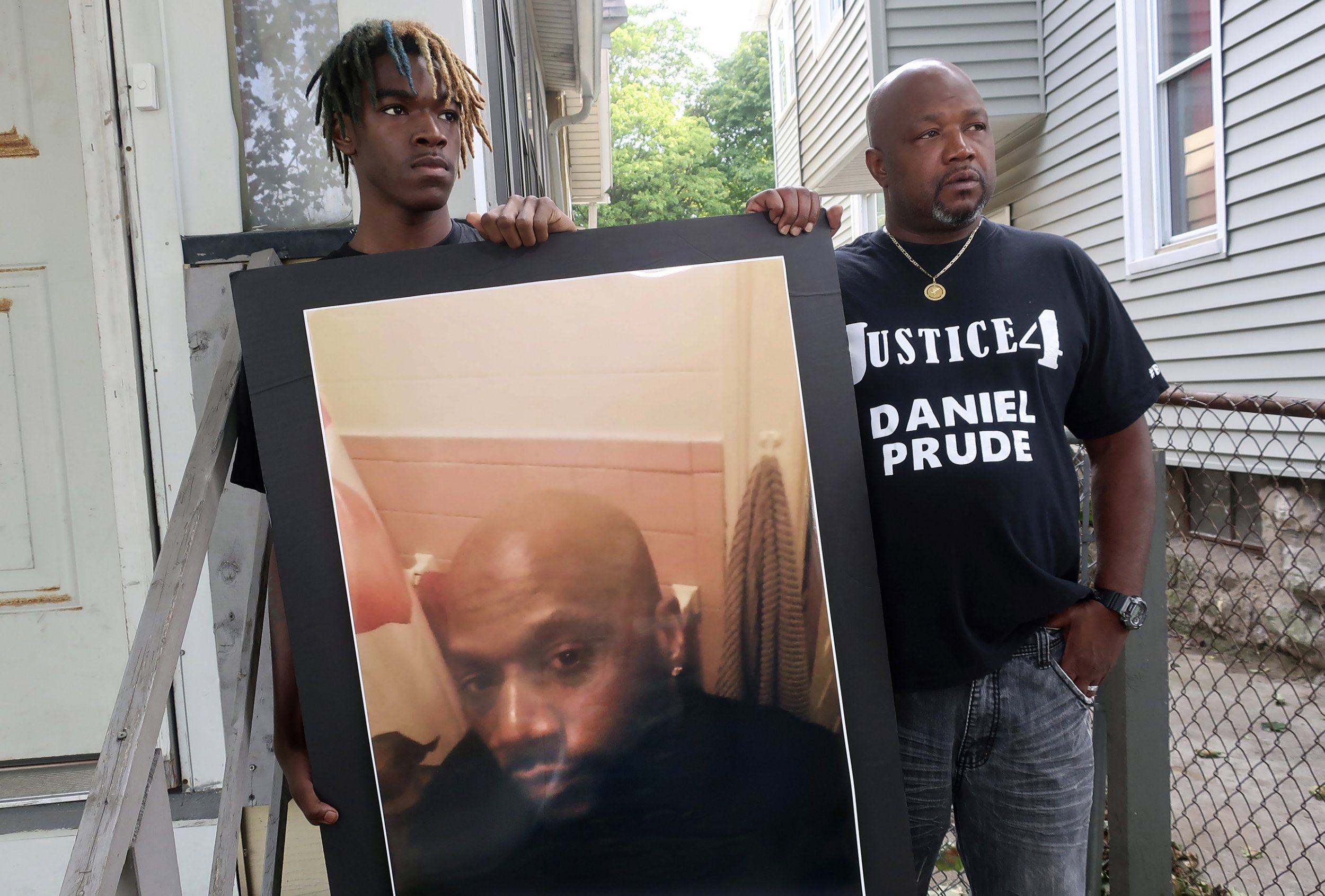 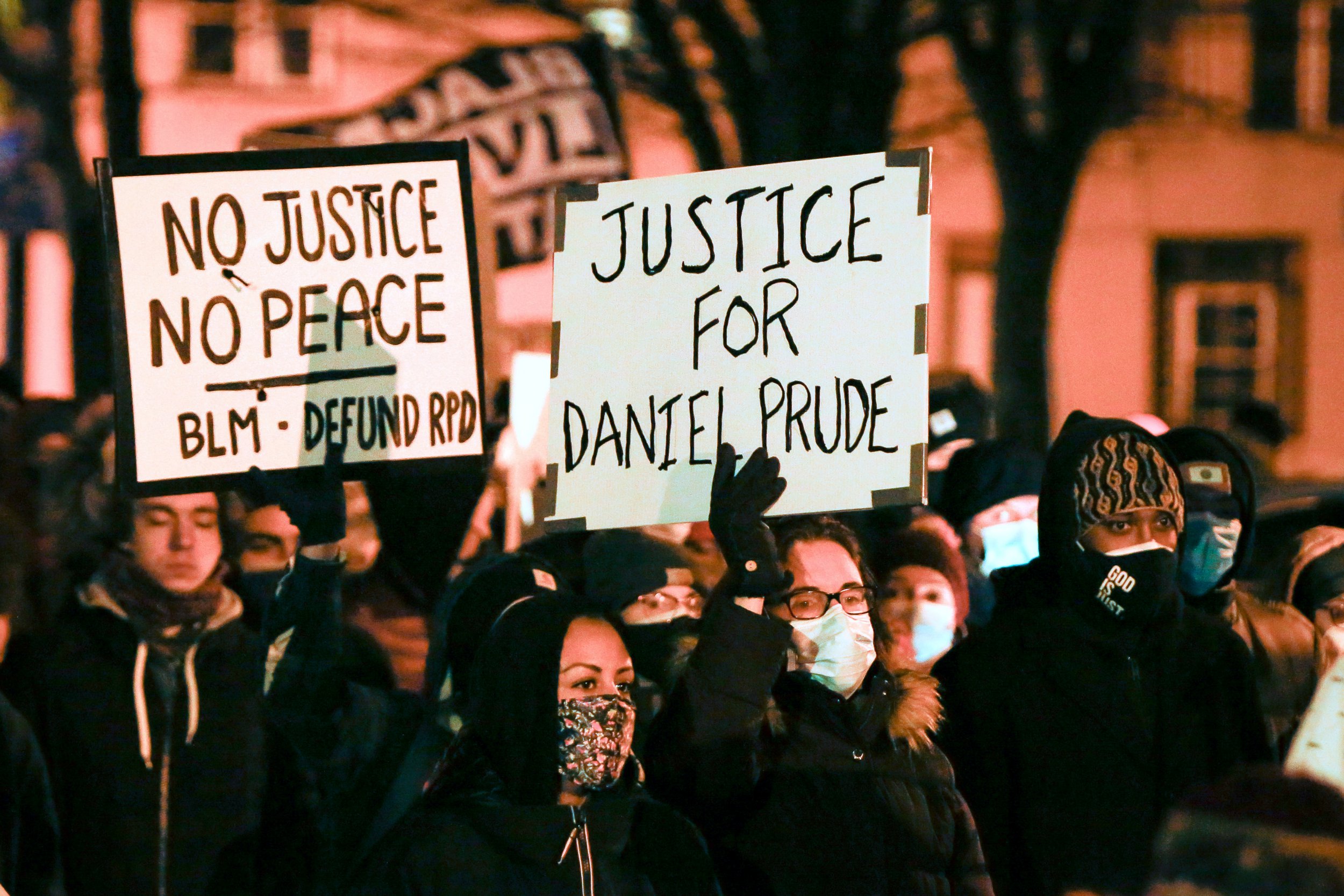 The demonstrators remained outside the store after its closure for several hours, dancing to music and chanting Prude's name. Wegmans remained closed until 6am on Wednesday.

Ashley Gantt, Free the People ROC organizer, told WROC: "We want to make sure that when we’re disrupting traffic, when we’re advocating and raising our voices, we’re not singing to the choir.

"When we do it in our communities were singing to the choir because we are the people being brutalized — our people know — it’s these folks in these communities that don’t know."

By evening, the protesters gathered by a mural proclaiming Prude's name, releasing balloons into the sky.

The group said they were calling for the officers involved in Prude's death to be arrested and charged with murder. 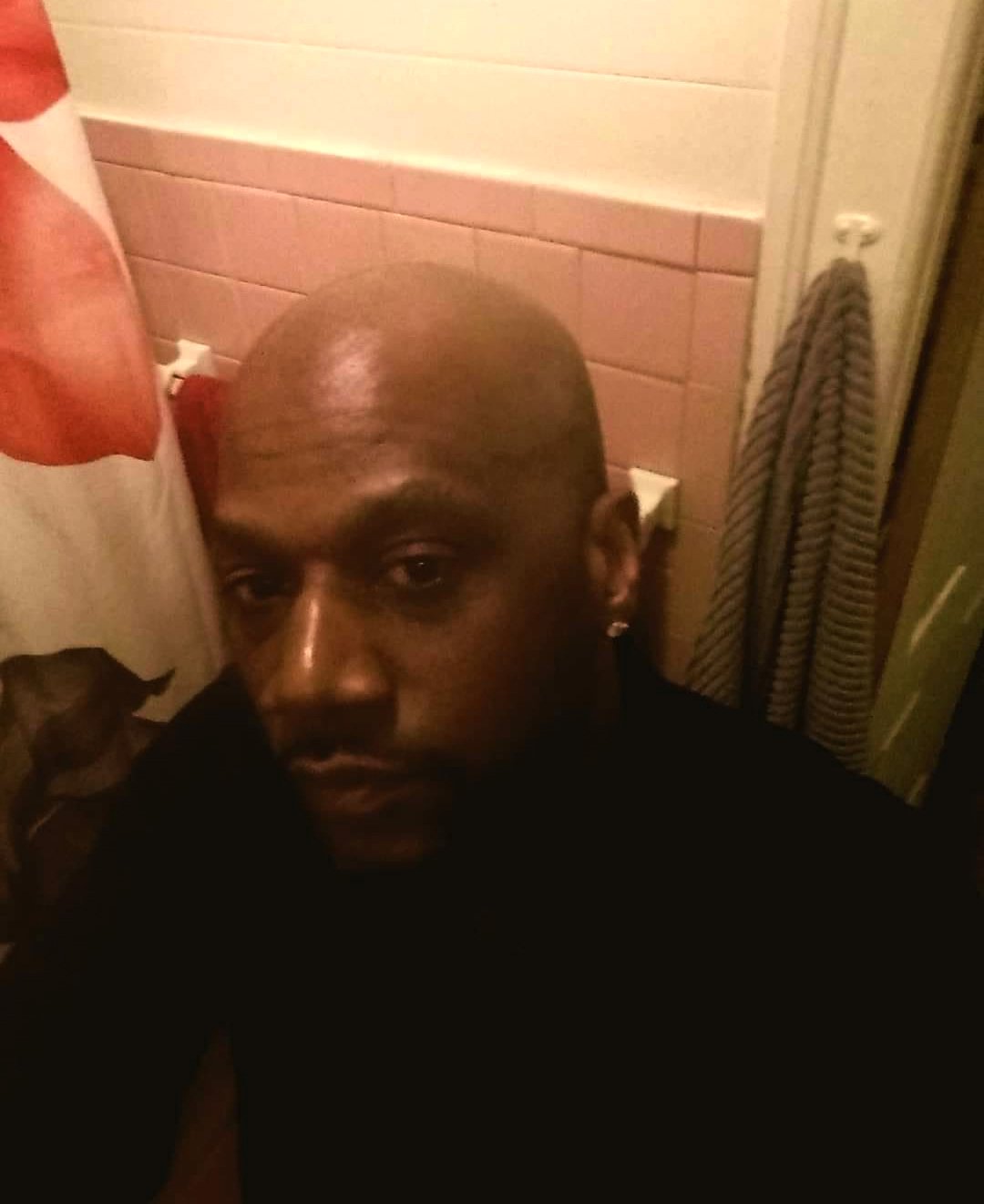 Prude died on March 30, seven days after his arrest. The fatal incident took place less than two months before George Floyd was killed in Minneapolis police custody, igniting racial injustice protests across the US.

Prude's case was not made public until nearly six months after his death, in September, when his family released bodycam footage of his arrest.

In the footage, Prude is seen spitting at officers and yelling that he has COVID-19. They placed a spit hood over his head and laughed at him as he screamed profanities, while lying on the floor handcuffed.

After the hood was placed on his head, Prude became more agitated, flipping onto his side and yelling, "give me the gun!"

Three Rochester PD officers then pushed him onto the cold ground, holding him down for three minutes while he screamed.

Eventually Prude goes completely quiet. The officers became concerned when they noticed fluid seeping out of his mouth.

By that point, Prude had lost consciousness. He was declared brain dead in hospital and died seven days later.

Within weeks of the footage being released, the Chief of Rochester Police and his entire command staff had either retired, had their ranks reduced, or were fired amid accusations of a cover-up.

Emails would later show commanders of the department had urged the city to hold off disclosing the footage because they feared it would ignite violent protests, in the wake of Floyd's Memorial Day death.

In February, a grand jury declined to bring criminal charges against theofficers involved in Prude's death.

However, earlier this month attorneys for Prude's five children announced a federal lawsuit against the city of Rochester and at least six members of its police force.

The suit is alleging wrongful death and civil rights violations, and is seeking unspecified damages.

"My father had a hard life, but he was a great dad. He always showed me and my brother and sisters how much he loved us,"Prude's oldest son, Nathaniel McFarland, said in a statement.

"Our hearts are broken by his death, but this lawsuit has given us hope for the future."

Manchester bomber 'SMILING and on phone' moments before blast killed 22