‘We need to buy time!’ Boris Johnson faces calls to ‘take the economic hit’ of closing schools and banning sport events NOW to stem coronavirus spread amid backlash over ‘lack of testing’ for flights coming back to the UK from Italy

Boris Johnson is facing fresh calls to step up the UK’s anti-coronavirus measures amid fears delaying tough action will only make the situation worse later on.

The Prime Minister and the government’s chief medical officer signalled last night that measures will be stepped up soon, as the number of cases in the UK rises.

Within days Britons with ‘minor’ cold, flu or fever symptoms are set to be asked to isolate themselves at home, and special advice will be issued to vulnerable elderly people.

However, the government is facing a mounting backlash for holding off moving from the ‘contain’ phase of its response to all-out efforts to delay the spread of the deadly disease.

Meanwhile, there is also rising criticism over the government’s approach to people returning to Britain on flights from Italy which was last night put into a state of full quarantine.

Ministers are being urged to introduce mandatory testing and quarantine for all people returning from coronavirus ‘hot spots’.

Former Tory Cabinet minister Rory Stewart warned this morning that delay risked the action being ‘too late’ as he urged the government to ban large gatherings. 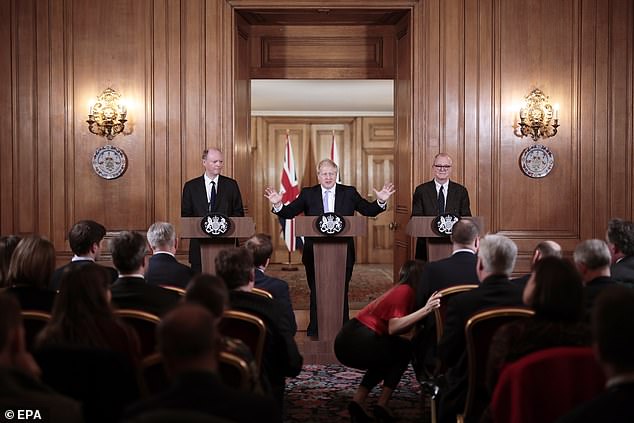 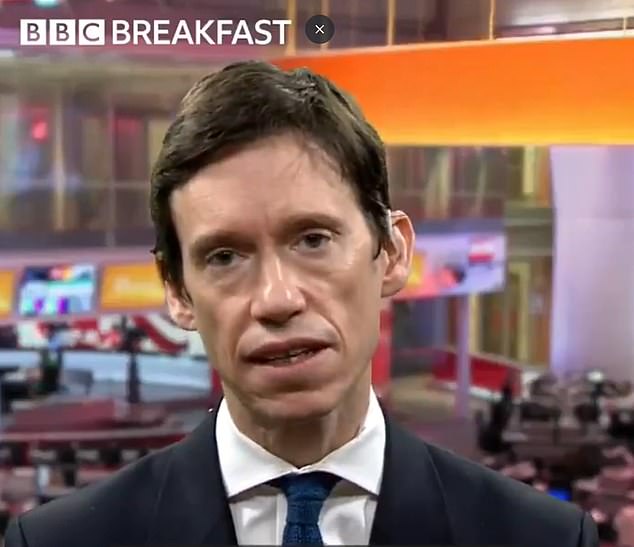 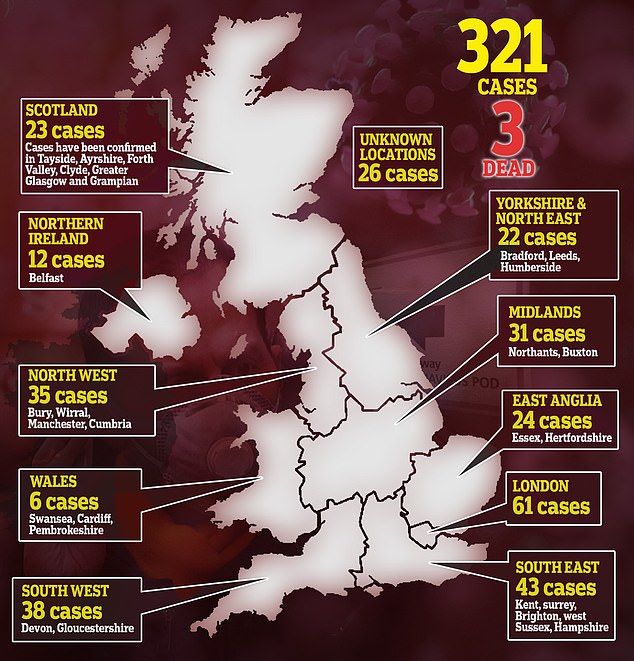 ‘It must be done and that is the lesson we should take from places like China. China has got on top of this much more than many scientists predicted.’

Speaking on BBC Breakfast, he added: ‘If schools close that is a huge impact on people’s live. Nobody should minimise that. That’s of course on the parents, on the education of the children.

‘Closing large gatherings is going to have a large impact on our economy.

‘But my experience on these things is that it is better to make those decisions earlier rather than later, to take the economic hit.

WHICH AREAS OF ENGLAND HAVE THE MOST CORONAVIRUS CASES?

Accurate at 9am on Sunday, 8 March

‘Even to pursue things that the scientists may say are only going to make a small difference is worth doing, if you can buy yourself more time.’

Mr Stewart has also lashed out at the government for failing to take a tougher approach to UK citizens returning from Italy.

He said: ‘All passengers coming from hotspots should be tested and quarantined.

‘There is no justification for half-hearted measures.’

The Government has tightened travel restrictions on coronavirus-stricken Italy following the announcement that quarantine measures will be applied to the whole country.

The Foreign Office is warning against all but essential travel to the country while the number of dead in Italy rose overnight to 463.

It came as British Airways cancelled all its flights to and from Italy while Wizz Air also suspended all flights to the country.

Last night England’s chief medical officer Professor Chris Whitty pointed to tighter measures aimed at protecting the public, particularly the vulnerable and elderly, which could be implemented in the next 10 to 14 days.

As of 9am yesterday, 321 people have tested positive for Covid-19 in the UK, up from 273 at the same point on Sunday, and five people have died in British hospitals.

The latest patient, who died at St Helier Hospital in Carshalton, south London, was in their seventies and was unwell with a number of significant and long-term health conditions.

During a Downing Street press conference yesterday, Mr Johnson said the UK will almost certainly move to the delay phase of tackling coronavirus.

Prof Whitty said the balance would tip so that more and more people would suffer coronavirus rather than regular seasonal flu or other respiratory infections.

He added: ‘We are expecting the numbers to increase initially quite slowly but really quite fast after a while and we have to catch it before the upswing begins.

‘We are now very close to the time, probably within the next 10 to 14 days, when the modelling would imply we should move to a situation where everybody with even minor respiratory tract infections or a fever should be self-isolating for a period of seven days.’

Mr Johnson said that although the UK currently remains in the contain phase of the response, ‘extensive preparations’ are being made for a move to the delay phase – which seeks to put off the peak of the outbreak until summer. 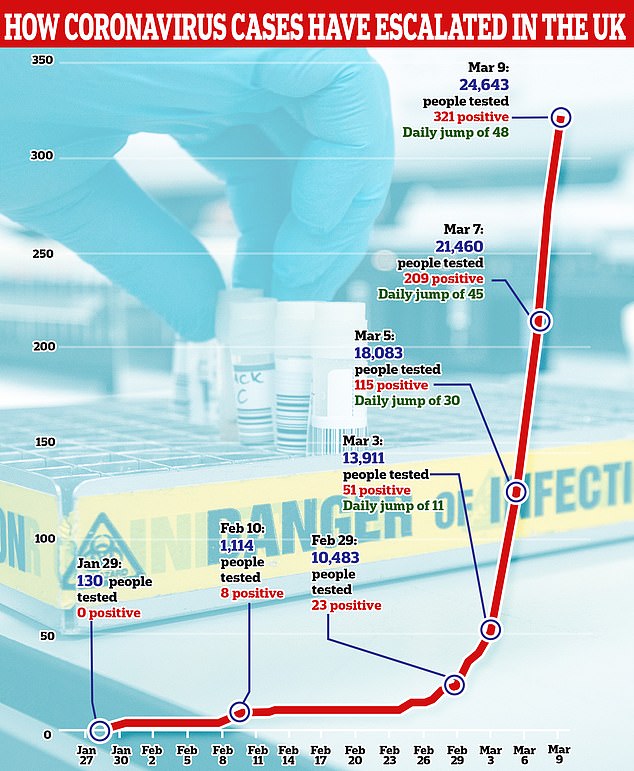 The UK’s coronavirus outbreak began on March 3, when 51 people were confirmed to have tested positive. Since last Tuesday, more than 10,000 people have been tested and another 200 have been diagnosed

Meanwhile, official NHS guidance is to be displayed at the top of internet search results as part of measures to stop the spread of disinformation around the outbreak.

As part of a new range of features for internet platforms, the health service said it had worked with Google, Twitter, Facebook and Instagram on ways to help promote ‘good advice’ when people were searching online for information.

In developments on how the virus is behaving, experts have said people infected with Covid-19 could go five days without showing any symptoms.

Researchers from the Johns Hopkins Bloomberg School of Public Health estimated the average incubation period of the virus to be 5.1 days.

Another study found that being older, showing signs of sepsis and having blood clots were key factors associated with a higher risk of death.

The research, published by The Lancet, examined 191 patients with confirmed Covid-19 at two hospitals in Wuhan – the epicentre of the outbreak.

– The FCO said US authorities are planning a flight on Tuesday to repatriate British nationals on the Grand Princess cruise ship at the Port of Oakland, California

– The Department for Environment, Food and Rural Affairs said the hours which deliveries can be made to supermarkets and other food retailers will be extended to help the industry respond

– Tedros Ghebreyesus, director of the World Health Organisation (WHO), told reporters the global spread of Covid-19 made a pandemic threat ‘very real’

– All St Patrick’s Day parades in the Republic of Ireland are to be cancelled in a bid to stop the spread of Covid-19.