Back to the beach! Britain is set to bask in 77F sunshine today – before heavy downpours sweep the nation tomorrow

Britain is set to enjoy a scorching day of weather today with highs of up to 77F (25C) in some areas – but beachgoers should make the most of it before showers follow tomorrow.

Much of the country should see dry weather all day today with the hottest temperatures expected in the South East, although outbreaks of rain will affect parts of the North this morning.

Families will be able to take advantage of days out with many children still being home schooled officially, while those with youngsters entitled to attend classes have been told they will not be fined if they fail to turn up. 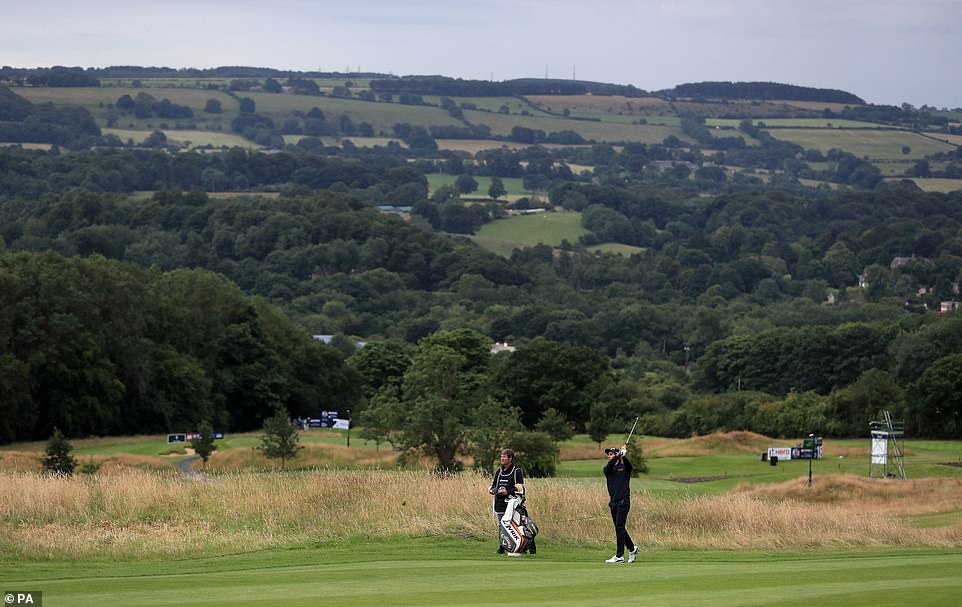 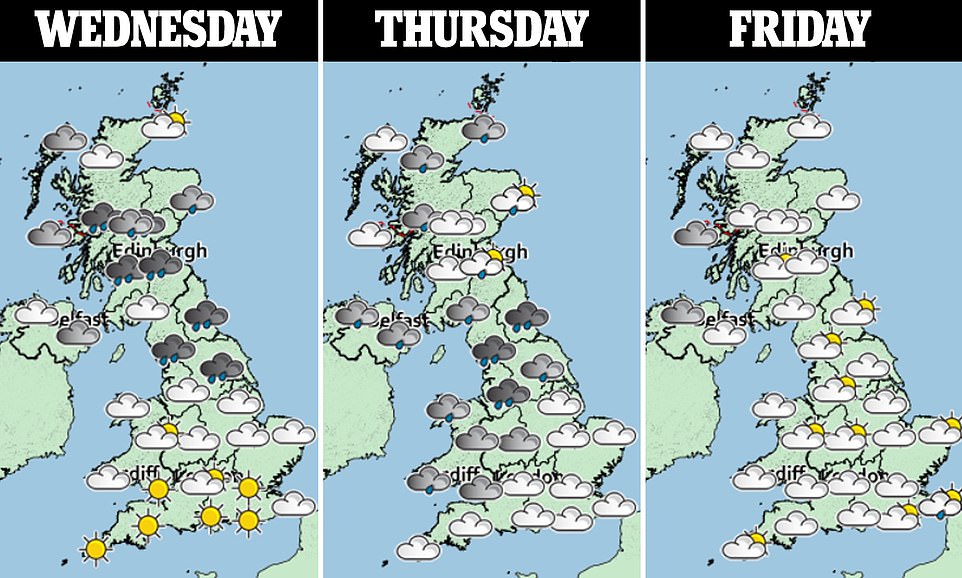 The mercury will drop only to 59F (15C) in some parts overnight, before showers sweep in from the West tomorrow and affect much of the country – although won’t get to the South East until the afternoon. Highs will be 75F (24C).

Met Office meteorologist Aidan McGivern said: ‘Wednesday, there will be a north/south split across the country. For northern England, Scotland and Northern Ireland cloudy skies and some outbreaks of rain.

‘Further south we keep the sunshine and the warmth for one more day before it turns more widely unsettled. Another sunny day to come for the Midlands, East Anglia, southern England and much of Wales – and warmth.’

He said maximum temperatures will be 72F (22C) to 77F (25C), with many areas seeing a degree or so higher compared to yesterday afternoon, when the UK high was 76.5F (24.7C) recorded at Gosport in Hampshire.

Mr McGivern added that it would be a ‘clear end to Wednesday for southern parts of the UK, but we keep the cloud and the outbreaks of rain going further north’. 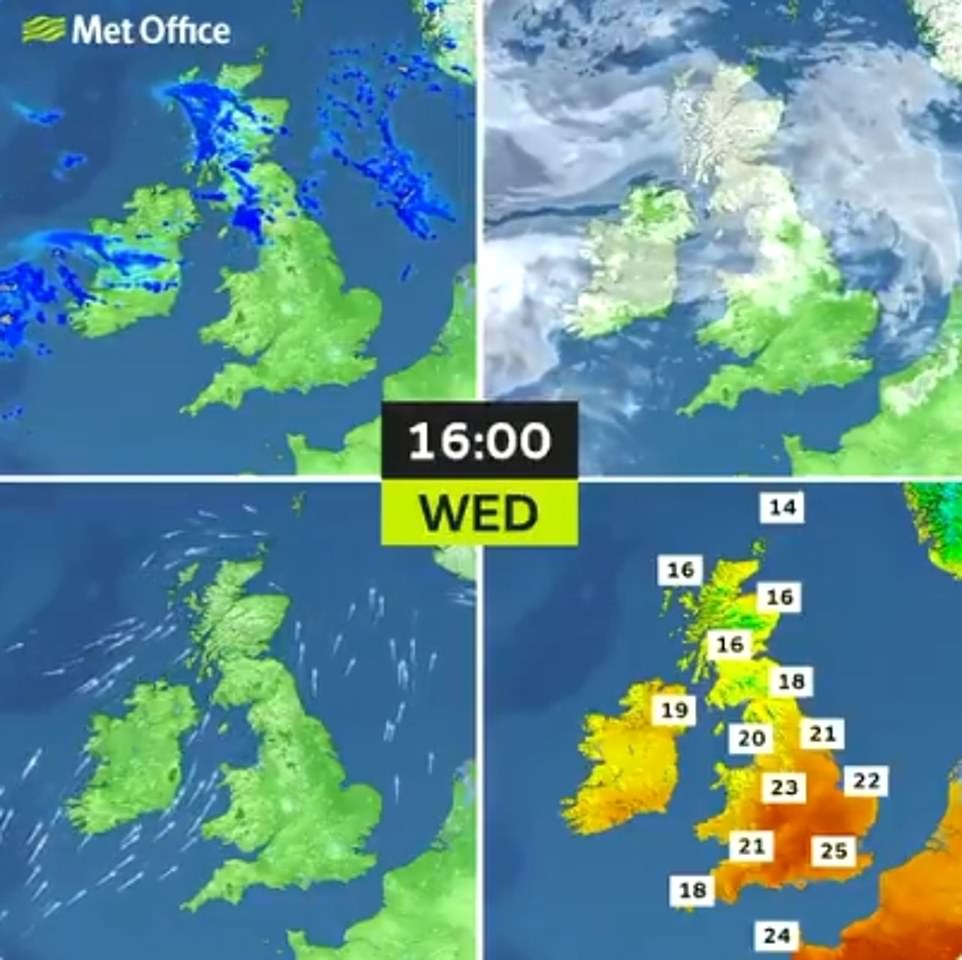 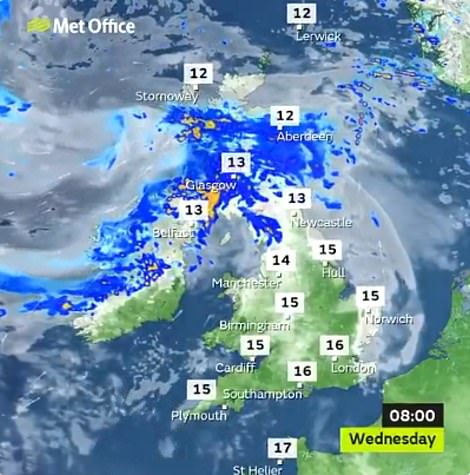 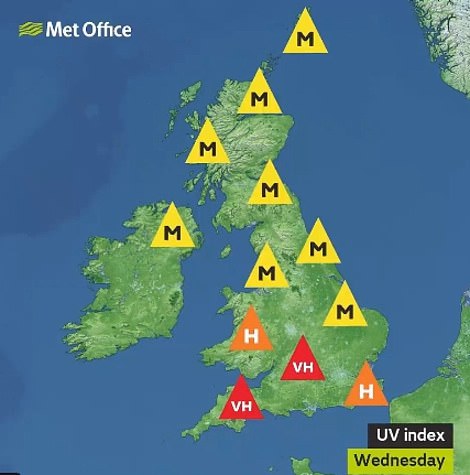 Rain will fall in parts of the North this morning (left), while the UV index will be very high for southern areas of England (right)

By the end of tonight, cloud will build over Wales and the South west with some showers arriving. Temperatures will be a little bit milder overnight to 55F (13C) to 59F (15C) with most places seeing cloud cover increasing.

On Thursday he told of ‘outbreaks of rain moving in from the west, and sweeping through, bringing cloud and wet weather to many parts of the country’.

The rain for southern Scotland will move into northern England and Wales with showers reaching the South West and the Midlands through the day – before showers arrive in the South East by the afternoon.

Friday will be dry and bright for many areas, with isolated showers in south Wales and South West England – and rain affecting the West during the evening.

Saturday will then be unsettled with plenty of cloud and showers spreading eastwards across the country.

How old is Andrew Neil and what’s his net worth? – The Sun