Life in China’s draconian lockdown: Briton films rare COVID-19 documentary showing how ordinary people in Shanghai were forced to stay at home all day every day

A British expat who stayed in China during the coronavirus pandemic has documented how ordinary people coped with the country’s draconian lockdown and high-tech surveillance.

Yu Kung, a former London advertising executive, used his camera to record his neighbours dealing with unprecedented life changes after the killer infection erupted in the Far East.

One of them is a front-line doctor who had to send her family away to prevent them from getting infected. Another family run a wedding dress studio, and they lost all customers overnight.

The 50-minute film zooms in on the emotional, economic and psychological impact the pandemic brought on the faceless millions – something you don’t see on China’s state-controlled news. 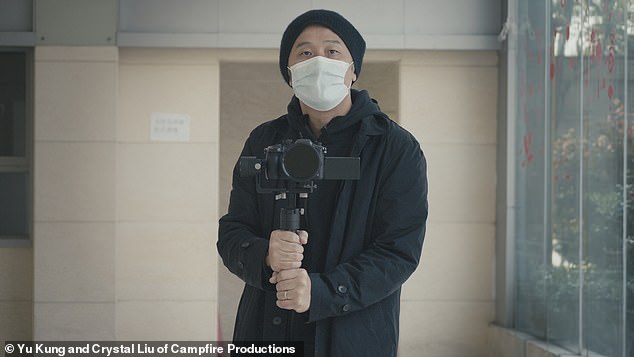 Yu Kung (pictured), who grew up in Horley, Surrey, has offered the Western audience with an intimate insight into the struggle of everyday folks in Shanghai during the coronavirus crisis 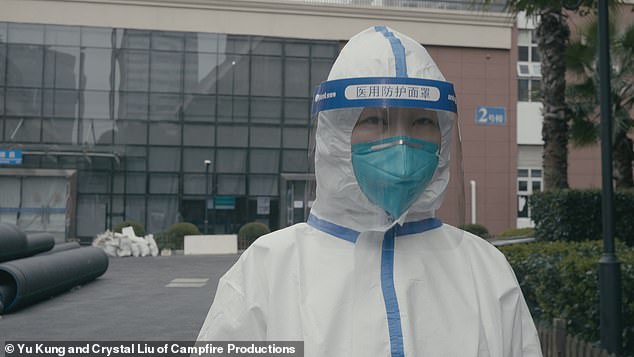 Yan Ye, or Jasmine, wears personal protective equipment while at work in a Shanghai hospital. Jasmine is a front-line medical worker and had to send her husband and young son away from Shanghai to avoid passing the deadly disease to them should she catch it from her patients 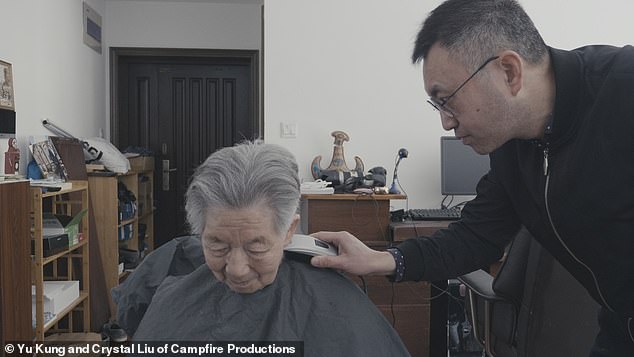 Yu’s neighbour Xiaolin Yu learns to cut hair for his mother Yutang during the crisis. Yu and his family run a wedding dress studio and had no customers for seven weeks due to the lockdown

Yu, 48, was born in Hong Kong but moved with his family to Horley in Surrey when he was five.

He says he was hoping to explore the ‘symptoms’ of the COVID-19 lockdown being felt by everyday folks in Shanghai, where he has lived for the past 10 years.

He and his Chinese wife Crystal Liu, a writer and producer, decided to make a film after the deadly disease had brought the couple’s work to a halt.

‘We put a notice up in the building’s lift asking our neighbours if they would like to get involved with our film project,’ the couple told MailOnline.

And to their surprise, many people replied and were keen to share their stories.

The building’s cleaner sprays bleach at lift buttons to prevent the spread of COVID-19. The husband and wife cleaners, Wenling Cao and Quanli Chen, are migrant workers in Shanghai 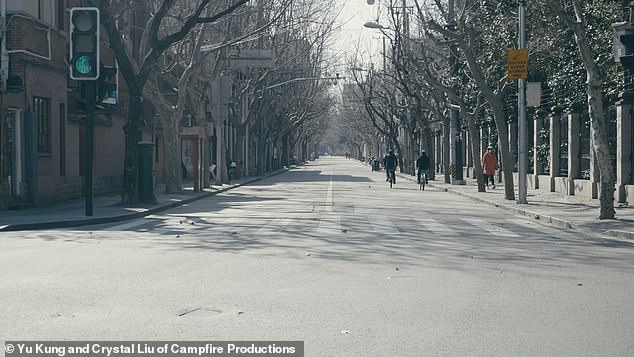 Their film also features a naughty schoolboy who thought the lockdown was the best thing in the world because all he needed to do was to ‘stay at home and sleep’.

The building’s live-in cleaner couple had to work overtime to bleach every corner to stop the spread of the virus.

Also, an American kindergarten teacher whose class got shut down due to flu-like cases was struggling to work from home. At the same time, a lawyer had to become a stay-at-home dad after his civil servant wife had been sent to inspect inbound travellers to prevent ‘imported cases’.

Conducting any independent filming in China is never easy due to the nation’s authoritarian media censorship policy.

‘We had been through nearly three weeks of isolation before we had the idea for the film. Filming only began after we sought permission from the building management and the Residents’ Association representative,’ the duo explained. ‘They were very supportive of the project.’ 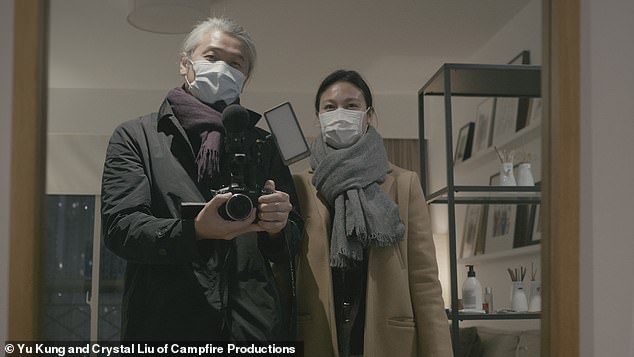 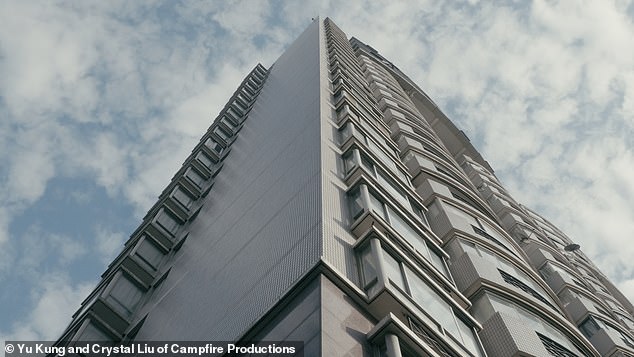 Their tower block in Shanghai has 110 families. ‘All the residents in our building had been in isolation for weeks. The security staff did not allow any visitors into the compound,’ they said

Since the deadly disease of COVID-19 emerged in the central Chinese city of Wuhan in December, it has swept across the world and killed more than 338,000 people globally.

When the epidemic started to accelerate in January, the Chinese government took what was deemed as the unthinkable and drastic steps at the time: to seal off the epicentre Wuhan from the world and order residents in other parts of the country to stay at home.

Although Shanghai is a four-hour train ride from the ground zero of the outbreak, to impose strict quarantine measures had big challenges because of the city’s sheer size.

The sprawling financial hub is nearly four times the size of Greater London, and most of its 24million residents live in densely packed buildings, making absolute seclusion a tough task.

‘Our security guard has become more like a policeman, he is responsible for protecting all residents living in the compound,’ Yu said in his film, called ‘COVID: Our Lockdown in Shanghai’.

‘I remember the first time when they held the temperature gun and pointed it at our heads, we thought “oh my god, this is a bit crazy”.’

With the help of the world’s most advanced surveillance system and the widespread use of facial-recognition technology, officials in China have been able to keep every citizen in check to prevent the transmission of the bug. 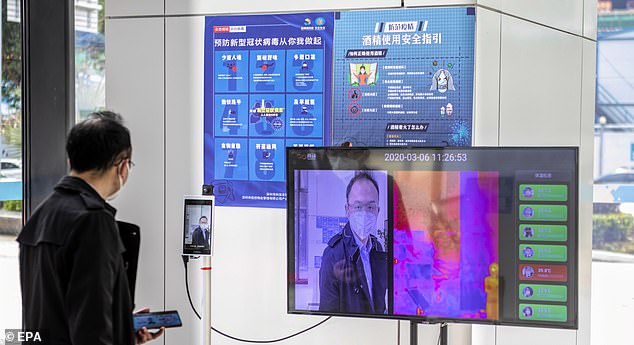 China has resorted to its powerful mass surveillance system and widespread facial-recognition technology to help track virus carries in the outbreak. The file photo shows a man standing at the entrance at an office building in front of an AI computer in Shenzhen on March 6 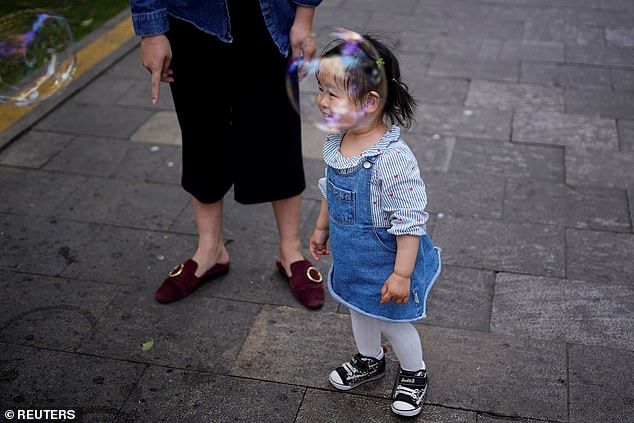 Although Shanghai is a four-hour train ride from Wuhan, to impose strict quarantine measures had big challenges too. The picture shows a little girl playing at a park in Shanghai on May 19

Such level of state control might raise a few eyebrows in the West. But residents of Yu’s building seemed to have no opposition to heightened scrutiny from authorities.

Yu’s wife Crystal calls such monitoring ‘good’ due to its virus-containing nature.

The 34-year-old is seen in the film having to use a government-approved, AI-powered virus app to gain access wherever she goes. But she explained: ‘I think if you understand the initiative, you kind of accept it.’

For Yu, the constant inspections and digital tracing ‘weren’t really much of a choice’.

‘This crisis has brought out new dilemmas, that’s for sure,’ he told MailOnline.

‘In China, almost everyone uses integrated social and payment apps like WeChat that covers much of your daily life, so a lot of your data is already tracked for advertising purposes. I guess, during these times, they’re just re-purposing the existing data.

‘The irony of this situation appears that the detailed approach to tracking and tracing is what has allowed me to move around more freely.’ 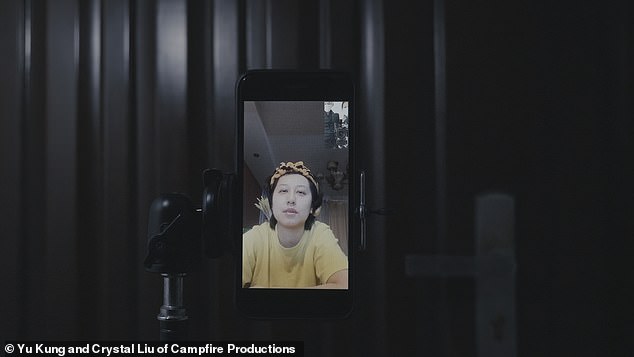 Tian Mi, a video producer, talks to the filmmakers via Facetime while she is under self-quarantine. Yu says shooting the film allows him to get to know his neighbours better 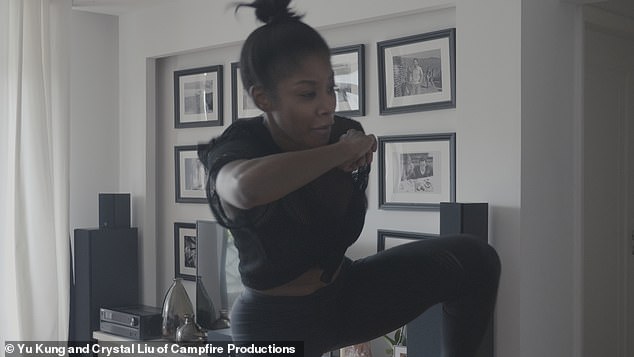 American kindergarten teacher Tiffany White exercises at home while in quarantine. Her class halted due to multiple flu-like cases, and she confessed that she was struggling in isolation

The London-based production team says the film presents ‘intimate, domestic, everyday experience’ in a national emergency, which can now be felt worldwide, and ‘it’s like watching our lives in fast-forward’.

A spokesperson from the studio told MailOnline: ‘One of the most extraordinary aspects of making this film has been documenting something so life-changing unfolding ahead of us on another continent, which we have all been experiencing in their wake.

‘It has been a moving production process for all members of the team. Cutting and crafting scenes portraying the physical reunion of family members in Shanghai whilst we are still separated from our own loved ones has been particularly poignant.’ 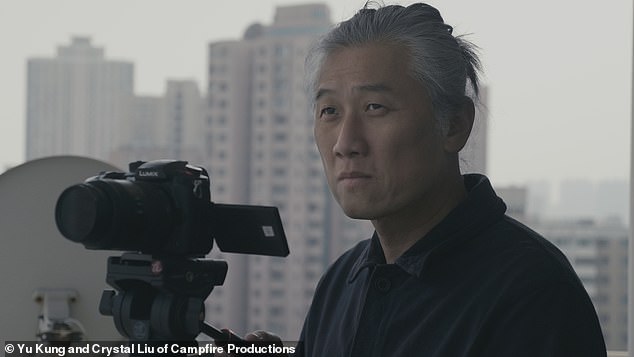 Yu (pictured) and Crystal are aware of the sensitivities while telling a Chinese story to the world. But they say they just want to is telling everyday human stories based on what they see

The pandemic has so far been the most sensitive topic to the Chinese government this year, with reports, social media videos and independent dispatches carefully censored by Beijing.

Fang Fang, a Wuhan writer who wrote about her life in quarantine, even faces death threats after publishing her diary in the West.

Yu and Crystal are aware of the sensitivities while telling a Chinese story to the world.

‘But what we documented was factual and based on our personal experiences as well as that of our neighbours,’ the couple noted.

‘All we are doing is telling everyday human stories based on the circumstances that we found ourselves in.’

‘COVID: Our Lockdown in Shanghai’ airs on Smithsonian Channel on May 25, 9pm