A businesswoman suing The Australian Financial Review for defamation has told the Federal Court she felt targeted by the newspaper and needed to take time off work after a column was published branding her a cretin.

Elaine Stead, former managing director of venture capital at the now-defunct fund manager Blue Sky Alternative Investments, is suing the Financial Review and high-profile columnist Joe Aston for defamation over two columns between February and October 2019 and a tweet by him in October that year. 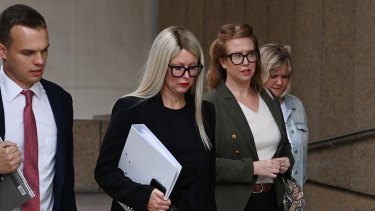 Elaine Stead, centre, and her sister Olivia, right, outside the Federal Court in Sydney on Wednesday.Credit:Nick Moir

Aston's first column on February 4, 2019, accused Dr Stead of making "fatuous investments in peanut start-ups" and pointed to Blue Sky's involvement in online wine retailer Vinomofo, now worth millions, and bespoke footwear maker Shoes of Prey, which had attracted a range of high-profile investors before its demise.

Aston also criticised a post by Dr Stead on her private Instagram account about a planned venture mission to Mongolia, describing it as a "white girl photo op" and labelling her a "feminist cretin".

The second column described Dr Stead as "set[ting] fire to other people's money", while the first called her a "prodigious destroyer of capital".

Dr Stead, who has a PhD in stem cell biology, told the Federal Court on Wednesday she was "utterly mortified" and panicked after the first column was published and felt "shame, embarrassment, humiliation and guilt". She felt the publication of a private Instagram post was an "utter invasion".

Dr Stead said she felt the first column marked a shift to the Financial Review "targeting me" rather than Blue Sky generally.

"Whether I had private social media, [Aston] … still gained access to it, he still mocked it, it was relentless and I didn’t see how I could get away from it, he would target me," she said.

She said she felt Mr Aston was "making an effort to degrade me" by reference to her gender, via the use of the word "feminist".

Dr Stead's barrister, Sue Chrysanthou, SC, told the court on Tuesday there was no other reference to feminism in the column, which also took aim at former Sydney Morning Herald and Age columnist Clementine Ford for unrelated social media posts, and the word appeared to be used as synonymous with "female".

Dr Stead took leave between March and June 2019 and told the court her "mental health was completely obliterated".

"I had to go see a psychologist because I was having suicidal thoughts," Dr Stead said.

She knew the second column "would be a death knell for my career", she told the court.

Ms Chrysanthou has previously told the court investment decisions were also made by a committee acting unanimously, rather than by Dr Stead alone.

Dr Stead alleges the articles and tweet convey a series of defamatory meanings, including that she is "cretinously stupid" and "made stupid investments in two worthless companies".

The Financial Review and Aston say none of the meanings were conveyed, but if the judge takes a different view they argue the honest opinion defence applies.

Catch all the day’s breaking news

At the end of each day, we’ll send you the most important breaking news headlines, evening entertainment ideas and a long read to enjoy.  Sign up here.

Impressive creations battling to be crowned Shed of the Year