The move prompted outrage from parents, including one who said they were ‘frustrated, angry, aghast and confused.’

Officials with the California Department of Social Services questioned toddlers at three Aspen Leaf Preschool locations in San Diego and pressed them about the schools’ Covid protocols, the Voice of San Diego first reported.

The Community Care Licensing Division of the CDSS later issued Aspen Leaf Preschool a Type A citation, meaning that it poses an ‘immediate’ risk to child health or safety, because it refused to enforce the state’s mask mandate.

Aspen Leaf Preschool’s owner Howard Wu wrote a complaint to the agency appealing the citation, in which he called the investigation a ‘simultaneous, multi-school raid’ that included in ‘unnecessary and inappropriate child interviews,’ according to Fox News, which viewed Wu’s complaint. 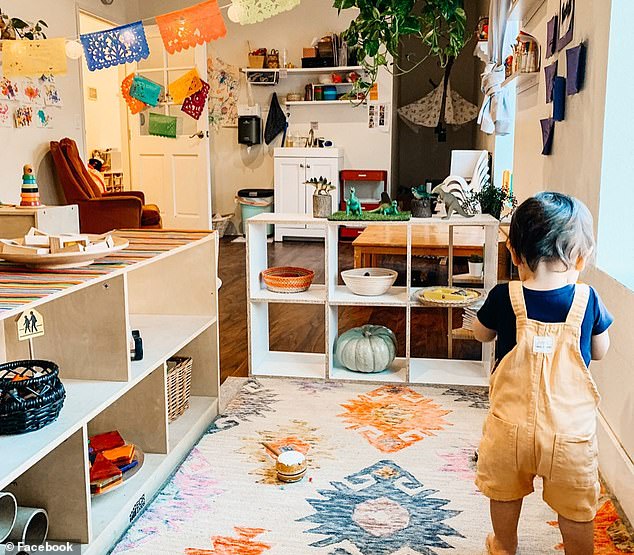 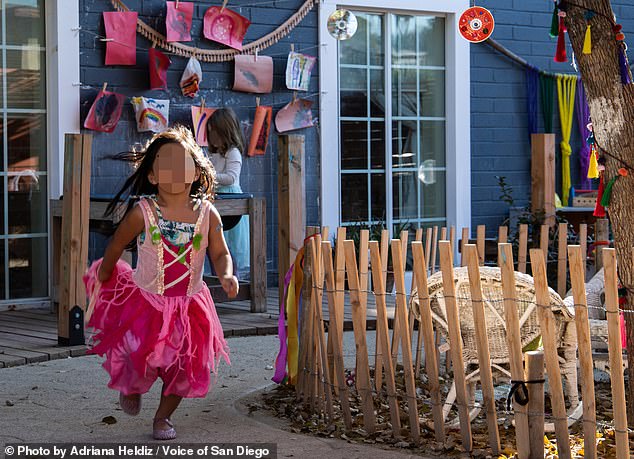 Aspen Leaf Preschool faced a Type A citation from the state’s Department of Social Services as a result of the investigation, meaning it poses an ‘immediate’ threat to child health or safety 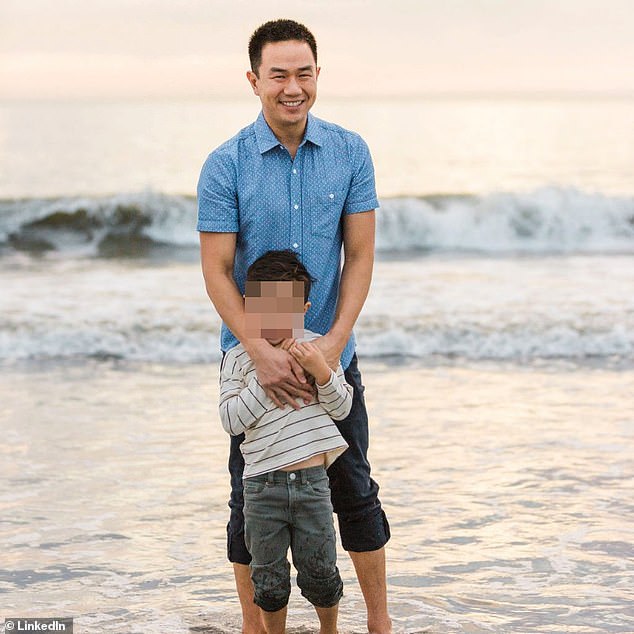 Owner Howard Wu is appealing a Type A citation, arguing that the agency does not have the authority to issue the citation when the state’s Department of Health put forth the mask rules

“This gross abuse of power is shameful and unacceptable for many reasons,’ wrote parents Stephanie and Richard Rosado in another complaint seen by the Voice of San Diego.

‘The people who ordered this to be done and those who participated should be held responsible,’ the parents wrote, telling the news outlet that they spoke to their 4-year-old son about not talking to strangers just a few days before the raids.

Another parent, Connie Wu – who is unrelated to Howard Wu, said her daughter wasn’t even 2 during the January interview and she’s too young to articulate how it made her feel.

“She’s not developmentally able to tell me. She doesn’t have the vocabulary to be able to talk about being interviewed by a stranger,’ Wu told the news outlet.

The agency carried out the investigations in response to a parent complaint in early January over Aspen Leaf Preschool’s mask-wearing policy. Wu said he has communicated the policy to parents since putting it in place and has never faced any previous backlash from parents.

The policy says that children cannot wear a mask while eating or taking naps, which accounts for about three hours a day – and that therefore there is ‘no health benefit’ to wearing a mask at all other times.

‘Every family we heard from after the inspections were furious about the interviews,’ Wu told Fox News. ‘We were open the whole pandemic about not masking children and the reasons why.’

Wu added the responses of parents in his complaint to the CDSS, with many arguing that the investigation was out of line and an abuse of power.

‘I do not feel this interview served my child’s safety or well-being and I believe it may have given a harmful impression about her obligations to speak with strange adults in private without known caretakers present,’ one parent wrote.

‘I understand that while the licensing agency is authorized to conduct private interviews with the children – this authority was put in place and intended for use when there is a situation of possible abuse, which is ENTIRELY absent from this situation,’ another parent wrote.

‘Therefore, this agency has blatantly overstepped their authority,’ the parent added. 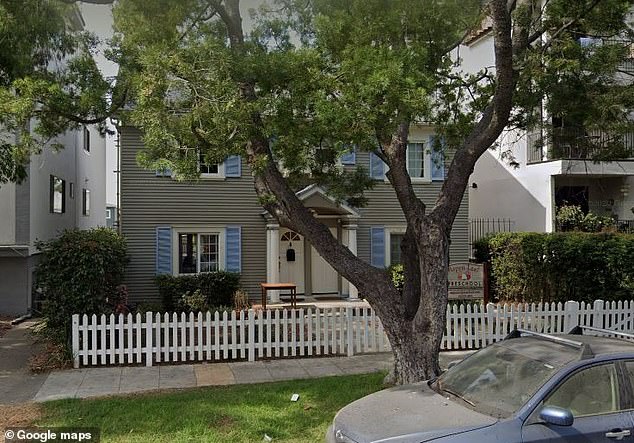 The agency carried out the investigations in response to a parent complaint in early January over Aspen Leaf Preschool’s policy against requiring children to wear face masks. Above is Apsen Leaf Preschool’s location on Third Avenue in San Diego 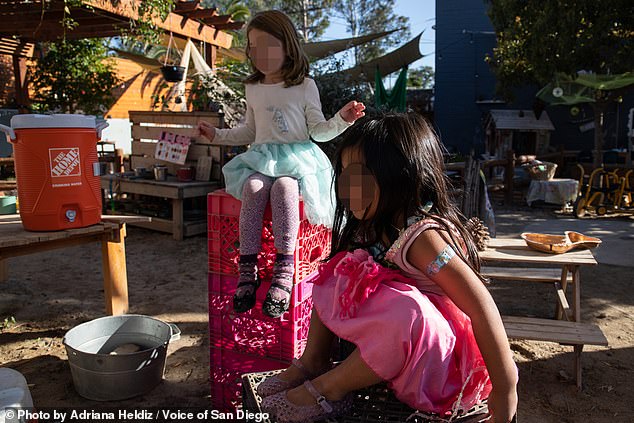 One parent recalled being ‘frustrated,’ ‘angry,’ ‘aghast’ and ‘confused’ on finding out that their toddler was questioned by state officials without parental consent 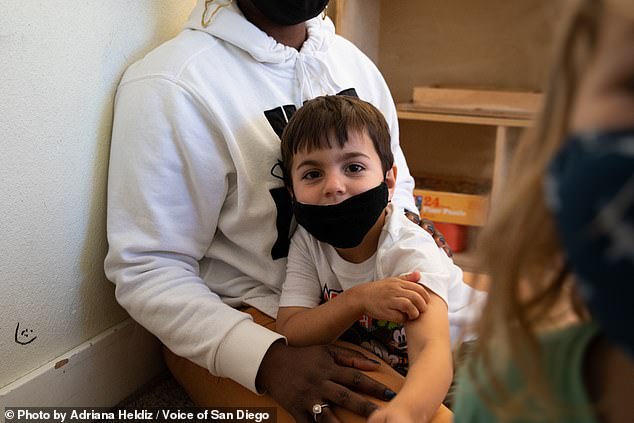 ‘Frustrated. Angry. Aghast. Confused. These are only a few of the words that describe what we felt as parents of a 3.5 year old who was questioned by government officials at his preschool regarding mask-wear indoors,’ another complaint reads.

Aspen Leaf Preschool responded to the citation by updating its Covid policy online to require face masks until the state lifts the rule on March 11. Wu said he did so to avoid being shut down, but would continue fighting against the citation.

Wu also argued that the CDSS does not have the authority to issue the citation when the agency did not institute the mask mandate, therefore the state’s Department of Health is responsible for enforcing it.

‘We believe in good faith that the agency doesn’t have jurisdiction to enforce another agency’s mask guidance,’ he told Fox News, adding that he believes the preschools were targeted unfairly because of his stance on mask mandates.

‘They could have issued us a citation in 5 minutes and let us take our challenge up through the proper channels. The simultaneous multi-school raids and the child interviews just felt like a power play.’

Aspen Leaf Preschool closed when the pandemic began in March 2020 and reopened that June, publicizing that it would not enforce the state’s mask requirement, according to the Voice of San Diego.

The school continued to operate that way without question, but CDSS officials visited the facilities in December 2021 and noticed that the children were not wearing masks. Wu said that they issued no citations or report at the time, but emailed him later reiterating the state’s mask requirements. 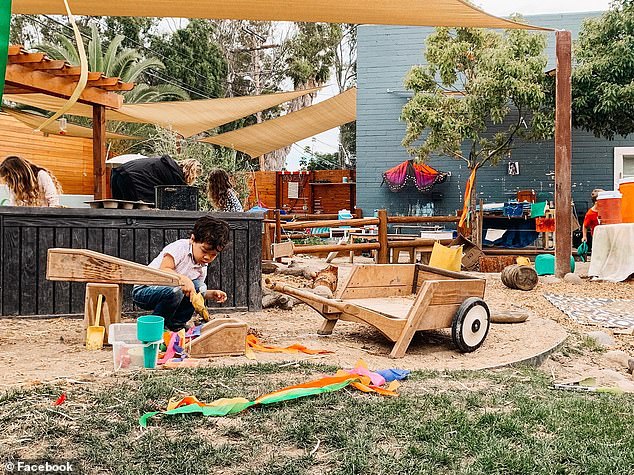 The CDSS defended its action in a letter to Wu, which was seen by Fox News, stating that it has the authority to “enter and inspect a licensed child care facility at any time, with or without advance notice, to secure compliance with, or prevent a violation” of state laws. Above, a child plays outside at Aspen Leaf Preschool in San Diego

Wu said that he did not expect the agency to take any further action, but a parent complained to the licensing authority during the Omicron surge in January. An investigator called Wu and said he needed to enforce the mandate, but his argued that the agency did not have the jurisdiction to make him do that.

Within a week, all three facilities were greeted by investigators who began questioning the children.

The CDSS defended its action in a letter to Wu, which was seen by Fox News, stating that it has the authority to “enter and inspect a licensed child care facility at any time, with or without advance notice, to secure compliance with, or prevent a violation” of state laws.

It added that the agency has the right to “interview children without prior consent and, when necessary, conduct the interviews in private.”

“Based on their personal observations and interviews of the facility directors, staff and children, CCLD staff determined that the licensee failed to ensure that staff and children used face coverings as required by the State Public Health Officer Order of June 11, 2021, thus violating the children’s personal right to safe and healthful accommodations,” the letter said.

The CDSS also sent a letter to parents who complained, which was seen by Fox News, in which CCLD deputy director Kevin Gaines said: “We want to ensure you that CCLD takes seriously its responsibility of ensuring the health and safety of children in licensed child care facilities. It is for this reason that CCLD spoke with your child.”

“A licensing evaluator is respectful of a child’s choice to answer questions. If at any point during an interview a child expresses or exhibits apprehension or discomfort, the interview is discontinued,’ the letter concluded.

The preschool was shut down was in early January for violating the state’s mask mandate and director Tiffany McHugh will never be allowed to work with children again after the California Department of Social Services revoked her license.

A California Christian preschool director has been barred from ever working with children again after she ‘failed to encourage’ two-year-olds to wear face masks in class.

Tiffany McHugh, the director of Foothills Christian Church Preschool in San Diego, had her license stripped after the Department of Social Services shut down the preschool because McHugh couldn’t get students to keep their masks on.

‘We were coming up against a lot of parents who didn’t want their children to be masked that young,’ McHugh told CBS 8.

‘There were a lot of children who were just too young to wear masks, they pull them off. it’s really difficult.’ 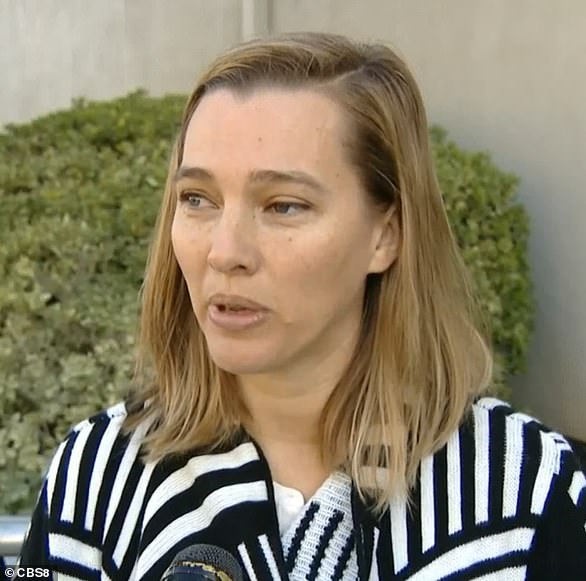 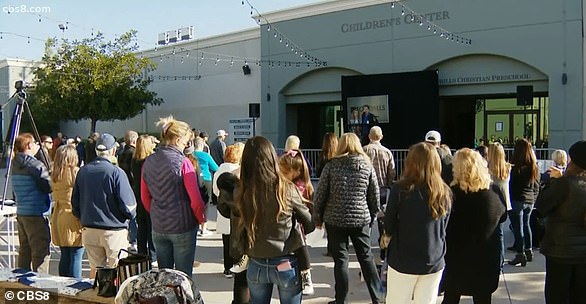 Parents are now protesting the closure outside of the school, saying they want their children to go to school there

Social Services began visiting the school in September following a parent complaint about the mask policy. In November, the school was cleared of the violation, but a couple of weeks later, the department came back for a routine check-in and found students not wearing masks again.

‘We were going to continue working on it, but three days later they came in and shut us down,’ McHugh told CBS 8.

The department cited that the preschool failed to make sure employees were wearing a mask, in addition to ‘not encouraging’ students to do so. 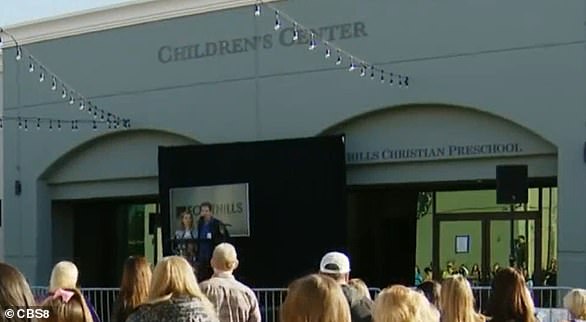 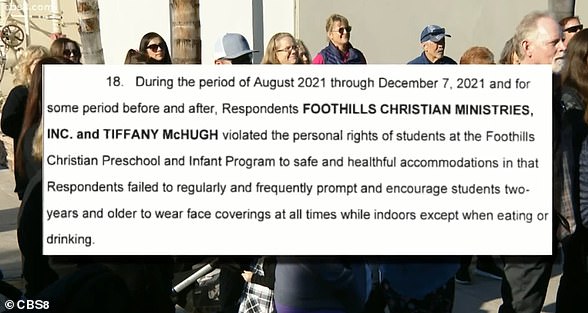 It also reportedly said that McHugh stopped state workers from inspecting the building to give employees and students time to put on a mask.

The department alleged that the school failed to ‘regularly and frequently prompt and encourage students two years and older to wear face coverings at all times.’

In addition, the department took away her license forever and she will no longer be allowed to work with children again.

McHugh said the Christian school has appealed the suspended license and that hearing is scheduled for February 11.

Now, parents are protesting the closure outside of the school after the closure on December 10 after following months of working hand-in-hand with the state to improve.

One parent, who spoke to CBS 8 and was not identified, said: ‘We feel our children are safe in her care and the care of the other staff members. 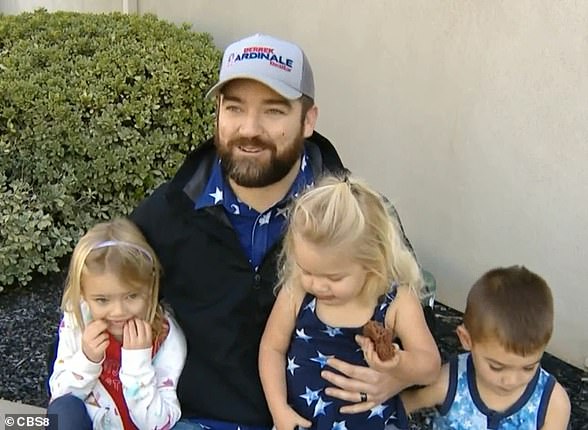 Several parents have spoken out about the close. Derrek Cardinale (left) said it was the ‘safest school around’ and was ‘angry’ that it was forced to close

Another parent, realtor Derrek Cardinale, said that Foothills Christian school the ‘safest school around’ and said he was ‘surprised and angry’ that the school is being shut down.

Several are claiming the school was ‘target’ after the department visited 11 times in just a few months, compared to very rarely at other neighboring schools.

‘They targeted us,’ David Hoffman – senior pastor at Foothills Christian Church, told the KUSI. ‘Have you ever tried to put a mask on a two-year-old? I mean, c’mon!

‘A lot of these parents do not want their kids wearing masks.’

DailyMail.com has reached out to the California Department of Social Services for comment.

Masking children has become a hot button issue in recent months. Vaccines are only available for children aged five and up, with many states encouraging children younger than that to don the face coverings, even though they are at very low risk of a serious or fatal COVID infection.

The real-life baby shark! Mutant fish is born with 'a human face'