Residents are urging councils to provide rebates to households that switch to cloth nappies and reusable sanitary products, as existing schemes are overwhelmed. 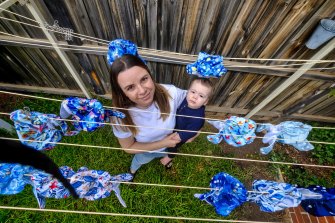 Alana Archer- Veith with her nine- month-old son, Everett, and her stock of reusable nappies.Credit:Luis Ascui

A further 10 Melbourne councils – including Monash, Glen Eira, Nillumbik, Dandenong, Boroondara, Bayside, Stonnington and Yarra Ranges – have lodged a joint funding submission to Sustainability Victoria to investigate a reusable nappy program that could be rolled out across the state.

“As councils introduce food waste recycling services to take food out of the garbage bin, nappies are becoming one of the most significant waste streams in household waste bins,” Monash mayor Brian Little said.

In Australia and New Zealand, 3.75 million disposable nappies are used each day and the items take 150 years to break down. Sanitary products such as tampons and pads generate about 120 kilograms of waste per person every year.

It’s an issue that councils in fast-growing areas are particularly attuned to. More than 100 babies are born in Wyndham in Melbourne’s outer south-west every week, generating large quantities of disposable nappies that end up in landfill.

Wyndham mayor Adele Hegedich said while cloth nappies required detergents and water to wash, they were a better alternative for the environment and cheaper for parents in the long run.

Wyndham trialled a scheme last April where residents received a 50 per cent rebate on cloth nappies, capped at $100, and reusable sanitary items, capped at $50. Its launch was timely: the rebates became available just as panic-buying swept through Melbourne supermarkets, leading to a shortage of disposable nappies. The scheme has now become a permanent fixture, with 364 households claiming a rebate.

Mother-of-two Alana Archer-Veith said the rebates encouraged her to make the switch to reusable nappies for her two young sons.

“They are a big investment,” the Point Cook resident said. “I wouldn’t have looked at it as seriously if that rebate hadn’t been available.”

After forking out $350 for 18 reusable nappies, she received a $100 payment from the council. Her nappies have already paid for themselves and Ms Archer-Veith said she felt good about reducing her ecological footprint.

“It’s not too daunting once you get going,” she said.

The City of Casey’s scheme has closed until the middle of the year due to overwhelming demand, with 293 rebate applications received in just 10 months. The scheme, which started providing nappy rebates in 2008 and has since expanded to sanitary products, has paid out $24,000 to residents this financial year.

Michael Jansen, the council’s manager of sustainability and waste, said every baby in cloth nappies prevented about 667 kilograms of disposable nappies from reaching landfill every year.

Author and zero-waste advocate Erin Rhoads has launched a petition calling for Moonee Valley council to introduce a rebate. She is encouraging her 26,000 social media followers to also take action. More than 14 active petitions are now calling on Australian councils to introduce the rebates.

Ms Rhoads said a rebate would provide access to reusable nappies and sanitary products to those who couldn’t afford them, reward those trying to minimise their waste and deliver savings to council by reducing their waste-disposal costs.

She referred to UK research which found that four local councils saved $575,000 in waste costs over four years as a direct result of cloth nappy rebates. While Ms Rhoads advocates for reusable nappies, she acknowledges they are not always an option.

“We are not trying to force this on everyone,” she said.

Renee Robbins recently launched a petition calling on her council, Glen Eira, to introduce a rebate scheme for reusable nappies and sanitary products.

She said a rebate would encourage more people to take up these environmentally friendly alternatives. “It’s about normalising this as an option,” she said.