Singapore: Chinese President Xi Jinping is expected to raise the AUKUS deal when he meets with Indonesian President Joko Widodo in Beijing next week, as China ramps up its campaign against the nuclear submarine agreement.

Widodo will be the first major leader to visit Beijing since Russian President Vladimir Putin attended the Winter Olympics in February. China’s Foreign Ministry on Thursday confirmed Widodo would arrive on Monday for two days of meetings to discuss COVID-19, economic investment and regional security. 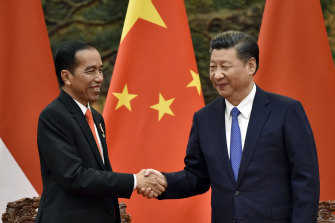 China released a report by two of its state-backed think tanks on Thursday criticising the deal between Australia, the United Kingdom and the United States, warning it could lead to nuclear proliferation in the region. Those claims were rejected by Australia’s Department of Foreign Affairs, but officials are now preparing for an ongoing international campaign against the AUKUS deal which will not deliver submarines until at least the 2030s.

Indonesia, which is hosting the G20 in Bali this year, is seen as a key ASEAN powerbroker and a vital economic partner for China as it looks to expand its influence in South-east Asia. Malaysia has been forthright in its criticism of the deal, warning it could lead to a nuclear arms race in the Indo-Pacific, but Indonesia has been more cautious, with Defence Minister Prabowo Subianto arguing he understands the need for countries to protect their national interests.

Wang Yiwei, the vice president of the Academy of Xi Jinping Thought, said he expected AUKUS to be on the agenda at the meeting between Xi and Widodo. Despite recent overtures by the Chinese government aimed at stabilising relations with Canberra, Wang said Beijing remained sceptical of Australia’s security and military intentions. 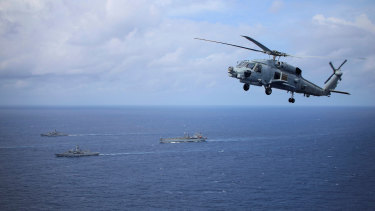 “This friendly, cute and honest neighbour from afar has suddenly changed. Five eyes, AUKUS, the Quad, Australia is everywhere,” said Wang, who is a professor of international relations at Renmin University. “The question I get asked the most is what’s wrong with Australia?”

Wang said South-east Asian nations had questioned why Australia needed nuclear submarines. “Who is a threat to Australia in the South Pacific?”

China has at least 60 submarines in its fleet, including six nuclear-powered attack vessels. Australia has six ageing diesel-powered submarines.

But the China Arms Control and Disarmament Association and China Institute of Nuclear Industry Strategy report claimed the AUKUS deal would set a “dangerous precedent” because it would give non-nuclear states such as Australia access to weapons-grade nuclear materials for the first time. “[This would] have a profound negative impact on global strategic balance and stability,” the report said.

The Australian government has reiterated that nuclear materials would only be used to power the vessels and Australia has no plans to acquire nuclear weapons.

“We are not a nuclear power. There are nuclear powers in this region but Australia is not one of them,” Foreign Minister Penny Wong said in Malaysia last month. “What we are doing is replacing an existing capability with a new capability and that is nuclear-powered submarines.”

Opposition defence spokesman Andrew Hastie on Friday said, “authoritarian powers are on the move” and it was time to bolster Australia’s security in the Indo-Pacific.

Hastie said Australia should be open to either the US or the UK providing the submarine technology. The AUKUS deal committed the three nations to cooperating on the vessles, but it remains unclear whether Australia will lock in the US Virginia class or the UK’s Astute-class as their preferred model for the $170 billion project. The US has six times as many submarines as the UK.

“There’s a lot of symmetry with the United Kingdom that we share, and so I just want to UK to have a good bid, and that means a good public discussion in Australia that doesn’t exclude them, and we only just talk about the United States,” he said.

Queen refuses to back down on Megxit terms despite Oprah interview