Cold Feet star James Nesbitt carried his father’s coffin at his funeral as he paid tribute to a ‘greater listener’ after his death aged 91.

The Northern Irish actor and his sisters listened to prayers for his late father and were also joined by footballers from the 91-year-old’s favourite team.

James Nesbitt Snr died last Friday, aged 91. He was the headmaster of a primary school in Lisnamurrican, near Broughshane in Co Antrim.

Prayers and tributes were said outside the family home in Castlerock, near Coleraine, in Co Londonderry before his interment at Downhill Burying Ground. 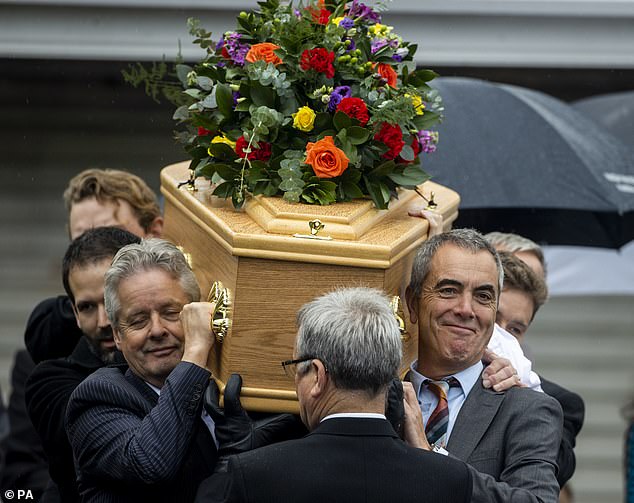 Northern Irish actor James Nesbitt (front, right) carries his father’s casket in Coleraine, Northern Ireland, ahead of the funeral of his father, to be held at Downhill Burying Ground 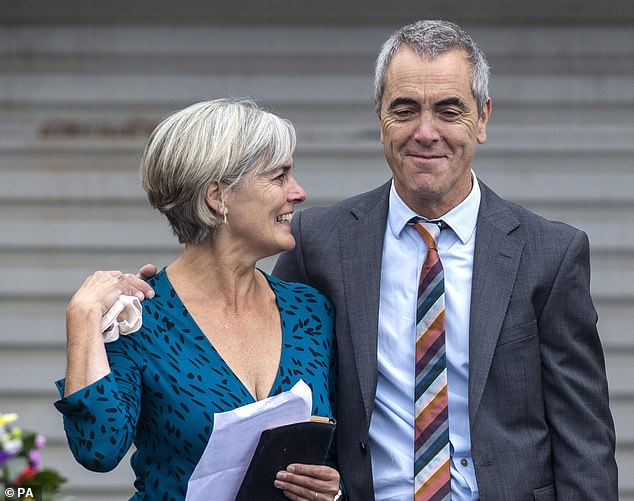 Nesbitt is comforted by his sister Andrea as they stand listening to prayers at the family home in Northern Ireland, ahead of the funeral of his father 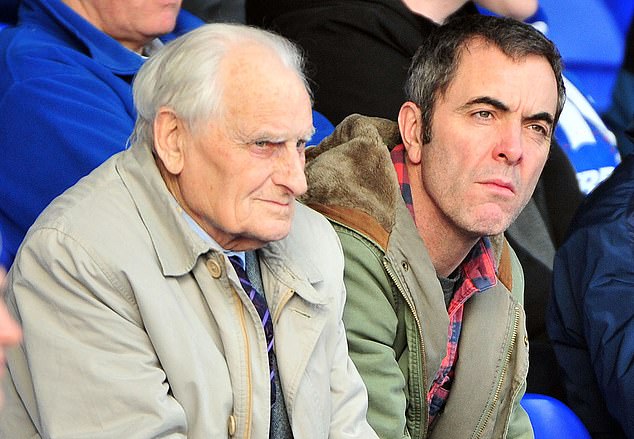 Nesbitt pictured with his father, James Nesbitt Snr, during a game at the Coleraine showgrounds in March 2012. The 91-year-old passed away on Friday

Nesbitt described his father as a ‘great listener’ and said that shortly before his death he had been writing a history of his life.

‘You can imagine how long that took,’ he told mourners.

‘He was also planning for his funeral and he wrote ‘I would like to dedicate this reading to all those paid or unpaid, family or strangers who have cared for me in my years of affliction. I suppose I am a rather elderly, widowed, orphan’.

‘This reading, to my mind, sums up Dad. Dad bled love.

‘I want to thank all who have been in Dad’s life – his beloved wife and my mother May, and his sisters, his daughters and nieces and his friends, his grandchildren, great-grandchildren and all those who he adored and loved.

‘Dad was so proud of Margaret, Kathryn and Andrea. They cared for him and loved him, he adored them and was so proud.

‘It wasn’t always easy and Kathryn probably saw that more than most as she dedicated so much of the last year of his life looking after him. 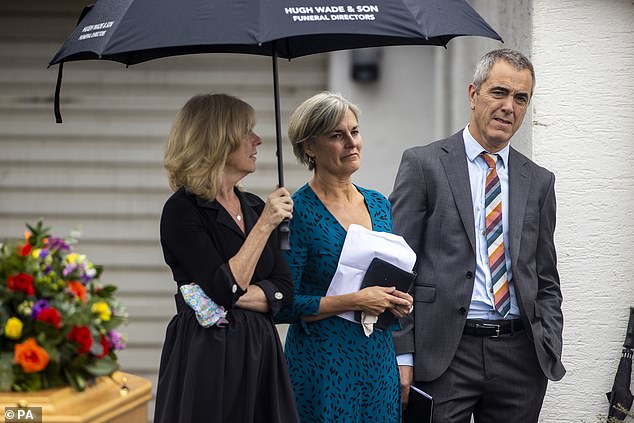 Nesbitt pictured with his sisters Kathryn, left, and Andrea, centre, as they stand together outside the family home in Coleraine, Northern Ireland, as prayers are being said 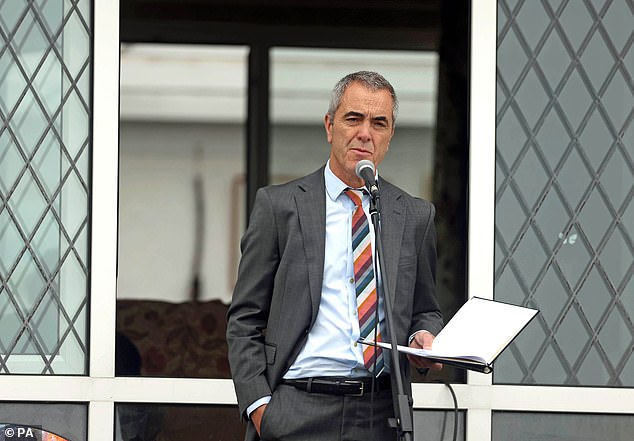 Nesbitt during family prayers outside the home in Coleraine, Northern Ireland, ahead of the funeral of his father today, which will be held at Downhill Burying Ground 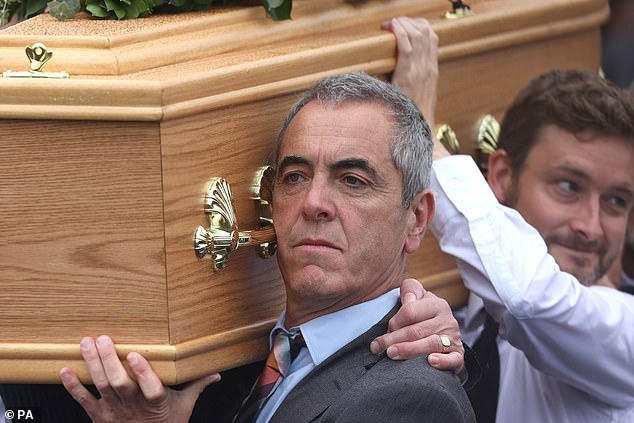 Nesbitt carries his father’s casket today. The actor described his father as a ‘great listener’ and said that shortly before his death he had been writing a history of his life

Nesbitt played Adam in the popular television series Cold Feet and is chancellor of Ulster University.

Mr Nesbitt Snr was a life-long supporter of Coleraine FC and manager Oran Kearney and player Eoin Bradley were among those attending his funeral.

A song by Harry Connick Jr was played as the cortege passed mourners lining the route to the burial.

His father lived in the seaside village of Castlerock, Co Londonderry, and was pre-deceased by his wife May.

Actor Nesbitt previously said: ‘As well as being a brilliant teacher he was a passionate Coleraine football fan. 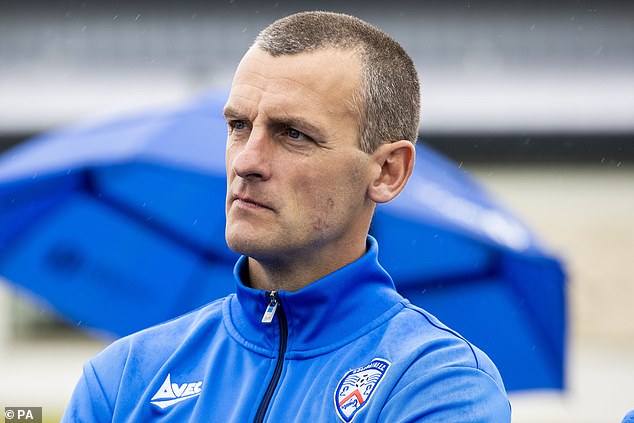 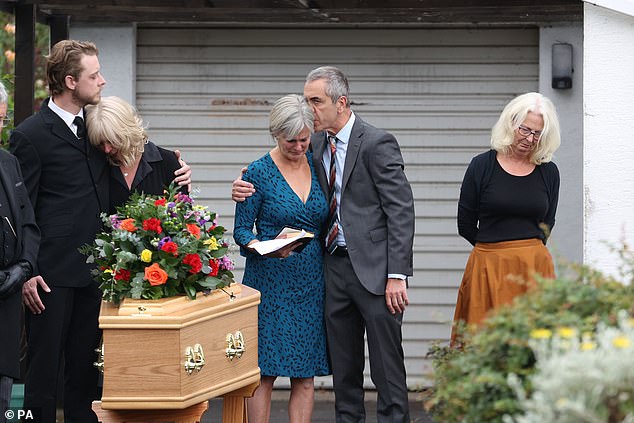 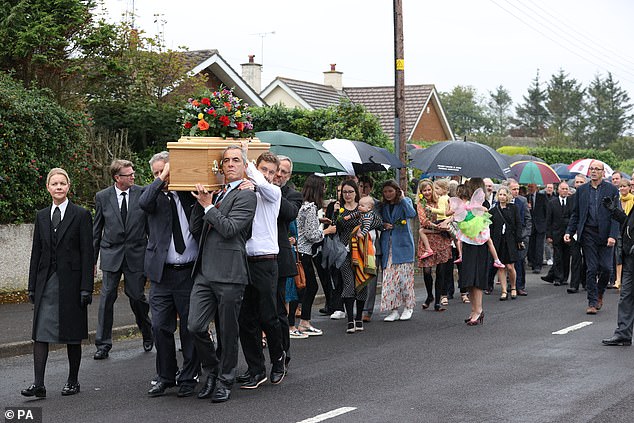 Nesbit carries his father’s casket while mourners walk behind ahead of the funeral today. A song by Harry Connick Jr was played as the cortege passed mourners lining the burial route 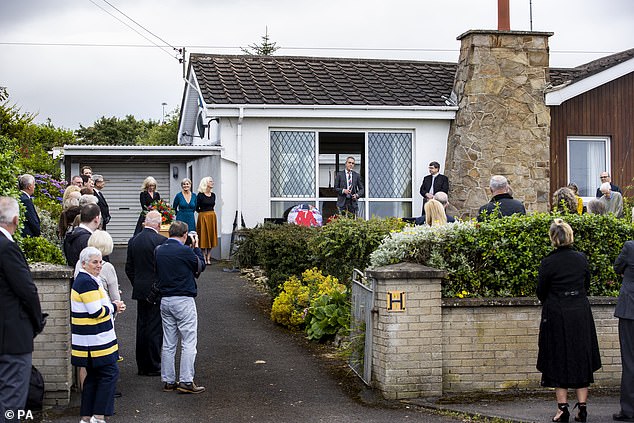 Nesbitt during family prayers outside the family home in Coleraine, Northern Ireland today as people pay their respects ahead of the funeral of his father

‘One of my most cherished memories is of being with him to watch Coleraine lift the Irish Cup two years ago at which dad was presented with Skinner Bradley’s winning medal.

‘He leaves behind a family who will miss him more than words can say and I speak for myself, and my sisters Margaret, Kathryn and Andrea, when I say that he was a truly great man, and a wonderful father, grandfather and great-grandfather.’

Coleraine FC Chairman Colin McKendry earlier said: ‘James got to know the players personally and travelled on the team bus to many of our big matches, including the Irish Cup win in 2018.’

He added: ‘Unfortunately he wasn’t able to go to many matches recently due to ill health but I’m sure he would have been proud of our efforts last season.

‘Not only was James a fantastic supporter, but he was also a great sponsor and we are indebted to him.’