Fears of a coronavirus-driven global economic slowdown have mounted after stock markets gave a lukewarm reaction to the emergency cut in US interest rates and new data showed that China and Hong Kong came to a virtual standstill in February.

As the World Health Organization warned that panic buying and market manipulation was “rapidly depleting” supplies of protective equipment, world leaders and central banks continued their scramble to cushion the economic impact of the outbreak.

But shares in Asia struggled to gain traction despite the US Federal Reserve’s surprise 0.5% cut in borrowing costs.

Coronavirus latest: at a glance

It is the first time the Fed has used an emergency cut outside its usual meeting schedule since the height of the global financial crisis in 2008 and was aimed at steadying investor nerves after 10 days of heavy losses on financial markets.

The World Bank also announced a $12bn package to assist countries grappling with the health and economic impacts, with its president, David Malpass, saying that there were still “many unknowns” about the virus and “much more” aid might be required. British banks are preparing emergency loans for “at-risk” companies left exposed by the crisis.

There were more than 93,150 confirmed cases of the Covid-19 illness on Wednesday across 78 countries, and 3,198 deaths. Almost 50,700 people are reported to have recovered from the illness.

The virus outbreak continued to have widespread non-economic impacts. Japan cancelled an upcoming ceremony to commemorate the 2011 triple earthquake, tsunami and nuclear disaster, and South Korea’s president cancelled his planned trip to the UAE, Egypt and Turkey.

Despite an initial bounce on Wednesday, the Nikkei in Tokyo closed the day flat while in Sydney the ASX200 benchmark index lost another 1.7%. The safe haven of US government bonds also held on to recent gains, as did the gold price. The Vix volatility index, also known as the “fear index”, spiked to 36.85 points.

Kerry Craig at JP Morgan Asset Management in Melbourne summed up the mood sweeping across markets when he said the Fed’s move may have misfired.

“While the action was intended to steady market confidence, the sharpness of their reaction and the off-schedule timing of the move could be interpreted as the Fed being much more concerned about the economic impact than first thought.”

Rishi Jalan, Citigroup co-head of debt capital markets syndication in Singapore, agreed. “This [Fed] decision shows the coronavirus impact is real and could have a material impact on growth. For market participants, it shows a thinking of ‘The Fed is expecting something that we have not yet priced in.’”

Shares in Shanghai and Hong Kong were also in red after two closely watched surveys showed the depth of the economic shutdown in the wake of the virus outbreak.

The spread of the virus and associated measures to contain it, including city-wide shutdowns, mass quarantining, social distancing, factory closures and travel restrictions, have disrupted supply chains and contributed a devastating blow to retail and services sectors. 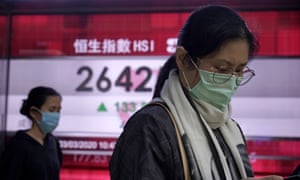 In February China’s service sector collapsed to its lowest level since the global financial crisis, with the Caixin/Markit services purchasing managers’ index (PMI) dropping from 51.8 in January to 26.5 in February. The monthly index indicates expansion if over 50. It followed similarly bad figures about the country’s giant manufacturing sector at the weekend

In Hong Kong, the IHS/Markit private sector PMI revealed a deepening recession, falling for the 23rd month in a row, from 46.8 in January to 33.1 in February, the steepest decline in history. Job shedding accelerated to its steepest rate in more than 18 years.

The territory’s economy appears to be in its worst shape for decades, having already suffered six months of pro-democracy protests. This week the vice-chairman of the city’s chamber of commerce said the impact of the coronavirus was more severe.

The Hong Kong Monetary Authority (HKMA) lowered a key interest rate by 50 basis points to 1.5% on Wednesday and Hong Kong’s government last week announced a HKD$120bn stimulus package. But the outbreak was still expected to have severe ramifications, the authors of the PMI survey said.

“IHS Markit estimates the Hong Kong economy to shrink by an annual rate of 1.3% in 2020. That said, further GDP downgrades are possible should the situation continue to worsen in coming months,” said IHS Markit principal economist Bernard Aw.

“Business confidence plummeted in the city, with a majority of firms anticipating lower future output amid expectations that the coronavirus situation will persist in coming months.”

Midland IC&I, a Hong Kong based property agency, told SCMP Hong Kong retail rents and prices could drop by more than 40% to 2006 levels, if retail sales and the economy didn’t improve.

The agency predicted that in the three months to September the number of vacant shops in key districts – including the world’s most expensive retail space, Causeway Bay – would double on 2018 levels, to one in seven.

Vale Carla Zampatti: ‘Outsider’ who blazed a trail to the front and centre of Australian fashion