London: Coronavirus has hit the meeting of G7 foreign ministers underway in London which is also being attended by Australia’s Marise Payne.

A British official told Reuters that two delegates from India tested positive on Tuesday night, London time, and as a result, the entire delegation is now self-isolating.

“The meeting had been enabled by a strict set of COVID protocols, including daily testing of all delegates,” the British official said. 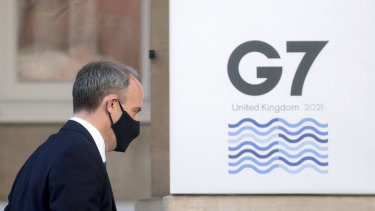 India’s External Affairs Minister Subrahmanyam Jaishankar said he would attend the meeting virtually, despite travelling to Britain for what was touted as a COVID-secure diplomatic gathering.

“Was made aware yesterday evening of exposure to possible COVID positive cases,” Jaishankar wrote in a tweet, shortly after the news broke in the British media on Wednesday evening (AEST).

“As a measure of abundant caution and also out of consideration for others, I decided to conduct my engagements in the virtual mode.

“That will be the case with the G7 meeting today as well.” 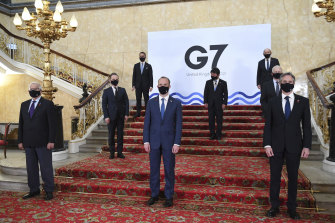 “We deeply regret that foreign minister Jaishankar will be unable to attend the meeting today in person … but this is exactly why we have put in place strict COVID protocols and daily testing,” a senior British diplomat said.

The Indian delegation had not yet attended the in-person meetings at Lancaster House so the likelihood of the outbreak spreading further is being played down.

India has been placed on Britain’s red list meaning any arrival from the country has to go into 10-day hotel quarantine. But diplomats were given an exemption to attend the talks, which include Australia’s Foreign Minister Marise Payne, one of just 2.39 million Australians to have received a vaccine enabling her foreign travel. 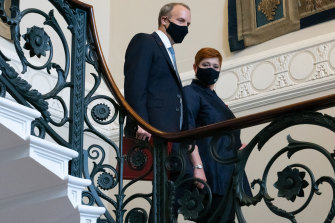 On Wednesday, she held a bilateral meeting with Britain’s Foreign Secretary Dominic Raab at his residence 1 Carlton Gardens.

While Australia is not a member of the G7, it has been invited by Britain this year, with Tuesday’s discussions dominated by how the group could use its clout to project force against China’s rise.

Prime Minister Scott Morrison is set to travel for the G7 leader’s summit scheduled for June in the seaside county of Cornwall.

But the coronavirus scare at the foreign ministers’ meeting could be a blow for Britain’s ambitions to host not just the June summit but also the next round of UN climate talks in Glasgow in November.

On Tuesday, Chancellor of the Exchequer Rishi Sunak also scheduled a face-to-face meeting of G7 treasurers for later in the year in the UK.

The British government, which is on track to vaccinate its entire adult population with at least one dose by July, is keen to stage the meetings but that goal is now likely to be called into question with the pandemic raging in India and Brazil and widespread vaccine inequity.

Holidaymakers misled over prices and availability by Covid test firms