Motorists face the threat of new automatic £130 fines imposed by cash-hungry councils under Government plans to give priority to cyclists and pedestrians after the coronavirus crisis.

Ministers have signalled that they are prepared to hand controversial powers to councils to enforce civil penalties for minor driving offences such as straying into cycle lanes or stopping in box junctions.

Enforcing the rules is currently the job of the police but they rarely take formal action over so-called moving traffic violations.

But to help councils fund and operate new cycle lanes and other traffic-reduction measures after the pandemic, Ministers are preparing to hand over legal powers of enforcement to local government officials. 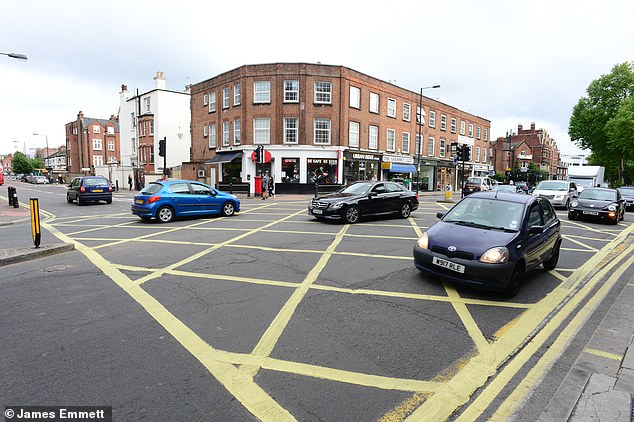 A yellow box junction nicknamed ‘the moneybox’ has been branded the country’s most lucrative traffic penalty hotspot.

The junction at New King’s Road and Bagleys Lane in Fulham, West London, raked in an incredible £1.6million in fines for Hammersmith and Fulham Council in 2016.

And following moves to reduce the number of motorists using a local rat run, that sum is projected to rise to up to £1.9million over 12 months if drivers pay the charge within 28 days of being penalised.

Local residents are furious at the move. Rob McGibbon said: ‘Drivers are being funnelled like lemmings into the path of a cash hungry CCTV fines system.’

The change would bring the whole of England into line with London where local transport officials already use traffic cameras to issue more than a million penalty notices every year.

Fines in the capital are set at £130 for each violation. The move would mark a retreat from the Government’s previous position when Ministers refused to hand councils such powers, fearing they would treat motorists as cash-cows.

Junior Transport Minister Baroness Vere told the House of Lords that the Government was looking at giving councils enforcement powers under the 2004 Traffic Management Act.

It comes as the coronavirus crisis prompts plans for a dramatic expansion of cycling and walking to reduce the use of public transport in towns and cities.

Both groups have long lobbied Ministers to activate Section 6 of the Traffic Act, which covers relatively minor violations such as driving in cycle lanes, disregarding one-way systems or box junction markings, and failing to give priority to oncoming traffic.

In a parliamentary question, Lib Dem peer Lord Bradshaw asked Transport Ministers whether they intended to extend the civil enforcement powers contained in the Transport Management Act 2004 (section 6) to authorities outside London to better enforce moving traffic offences, in order to protect cyclists and pedestrians’.

Baroness Vere replied: ‘We are giving thought to the role these powers could play in helping councils to deliver their transport recovery plans.’

The Local Government Association, which represents councils, says they need the powers because police have ‘largely ceased to enforce moving traffic offences’.