Whatever you’ve been doing during pandemic shutdowns, you probably weren’t having as good a time as Adam Porter was one morning – as the world now knows.

The man can dance, and dance he did. He danced like no one was watching.

At the time, he thought one bored friend might be tuning in to the lockdown live stream of the giraffe enclosure at Melbourne Zoo, where he works as a zookeeper. 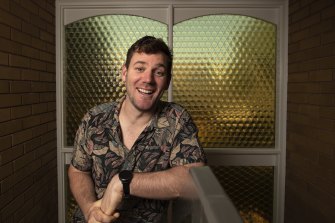 Adam Porter did a little dance to the live stream camera in the giraffe enclosure. When it went global, the response made him think differently about the nature of humans. Credit:Penny Stephens

But someone else caught the moment, recorded it, shared it on Reddit – and it became a moment that spread a little light-footed joy around a pandemic-panicked world last March.

As Porter, 30, says on his Instagram profile: “I probably made you smile during lockdown.“

That he did, and it remains his standout memory of the past two years where he has since seen his work put on hold and friends endure tough times as the pandemic persists into a second year of chaos.

Porter, whose training is in musical theatre, says his viral fame was an accident.

“There’s a camera on the giraffe enclosure, at the back of the orangutan sanctuary. And we’d been told that we could be seen on camera at that gate, to just be mindful. Be good,” he says.

“I messaged my friend on a Saturday morning and said, ’Giraffe Cam, 10am”. I just improvised on the spot. The question most commonly asked is, what was the song? Well, there was no song. There’s just me having a great time in my head, thinking that my one friend was watching. Not realising someone had screen-recorded it.

“A few hours later, a colleague sent me a message with a link saying, ‘are you aware that you’re on the front page of Reddit’?”

The Australian media picked it up, then it went around the world, via the BBC, CNN and others. It was a needed tonic, a moment of whimsy for a fearful planet.

“I got home and my housemates said, ‘Here’s a snapshot of the coverage’. I walked in the door and my face was on The Project. The thing I’m shocked and surprised about is that 99 per cent of the reaction was healthy. The internet can be a cruel place but this just brought a smile, especially in those early days when we were all so scared of what was actually going on.

“I got a lot of digital and literal fan mails in the post, from people who were writing to say, ‘I lost my job today, because of this pandemic, or my business closing, because no one knows what’s going on. And I turned on the television and saw this. And you made me smile.’

“Beautiful. It was just nice.”

For Victorian tourism, it has been two years of playing catch-up with disasters, with figures from Tourism Research Australia showing a 69 per cent drop in tourist spending in the 12 months to March 2021, wiping billions from the economy. 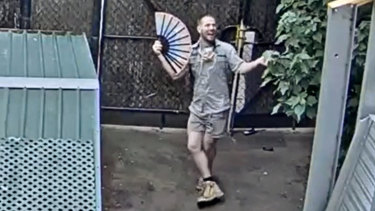 The dance that went viral in a pandemic and made Adam Porter an internet sensation.

There were the bushfires that turned the 2019/2020 summer into a hellscape. And before we could take a breath of smoke-free air, along came COVID-19.

Behind the startling dollar numbers of the collapse are the livelihoods of people like Adam Porter.

He stayed employed by the zoo, where his role as presenter of live animal shows became a behind-the-scenes job caring for primates and reptiles until March this year. He took a second position at URBNSURF, the landlocked city surf park near Tullamarine whose short life since it opened in January 2020 has been constantly disrupted.

Right now, he is furloughed from both jobs, and it has happened just as he and his partner Luke have bought their first home. His only income is the lump sum COVID-19 disaster payment.

“I work for two very different organisations under that tourism bracket. One is a Melbourne establishment, the other one very new and very much in its infancy. But I’ve been very lucky to work for them. It’s just been that open-and-close thing, but the people I work with are wonderful. If anything, it’s just made us stronger.

“But we’re a cultural city. For someone who comes from a performing arts background and moves in circles of fellow performing artists and seeing how they were decimated across the industry, it’s just shocking, and it’s still happening.

And when things get gloomy, he always has that famous dance to look back on. He believes it was a moment that changed him forever and for the better.

“One morning I got up and read all the comments — even though they say to never read the comments — and for the first time in my life, at nearly 30 years old, I actually accepted who I was,” he says.

“For that moment, I was just being me, dancing randomly for a friend, and the world embraced it.”

What do you miss most about life before COVID?

What is your best lockdown strategy?

Checking in with yourself. Do you need to move? Drink more water? Get away from a screen? And when in doubt, go outside for a walk.

Has there been a silver lining?

You can still sing in the shower. Many a one-act musical can be performed in the smallest of bathrooms.

Covid vaccine from Oxford University and Astrazeneca is APPROVED