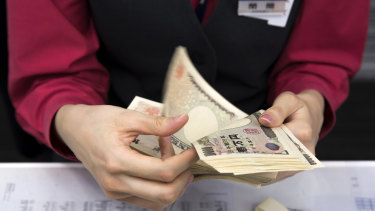 The debate is on about whether the use of cash spreads coronavirus. Credit:Bloomberg

His remarks appeared to contradict those of World Health Organisation officials who have advised people to wash their hands after handling banknotes.

"We know that money changes hands frequently and can pick up all sorts of bacteria and viruses and things like that," the WHO official told The Telegraph.

"We would advise people to wash their hands after handling banknotes and avoid touching their face."

The WHO didn't explicitly say that money specifically is linked to coronavirus. However, the agency did say it's "advisable to use contactless payments to reduce the risk of transmission," the Telegraph reports.

In Seattle, Dick's Drive-In is asking customers to use debit or credit cards when paying for burgers, shakes and other fare, in order to help slow the spread of the novel coronavirus.

The policy, which the burger chain introduced on Thursday, is voluntary: It's still accepting cash at all seven of its locations.

But according to signs posted at its restaurants and a statement on the company's social media sites, Dick's wants customers to pay with plastic "if possible" and is letting them know cash orders will take longer because "our employees have extra sanitisation procedures for all orders that involve cash."

There is no consensus among health authorities on whether cash can spread the coronavirus, which has caused outbreaks of the COVID-19 illness across the globe.

Officials at the US Centres for Disease Control and Prevention were unable to confirm whether the agency had specific guidance on handling cash.

A spokesperson for Public Health – Seattle & King County said the agency also had no specific policy but added that it was "looking into the question."

Although banknotes are often dirty and are known to harbor potential pathogens, "we just don't have a lot of good evidence to suggest that paper money or coins are a source for this particular infection or any infection," said Marilyn Roberts, a microbiologist with the Department of Environmental and Occupational Health Sciences at the University of Washington.

"We don't know that money has ever been the 'point zero' of an infection."

The Chinese government has focused on cash as a possible vector for the coronavirus. Banks in China have been ordered to disinfect cash using ultraviolet or heat treatments before returning it to circulation, according to CNBC.

In France, the Louvre last week banned cash for ticket sales after museum workers walked off the job over coronavirus fears.

Because the primary way the coronavirus spreads is person to person, said Roberts, the UW microbiologist, the larger risk for consumers, especially older ones, is being in crowded places.

"I don't think how you pay is the major issue," she added.

Jasmine Donovan, Dick's president, said the company adopted its new payment policy after identifying "cash handling as the one place where we needed to do more" to "protect our crew and customers" from the coronavirus.

Under the policy, employees who take a cash order must use a hand sanitiser or wash their hands with soap and water before serving the next customer.

When customers pay with a credit or debit card, the card is inserted by the customer into a card reader and is never touched by employees.

The policy took several days to implement, in part because the company needed to source adequate supplies of hand sanitiser, Donovan said.

Starbucks has instructed employees to wash their hands "after each (cash) transaction," said an employee at a downtown store. A spokesperson for the Seattle-based coffee company was unable to confirm its policy for handling cash.

A bookkeeper at a Seattle-area Safeway said many store employees already treated coins and paper currency as a health risk, given how routinely cash is passed from person to person.

"Money is disgusting," the bookkeeper said. "I'm always wearing gloves, for sure."

Whether consumers are ready for a no-cash policy is unclear.

Marissa Baker, an expert in occupational health at the University of Washington, said one concern around a ban on cash would centre on consumers who lacked access to a credit card or a bank account.

From the Archives, 1894: The last days of Martha Needle, the Richmond poisoner