Home » World News » Do we need an education revolution?

There is a growing clamour in educational circles for a radical overhaul of our schools. From the OECD to educational academics and influential consultancies such as Learning First, there are calls for the "next revolution" in education.

Schooling, it is argued, should cease to be based on the "industrial model" of didactic teaching practices (with an emphasis on rote-learning facts and figures), timetables and classrooms of desks in rows.

Instead, we should emphasise so-called 21st-century skills such as connectedness and tolerance. 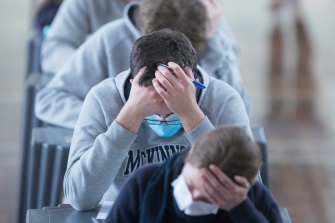 Schooling, it is argued, should cease to be based on the “industrial model” of didactic teaching practices.Credit:Simon Schluter

Why? To prepare pupils for a world of work that globalisation, and now COVID-19, has turned upside down.

This narrative, while powerful, relies on a fallacy; a misunderstanding of the historic mission of Australian schooling.

These days almost every presentation at educational conferences starts in the same way. I know, because before entering Victoria's State Parliament earlier this year I was a teacher.

A slide is projected with a black and white image of desks in rows. Pupils sit behind them, heads bowed and working diligently, as the teacher sits at their desk, seemingly uninterested.

This is the "industrial model". Yet this characterisation of both past and current teaching practices is almost entirely wrong.

Australia inherited its educational model from the British. It was shaped, more than anyone, by Dr Thomas Arnold.

In the midst of the industrial revolution, Arnold – the headmaster of Rugby School – sought to prepare his students for an unknowable future. He decided, in this context, that strong values were the most important asset for young people.

Some may now baulk at Arnold's overt religiosity. Yet strip away his Christian beliefs and his intention was to ensure his graduands faced an uncertain world armed with strong characters and a dedication to their academic studies.

This aim was quickly adopted by other schools, as was the method for its achievement. Pastoral care – the notion that every student should be known and valued – was delivered not only through the house system but also in the classroom, on the sporting field and the stage.

In addition, a broad curriculum ensured pupils were well rounded. Traits such as pluck, risk-taking, empathy and humility were explicitly encouraged.

This is our educational heritage, not some imagined, narrow and authoritarian "industrial model".

There have always been some harsh teachers with little interest in their pupils, teaching dry facts and figures. Yet the idea that until recently the entire school system was thus is demonstrably false.

The attack on the traditional model of schooling is nothing new. In 1942 the Cambridge English teacher Donald Hughes urged caution to the change-makers on the basis that "there is no greater superstition than the cult of the New. It proposes that our ancestors were fools and that our only salvation lies in iconoclasm."

Our teaching ancestors had great wisdom, and our salvation lies not in iconoclasm but in a reclamation of a proud educational heritage.

As the former headmaster of Eton College, Tony Little, has recently said: "The British tradition of holistic, liberal education has been one of the glories of our development as a society – and we must reclaim it."

Dr Matthew Bach is the Liberal member for Eastern Metropolitan Region and a former teacher.

Father-of-three, 55, bedbound in a nursing home after Covid