It’s a ban that even supporters acknowledge will be hard to enforce. Yet 2021 has been a breakthrough year for legislation in several states seeking to prohibit abortions based solely on a prenatal diagnosis of Down syndrome.

Governors in Arizona and South Dakota recently signed such bills into law, and similar measures are pending in North Carolina and Texas. Most significantly, a federal appellate court said Ohio could begin to implement a 2017 law that has been on hold.

Although that ruling by the 6th U.S. Circuit Court of Appeals conflicted with other federal court decisions, anti-abortion activists say it increases the chances that the U.S. Supreme Court will agree to consider a case addressing the challenging issues the legislation poses. That could clear the path for bans to be enacted in some other states where courts are blocking them.

Just this week, the high court – with a 6-3 conservative majority resulting from three appointments by former President Donald Trump – signaled its willingness to reconsider the 1973 Roe v. Wade ruling establishing a nationwide right to abortion. The justices agreed to consider a Mississippi law that seeks to ban abortions after 15 weeks. Roe essentially legalized any abortion taking place before a fetus could survive outside the mother’s womb, generally around 24 weeks. 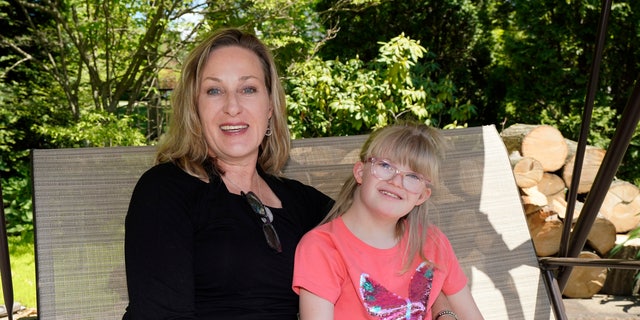 Holly Christensen, left, sits in a swing with her daughter, Lyra, Thursday, May 13, 2021, in Akron, Ohio. Anti-abortion activists say 2021 has been a breakthrough year for legislation in several states seeking to prohibit abortions based on a prenatal diagnosis of Down syndrome. Opponents of the bills, including some parents with children who have Down syndrome like Holly, argue that elected officials should not be meddling with a woman’s deeply personal decision on whether to carry a pregnancy to term after a Down syndrome diagnosis. (AP Photo/Tony Dejak)

Katherine Beck Johnson, a lawyer with the conservative Family Research Council, acknowledged that the Down syndrome laws might be easy to circumvent. Doctors could tell women not to share their specific reasons for wanting an abortion.

“But even if it’s hard to enforce, it’s worth being passed,” she said, “It’s important for a state to show they’re not supporting eugenics; they want to remove the stigma of people who have Down syndrome.”

Opponents of the bills, including some parents with children who have Down syndrome, argue that elected officials should not be meddling with a woman’s deeply personal decision on whether to carry a pregnancy to term after a Down syndrome diagnosis.

“There’s something condescending about these bans, suggesting people don’t have the ability to make their own decisions,” said Holly Christensen, a teacher and newspaper columnist in Akron, Ohio, whose 8-year-old daughter, Lyra, has Down syndrome.

Christensen said she believes that anti-abortion activists’ push for such laws, in hopes of getting a case before the Supreme Court, has undercut efforts to disseminate more information about Down syndrome so more families would be willing to raise children with the condition.

She would like to see Ohio lawmakers increase funding for education and services for children with disabilities.

According to the National Down Syndrome Society, about one in every 700 babies in the United States, or roughly 6,000 annually, is born with the condition, which results from a chromosomal irregularity. There are no official figures on how many prenatal diagnoses of Down syndrome prompt a decision to abort; a 2012 study by medical experts estimated the abortion rate was 67%.

In the past, many children with Down syndrome were institutionalized. Christensen said these days, they frequently acquire job skills and some degree of self-sufficiency. Their life expectancy is more than 60 years, triple the expectation just a few decades ago.

In past years, courts routinely blocked state laws seeking to ban abortion if it was based on a diagnosis of Down syndrome or other fetal anomalies. Trump’s judicial appointments to lower-level federal courts as well as the Supreme Court has altered the legal landscape.

“It feels like the ground is shifting,” said Elizabeth Nash, who tracks state legislation for the Guttmacher Institute, a research group that supports abortion rights.

Nash noted that court rulings already have allowed enforcement of the laws in Missouri, Tennessee and Ohio.

Last month’s decision by a divided 6th Circuit court, which includes six justices nominated by Trump, reversed two earlier decisions that had blocked enforcement of the 2017 Ohio law. Doctors could face a felony charge, be stripped of their medical license and be held liable for legal damages if they are aware of a Down syndrome diagnosis when performing an abortion.

The majority opinion said the Ohio law is aimed at protecting the Down syndrome community from “the stigma it suffers from the practice of Down-syndrome-selective abortions.”

Arizona’s new Down syndrome measure, part of a sweeping anti-abortion bill Republican Gov. Doug Ducey signed last month, is set to take effect later this year. Similar to the Ohio law, it calls for felony charges against doctors who perform an abortion based on a diagnosis of Down syndrome or other genetic abnormalities.

Opponents plan a lawsuit seeking to block it. 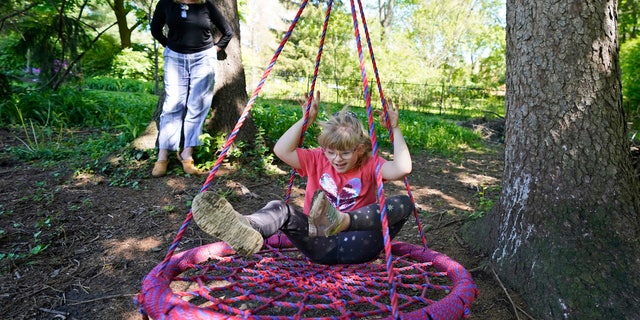 Holly Christensen, left, watches her daughter, Lyra, twirl in a swing, Thursday, May 13, 2021, in Akron, Ohio. Anti-abortion activists say 2021 has been a breakthrough year for legislation in several states seeking to prohibit abortions based on a prenatal diagnosis of Down syndrome. Opponents of the bills, including some parents with children who have Down syndrome like Holly, argue that elected officials should not be meddling with a woman’s deeply personal decision on whether to carry a pregnancy to term after a Down syndrome diagnosis. (AP Photo/Tony Dejak)

Dr. Julie Kwatra, an OB-GYN practicing in Arizona, is among people on both sides of the issue who suggest the law, if it takes effect, would be difficult to enforce.

“Women who want to terminate their pregnancies will do it, whether they do it in a safe, legal way or an unsafe, illegal way,” she said. “It’s still completely legal to terminate your pregnancy for any number of other reasons.”

However, Kwatra said the new measure, by threatening criminalization, “puts a black cloud over the practice of medicine and the doctor-patient relationship.”

Dr. Jamila Perritt, CEO of Physicians for Reproductive Health, said it would be damaging if doctors in states with the Down syndrome laws became defensive in their interactions with patients.

“When you go to see your health care provider, who do you want them to be protecting — your welfare or theirs?” she said.

Cathi Herrod, president of the Center for Arizona Policy, a conservative group that backed the state legislation, said the law will be valuable even if women are free to give another reason for seeking an abortion.

Michael New, an abortion opponent who teaches social research at Catholic University of America, said the laws are a good strategy for the anti-abortion movement even if their enforceability is questionable.

“If these laws are upheld, that would create a precedent that would increase the likelihood that other types of protective pro-life laws would be upheld,” he said via email.

He also suggested the laws could help shape public opinion, drawing attention to the high percentage of abortions in cases of a Down syndrome diagnosis.

Erika Christensen, along with her husband, Garin Marschall, decided in May 2016 to terminate a pregnancy after learning during the third trimester that the fetus likely would be unable to breathe after birth. The couple lived in New York, where abortions were banned after 24 weeks of gestation. They traveled to Colorado, where Christensen had an abortion at 32 weeks.

“All decisions in these cases are necessarily complicated,” said Christensen, who was grateful for the discussions she had with her doctors.

The couple noted that the 6th Circuit decision upholding the law in Ohio implies that patients seeking abortions in similar cases could lie to their doctors about their reasons.

“That is a really dangerous place to go with regard to the law,” Marschall said.

‘I didn’t get any help’: Wesley accused of failing to inform parents, police of teen’s assault