Rome: Thousands of migrants and asylum seekers on Greece's Aegean Islands are to be offered €2000 ($3550) each to return to their countries of origin, in the latest attempt to address the migrant crisis.

The offer by the European Union will be open to up to 5000 migrants living in overcrowded, rubbish-strewn camps on Lesbos, Kos, Chios, Samos and Leros.

The voluntary return scheme will be valid for just one month, so as not to act as an incentive for migrants who are currently in Turkey to try to reach the islands. It is hoped it will help ease tensions on the islands, where refugee facilities have been burnt down and aid workers and journalists attacked by right-wing vigilantes. 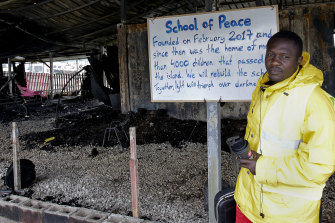 A volunteer music teacher in the burnt facilities of the school for refugee children, part of the “One Happy Family” NGO’s project on the island of Lesbos on March 8, 2020.Credit:Getty Images

There are an estimated 40,000 asylum seekers stuck on the islands, with more arriving from Turkey all the time.

The scheme will be organised by the UN's International Organisation for Migration with the help of Frontex, the EU's border security force. 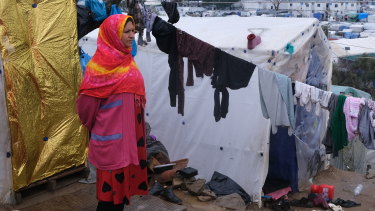 A migrant stands next to their makeshift tent outside the perimeter of the overcrowded Moria refugee camp on the north-eastern Aegean island of Lesbos, Greece.Credit:AP

The initiative is aimed at economic migrants looking for a better life in Europe, rather than refugees fleeing war, and who are judged to have a strong case for requesting asylum.

It was announced by Ylva Johansson, the EU home affairs commissioner, who said the islands were confronting "a very challenging situation".

"We have now agreed a special, temporary scheme to be carried out. For one month we will open the opportunity for migrants on the Greek islands to sign up for voluntary returns and give them €2000 each to help them reintegrate in their countries of origin. It is an opportunity to release the pressure a bit on the islands."

Earlier this month, the EU pledged to give €700 million to Greece to handle the refugee crisis, dubbing the country "Europe's shield".

The voluntary return scheme will only be open to migrants who arrived on the islands before January 1.

That excludes the refugees and migrants who have flooded into Greece in the past two weeks, after Turkish President Recep Tayyip Erdogan said he would no longer block them from trying to cross to Europe. His decision has led to clashes between Greek police and refugees on the Turkish border, with three reported migrant deaths.

Family offer £1.5million barn conversion with stables for £5 in raffle after it failed to sell in coronavirus pandemic