Hordes of commuters on electric scooters are still putting themselves at risk at the exact spot where TV presenter Emily Hartridge died one year on from her death.

The YouTube star was riding her electric scooter on a busy roundabout when she was hit by a lorry and killed a year ago today.

The former Channel 4 presenter, 35, was the first person to die in the UK in an accident involving an e-scooter – leaving behind her devastated family and boyfriend. 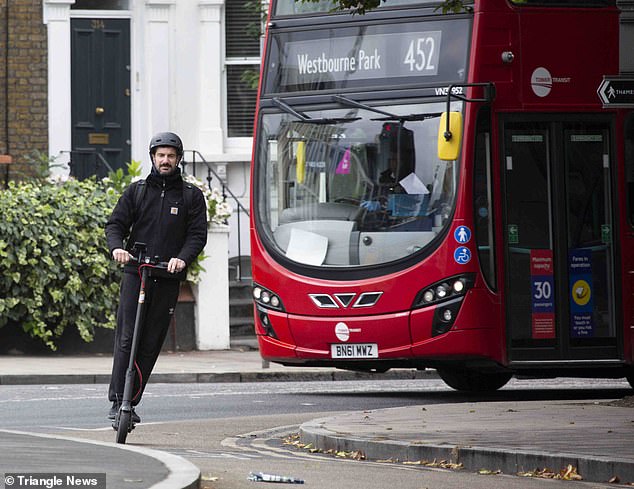 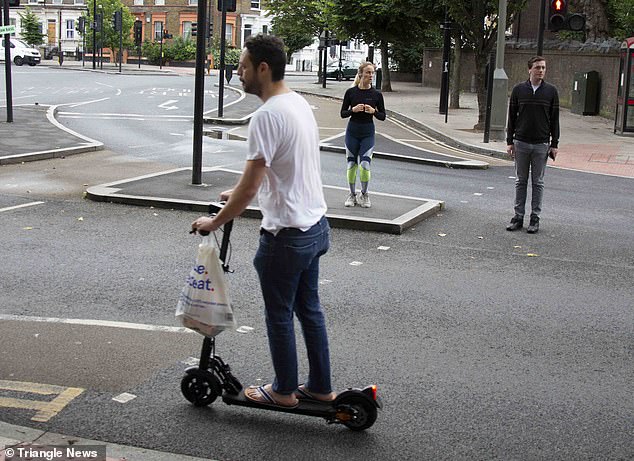 A man in T-shirt and jeans rides an electric scooter in his flip flops without wearing a helmet. He is clutching a Tesco carrier bag on the handlebars

Alarming photos show a man in a T-shirt and jeans with no helmet. He’s clutching a Tesco carrier bag on the handlebars.

When he stopped at traffic lights, he can be seen wearing flip flops.

A man and a woman – both wearing helmets – were snapped riding side-by-side on the pavement, despite it being illegal to ride them on paths.

Another man on an e-scooter dressed all in black zooms around a double-decker bus. 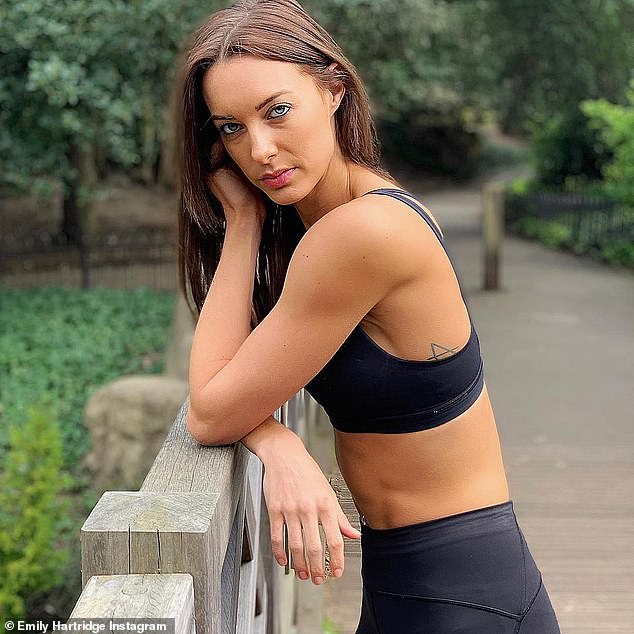 Emily Hartridge was riding her electric scooter on a busy roundabout in Battersea, south west London, when she was hit by a lorry and killed a year ago today 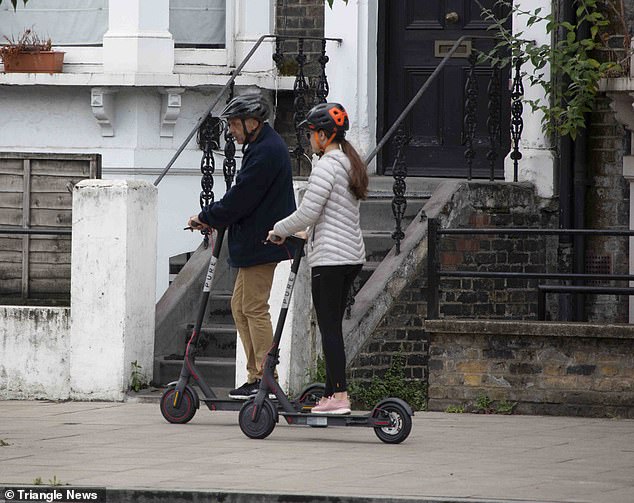 A young man with his hood up wearings a cap instead of a helmet as he zips between cars, including a red 4×4 right behind him.

These pictures were taken between 6am and 9am on Friday, showing the growing number of people who are turning to electric scooters to get around, despite the risks.

The Government made it legal to ride rental e-scooters on roads in Great Britain on July 4 in pre-approved locations. 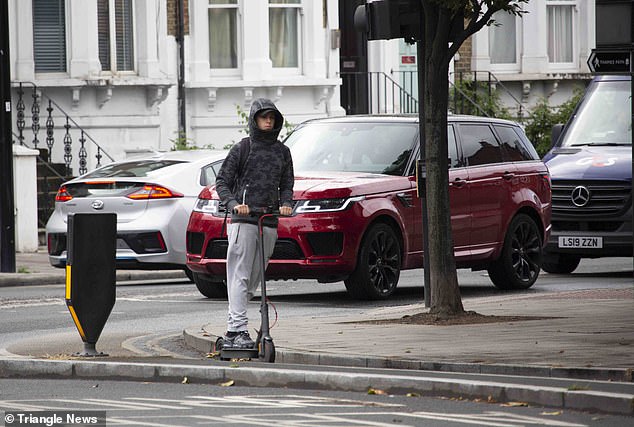 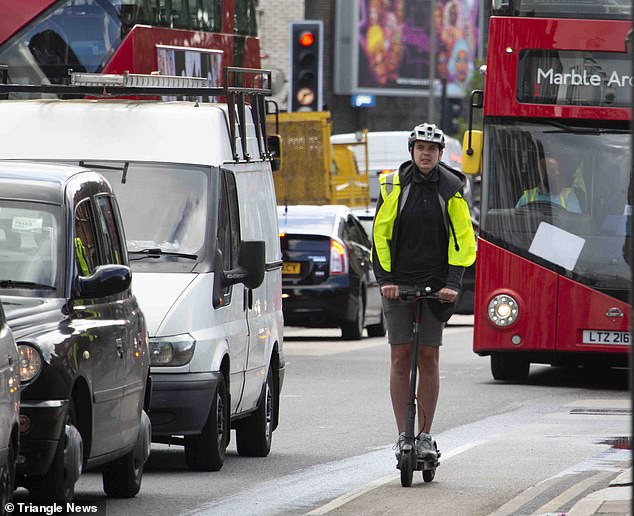 A man wearing shorts, a high-visibility jacket and a helmet rides his e-scooter in front of a bus 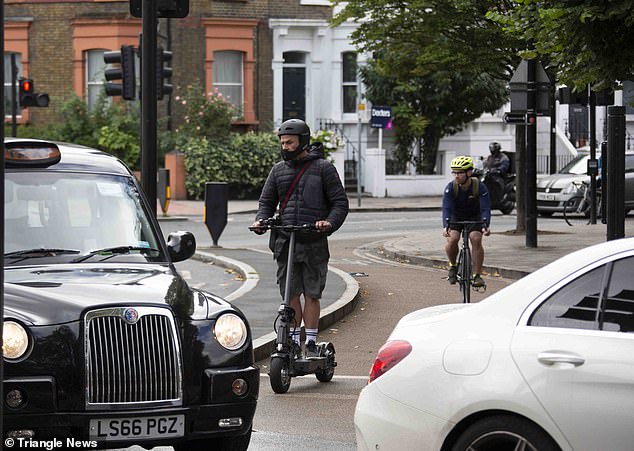 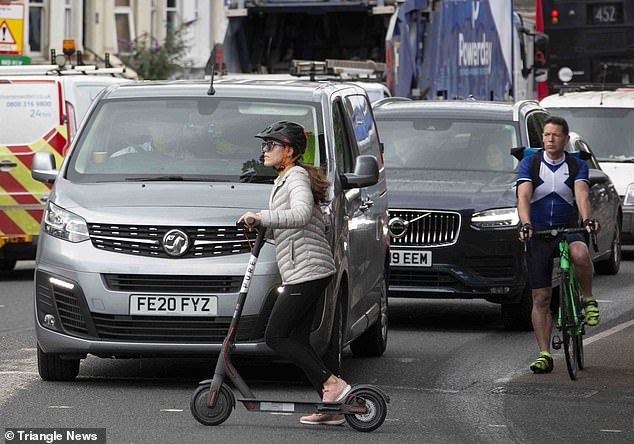 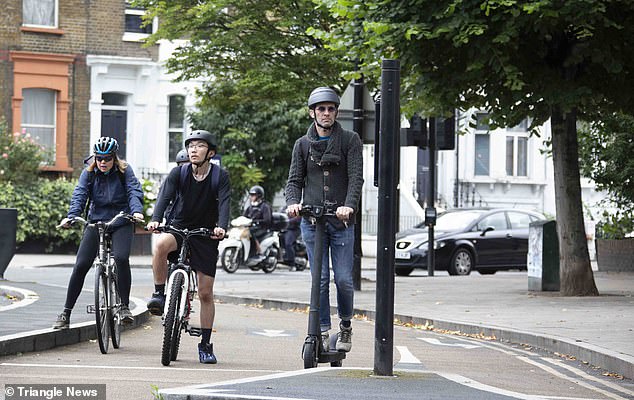 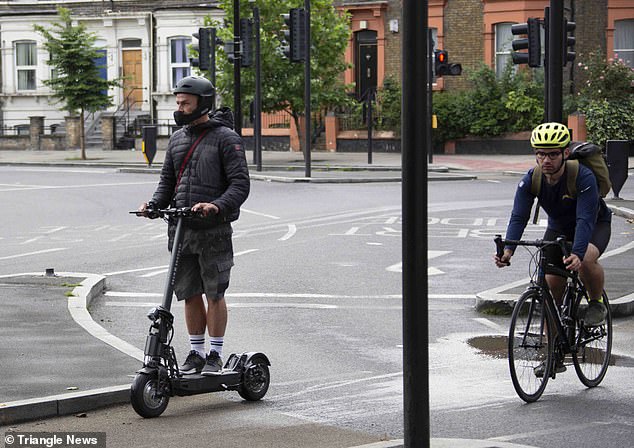 It remains illegal to ride e-scooters on the pavement or a privately-owned one on roads and cycle lanes.

Ms Hartridge’s hugely popular ’10 Reasons Why*’ Youtube videos got up to three million hits a month and helped her land TV presenting roles, such as for 4OD’s Oh Sh*t I’m 30.

Her bereaved boyfriend Jack Hazell said she was on her way to a fertility clinic when she was hit by the lorry, no one was arrested over her death.

A 14-year-old boy was left in a critical condition just a day after Ms Hartridge’s accident after he was believed to have lost control on his e-scooter.

He was riding it on the pavement and crashed into a bus stop, suffering a serious head injury, in Beckenham, South London.

Where can I ride an e-scooter?

The Government said that riding rental e-scooters on the roads and cycle paths will become legal on July 4.

However, riding these scooters on pavements will remain illegal and will only be allowed in pre-approved locations where the hiring scheme is taking place.

It will still be illegal to ride privately-owned electric scooters on the pavement, roads and cycle paths.

You can only ride your own e-scooter on private land, with permission from the person who owns the land.

They will be limited to a maximum speed of 15.5mph and it’s recommended that riders wear a helmet, though it isn’t mandatory.

Privately-owned e-scooters cannot be legally ridden on the roads because they don’t always have visible rear red lights, number plates or signally ability.

They are treated the same as motor vehicles because they are classified as Personal Light Electric Vehicles (PLEVs).

This means they are subject to the same legal requirements as other motor vehicles and must therefore have MOT, tax, licensing and specific construction.

Orphaned boy, 8, calls out for mum after she is ‘tortured and murdered by her jealous ex because she broke up with him’