San Francisco: The mayor of San Francisco announced a legal state of emergency on Thursday, Washington-time, over the growing number of monkeypox cases, allowing officials to mobilise personnel and resources and cut through red tape to get ahead of a public health crisis reminiscent of the AIDS epidemic that devastated the city.

The declaration, which takes effect on Monday, was welcomed by gay advocates who have grown increasingly frustrated by what they called San Francisco’s lacklustre response to a virus that so far has affected primarily men who have sex with men, although anyone can get infected. 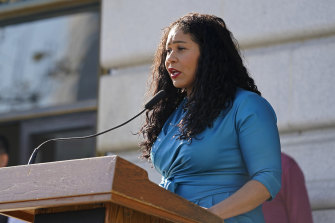 The city has 261 cases, out of about 800 in California and 4600 nationwide, according to the San Francisco Department of Public Health. A national shortage of vaccine has resulted in people waiting in line for hours for scarce doses, often to be turned away when the shots run out.

“San Francisco is an epicentre for the country. Thirty percent of all cases in California are in San Francisco,” said San Francisco Public Health Officer Dr. Susan Philip.

San Francisco shut down its primary monkeypox vaccination clinic earlier this week after it ran out of doses, saying it had only received 7800 doses of a requested 35,000.

“San Francisco was at the forefront of the public health responses to HIV and COVID-19, and we will be at the forefront when it comes to monkeypox,” said state Senator Scott Wiener, a Democrat who represents San Francisco. “We can’t and won’t leave the LGTBQ community out to dry.” 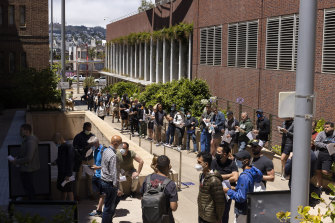 US health officials said the monkeypox outbreak can still be stopped, despite rising case numbers and so-far limited vaccine supplies.

The Biden administration’s top health official pushed back against criticism about the pace of the response and worries that the US has missed the window to contain the virus, which has been declared a global emergency.

“We believe we have done everything we can at the federal level to work with our state and local partners and communities affected to make sure we can stay ahead of this and end this outbreak,” Xavier Becerra, head of the Department of Health and Human Services, told reporters on a call.

But he added that local health officials “must do their part. … We don’t have the authority to tell them what to do.”

The pushback from federal leaders came as they announced distribution plans for 780,000 shots of the two-dose Jynneos vaccine. The doses will be allocated to states, cities and other localities based on their case numbers and the size of their populations that are considered high-risk for the disease.

Becerra said the federal government has done its job and said the onus is now on local officials to use the tools available.

“We’ve made vaccines, tests and treatments well beyond the numbers that are currently needed available to all jurisdictions,” he said.

But one representative for specialty health clinics said Becerra’s comments showed a “lack of understanding for the full breadth of this crisis”.

“Clinics around the country are pleading with federal health officials for the information, supplies and staffing they need to successfully bring an end to this outbreak,” said David C. Harvey, executive director of the National Coalition of STD Directors, in a statement. The group is pressing for $US100 million in emergency funding for local health departments and clinics.

There were more than 4600 reported monkeypox cases in the US as of late Wednesday, according to the CDC, and federal officials expect those numbers to rise.

More than 99 per cent of reported cases are in men and the vast majority of those are among men who reported sexual contact with other men, though health officials have stressed that anyone can catch the virus.

The US is now capable of testing 60,000 to 80,000 people per day, though Becerra said daily testing numbers are well below that.

The monkeypox virus mainly spreads through skin-on-skin contact, but it can also transmit through touching linens used by someone with the infection. People with monkeypox may experience fever, body aches, chills and fatigue. Many in the outbreak have developed sometimes-painful zit-like bumps.

The US has ordered 5.5 million more vaccine doses for delivery by mid-2023 and has rights to raw ingredients that could make 11.1 million more doses. U.S. officials said a massive vaccination campaign could still be avoided if communities and individuals take measures to avoid spread.

Harry Potter author JK Rowling buys her £400,000 childhood home complete with trapdoor and cupboard under the stairs – The Sun

Christian Porter urges return to office as soon as possible