Home » World News » Everything you need to know about the coup, massacres and fighting in Myanmar 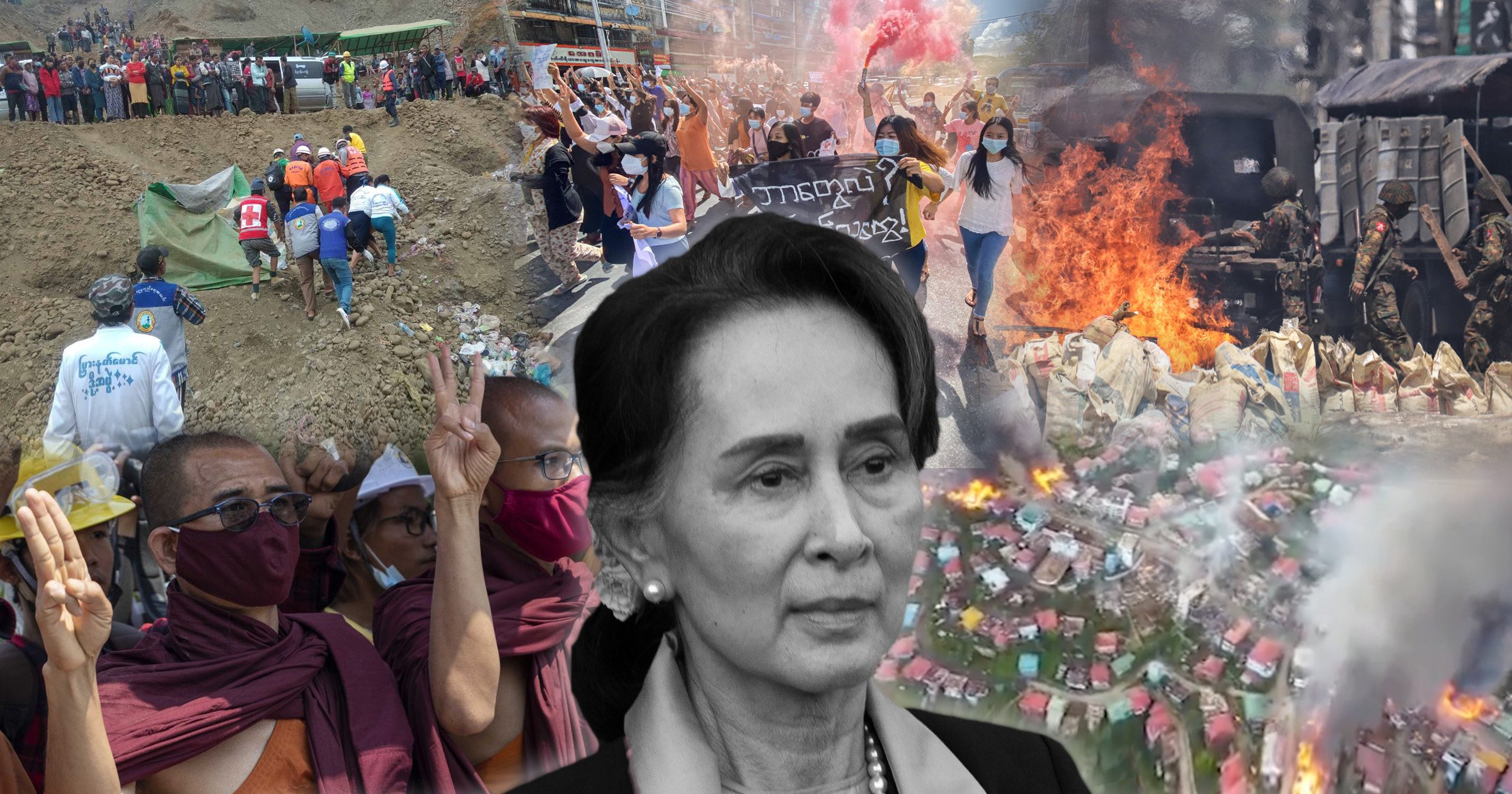 Horrific stories of massacres, murder and countless acts of violence in Myanmar made headlines throughout the whole of last year.

The military, dubbed the junta by locals, took over the country in February – after almost a decade of quasi-democracy – and now the nation is on the brink of civil war.

Ruling soldiers have long been accused of committing heinous crimes against their own people, but a recent investigation concluded the armed forces are torching and massacring entire villages.

This is likely a response to the growing guerilla units called the ‘People’s Defence Forces’ (PDF) which are springing up to fight the junta.

But a lot has happened to bring Myanmar to this point, so here is some context.

Myanmar before the coup:

The junta had control of the nation from 1962 to 2011, when leading soldiers were pushed to introduce political reforms including parliamentary elections.

The National League for Democracy (NLD), headed by Aung San Suu Kyi, was elected in 2015.

The NLD won again in early 2021 – gaining 83% of parliament’s seats – but the junta said the election was fraudulent. The election commission said it found no evidence of this.

Nevertheless, this is what sparked the coup – from a military which has managed to hold onto significant power throughout civilian rule.

The junta detained NDL members, including Ms Suu Kyi who was later sentenced to four years in prison for incitement and violating Covid rules.

They suspended telephone and internet access and declared a year-long state of emergency.

Military commander-in-chief Min Aung Hlaing promised his soldiers were on the side of the people and wanted a ‘true and disciplined democracy’ for Myanmar.

He said a ‘free and fair’ election will be held after the state of emergency is over.

Those joining the movement were so certain they would be injured that they wrote their names and blood types on their hands.

More than 106 demonstrators, including children, have been killed by police with all the violence prompting the UK to join other countries in putting sanctions on Myanmar for ‘human rights violations’.

But reports of brutality have only gotten worse as resistance has moved from traditional civil disobedience to guerrilla tactics.

The junta has a reputation for resorting to particularly cruel methods to quash democracy movements.

Thousands of peaceful monks rose up against the military in 2007, but many of them were shot. Similar scenes took place in 1988.

Last year was no different as civilians started forming PDF units to fight the junta directly.

Drone footage shot by Chin Human Rights Organization in October and December shows fires raging inside buildings and charred churches, collapsed schools and ruined homes in the town of Thantlang.

The town, in the state of Chin, has seen intense fighting over the last four months and it is now completely empty, according to the organisation.

More than 580 of the area’s buildings have been burned since September alone, Maxar Technologies satellite imagery shows.

One Chin refugee, now in India, told how the military killed her cousin and then left his body in the street. She claims she noticed a bomb left under the body.

She said: ‘When they moved the body, the mine went off and the body was in pieces. We didn’t get back a body, instead we had to collect pieces.’

This is according to human rights monitoring groups but the number is expected to be much higher in reality as reporting is suspected of being hindered by the military.

Who is Aung San Suu Kyi?

Ms Suu Kyi, the only civilian leader Myanmar has ever had, was awarded the Nobel Peace Prize in 1991 for her pro-democracy fight against military rule then.

But she faced a drastic fall from grace when the world learned how Myanmar treats its Rohingya Muslim minority.

Myanmar considers the community illegal immigrants and refuses to grant them citizenship.

Armed forces, under Ms Suu Kyi, have been accused of committing genocide in 2017 – when a clearance operation forced more than 700,000 people to flee to neighbouring Bangladesh.

The operation allegedly included killings, mass rapes and the torching of homes.

Ms Suu Kyi represented Myanmar at the Hague in 2019, where she denied charges of ethnic cleansing.

She was detained during the coup and is now serving her prison sentence. All five of her lawyers have been banned from speaking to the media, with the junta saying they could ‘destabilise the country’.

How has the rest of the world reacted?

The coup has been condemned by most, if not all, of the western world, with US Secretary of State Antony Blinken calling it a ‘reign of terror’.

‘We, alongside our international allies will hold the Myanmar military to account for their violations of human rights and pursue justice for the Myanmar people.’

But the country went on to support calls for Ms Suu Kyi to be released and a return to democracy.

Other Southeast Asian countries have been working to find diplomatic solutions for Myanmar.