Ex-Bishop of Chester sexually abused 18 victims including children before his death in 1987 whose ‘appalling’ suffering was made worse by church’s ‘poor’ response when they revealed what happened, damning report finds

A bishop used his position in the church to commit ‘appalling’ acts of sexual abuse against children and vulnerable adults over a period of 15 years, a report has found.

The former Bishop of Chester, Hubert Victor Whitsey, allegedly abused at least 18 people between 1966 and 1981, whose suffering was then made worse by the ‘poor’ response of church officers.

The disclosures from victims were found to have been mishandled by Church of England officials up until 2012, according to the independent investigation.

Whitsey, who died in 1987, ‘groomed his victims, and often their families to enable this abuse’ according to the report’s authors – retired judge David Pearl and Kate Wood, a former detective inspector with the Sussex Police. 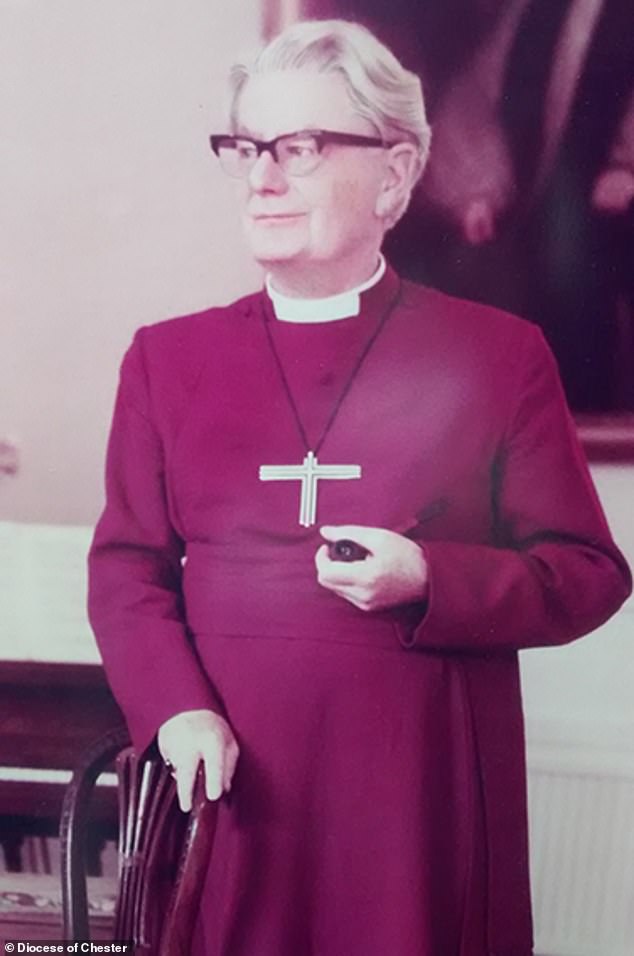 The former Bishop of Chester, Hubert Victor Whitsey (pictured), allegedly abused at least 18 people between 1966 and 1981, whose suffering was then made worse by the ‘poor’ response of church officers

They said that their findings will make ‘deeply uncomfortable reading for the church’ as they concluded the victims’ ‘appalling’ suffering was ‘clearly made worse by the poor response of church officers at different times when they had the courage to come forward’.

Their statement read: ‘He used his position in the church to abuse both prospective ordinands, and children and young persons, many of whom were particularly vulnerable as they were experiencing personal family difficulties, such as the death or departure of a parent.’

The current Bishop of Chester said he felt ‘horror and shame’ at the findings. Mark Tanner said: ‘Our apologies, which are freely and sincerely given, must be backed up by action. 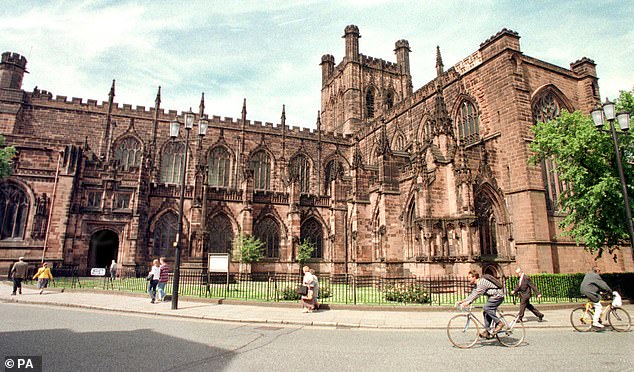 ‘I am grateful to all those who have already helped us start to change, to Judge Pearl for this report, and most of all to the incredibly brave survivors who have spoken up and made us listen.’

An apology has also been offered by Archbishop of York, Stephen Cottrell.

In January 2016, an adult male disclosed to a vicar that he had been indecently assaulted by Whitsey as a child in the early 1980s. The diocesan safeguarding adviser (DSA) was immediately informed.

In addition to offering pastoral support to the complainant, she alerted the Bishop of Chester, Peter Forster (who said he ‘had little more to do with the matter’) and referred the case to the National Safeguarding Team.

The complainant also stated that he had disclosed his abuse to Bishop Forster in 2002. He was offered counselling but said that no further action was taken.

Bishop Forster had a ‘vague memory of somebody … saying that Victor Whitsey had put his arm around him’. He said that this ‘didn’t register at the time’ because Whitsey ‘did have a reputation for odd behaviour, in general’.

Among sex abuse cases to recently trouble the Church was that of former bishop Peter Ball, jailed for 32 months in 2015 for sex abuse against boys carried out over three decades

Bishop Forster did not make any written record or undertake any additional enquiries.

This was contrary to the Church of England’s Policy on Child Protection (1999), which stated that the recipient of an allegation of abuse ‘must keep detailed records of their responses’, including ‘the content of all conversations… all decisions taken and the reasons for them’.

In July 2016, the DSA received disclosures from two further males who alleged that Whitsey had sexually abused them as children, between 1974 and 1981.

‘Bishops have too much power and too little accountability’: Lawyers for 20 victims of CoE child sex abuse demand ‘huge change’

Richard Scorer, Slater and Gordon’s lead lawyer at the Inquiry, said ‘bishops have too much power and too little accountability’.

He demanded ‘huge change’ including ‘proper support for survivors and removing Bishops’ operational responsibility for safeguarding’.

Mr Scorer said: ‘This is a very damning report. It confirms that despite decades of scandal, and endless promises, the Church of England continues to fail victims and survivors. Bishops have too much power and too little accountability.

‘National polices are not properly enforced. Sexual offending by clergy continues to be minimised. It’s clear from the report that huge change is still required, including proper support for survivors and removing Bishops’ operational responsibility for safeguarding.

‘To make change happen, we also need mandatory reporting and independent oversight of church safeguarding. It is imperative that IICSA recommends these in its final report next year.’

Andrew Lord, a solicitor for Leigh Day representing an alleged victim of abuse within the church, said: ‘The report makes clear just how significant an issue abuse within the Anglican Church has been.

‘The recommendation that bishops do not hold operational responsibility for safeguarding is welcomed, given that in the past there were offerings of public support to offending clergy such as to Bishop Ball.

‘The above will, of course, need to be adequately funded. The report notes that there has been a significant increase in funding of safeguarding activities since 2015, but that this began from a very low base.

‘Some survivors may be pleased to see the condemnation brought by IICSA’s report, but others may believe that more measures should be implemented to ensure that safeguarding failures of the past will not continue into the future.’

She informed Cheshire Constabulary, which subsequently commenced an investigation – Operation Coverage. It focussed on incidents between 1974 and 1982, during Whitsey’s time as the Bishop of Chester. It identified a further 10 potential victims, including teenagers and young adults of both sexes.

The Church of England first apologised in 2017, after a police investigation was launched into Whitsey.

Then-Archbishop of York, Dr John Sentamu and then-Bishop of Chester, Dr Peter Forster said: ‘Sexual abuse is a heinous crime – and is an absolute and shameful breach of trust.

‘We acknowledge that for survivors, the effects of sexual abuse are lifelong.’

In 2017, police admitted the former bishop would have been part of an investigation into child sexual abuse had he still been alive.

Assistant Chief Constable at Cheshire Police Nick Bailey said at the time: ‘Following a thorough investigation and taking into account all of the information available, it has been established that, if Bishop Whitsey were alive today, as part of the investigation process he would have been spoken to by police.

‘This would have been in order to outline the details of the allegations made and to provide him with an opportunity to offer an account of events.’

One of the alleged victims, in a statement released through law firm Slater and Gordon, said he was ‘young, innocent, and naive’ when the bishop abused him ‘sexually and psychologically’, leading to a suicide attempt.

It comes after the Independent Inquiry into Child Sexual Abuse (IICSA) found that nearly 400 people who were clergy or in positions of trust associated with the Church have been convicted of sexual offences against children from the 1940s to 2018.

In the past year there were 2,504 safeguarding concerns reported to dioceses about children and vulnerable adults, and 449 concerns about recent child sexual abuse.

However, the Inquiry into whether the Church of England and the Church in Wales protected children from sexual abuse in the past found that both institutions ‘failed’ to take reports of abuse seriously for the best part of eight decades.

Its scathing report found that ‘many allegations were retained internally by the Church, rather than being immediately reported to external authorities’ as a culture of secrecy, deference, tribalism and naivety allowed abusers to hide.

Responses to disclosures of sexual abuse ‘did not demonstrate the necessary level of urgency, nor an appreciation of the seriousness of allegations’, the report stated.

It found ‘non-recent sexual abuse allegations’ were ‘overlooked’ due to a ‘failure to understand that the passage of time had not erased the risk posed by the offender and a lack of understanding about the lifelong effects of abuse on the victim’.

Meanwhile, alleged perpetrators were given more support than victims of sex abuse while those who reported the abuse were ‘actively disbelieved’ by the Church.

Citing the case of former bishop Peter Ball, the Inquiry suggests that ex-Archbishop of Canterbury Lord George Carey ‘simply could not believe the allegations against Ball or acknowledge the seriousness of them regardless of evidence’.

The report added that Carey was ‘outspoken in his support of his bishop’ and ‘seemingly wanted the whole business to go away’.

It recommended overhauling CoE safeguarding, including stripping bishops of their powers to investigate and punishing Church members accused of child sex abuse.

In a written statement to Parliament, Home Secretary Priti Patel said the Government would review the report and ‘consider how to respond to its content in due course’.

The IICSA is investigating claims against local authorities, religious organisations, the Armed Forces, public and private institutions, and people in the public eye.

Following the death of BBC presenter Jimmy Savile in 2011, hundreds of people came forward to say he had abused them as children.

It was established in 2015, following claims from a complainant known as ‘Nick’ of a murderous Westminster paedophile ring connected to Parliament.

Nick, whose real name is Carl Beech, was later discredited and jailed for 18 years for what a judge called his ‘cruel and callous’ lies.