The UK’s coronavirus epidemic could spiral out of control if people wait for the death toll to rise before changing their behaviour, a leading scientist has warned.

Professor Graham Medley, a disease expert at the London School of Hygiene and Tropical Medicine, said people risk making the outbreak worse by refusing to take it seriously early on.

Officially only 590 people in the UK have been diagnosed with the coronavirus but the Government says the true number is between 5,000 and 10,0000.

Ten people have died so far – all in their sixties or older, which are the most at-risk age groups – but Prime Minister Boris Johnson warned many more will die.

Professor Medley told BBC Newsnight that it will be too late to start reacting when the death toll begins to soar, because the virus will already have been spreading for a month. 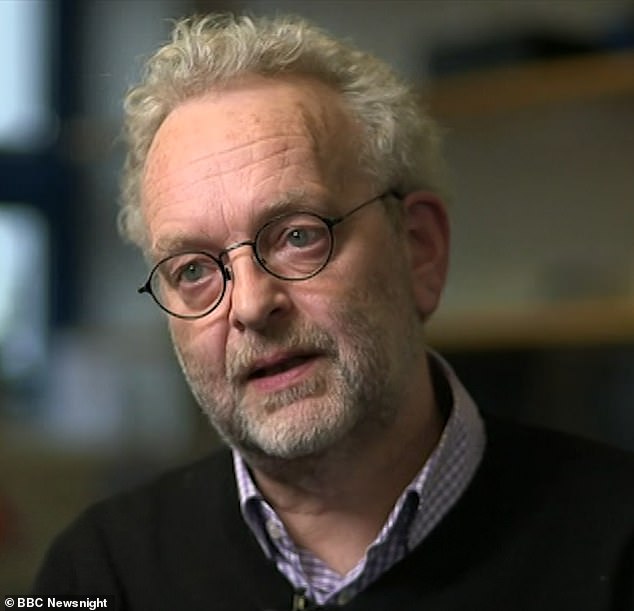 Professor Graham Medley, from the London School of Hygiene and Tropical Medicine, said on BBC Newsnight yesterday that people should start acting as though they already have the coronavirus and don’t want to spread it, rather than acting like they don’t want to catch it 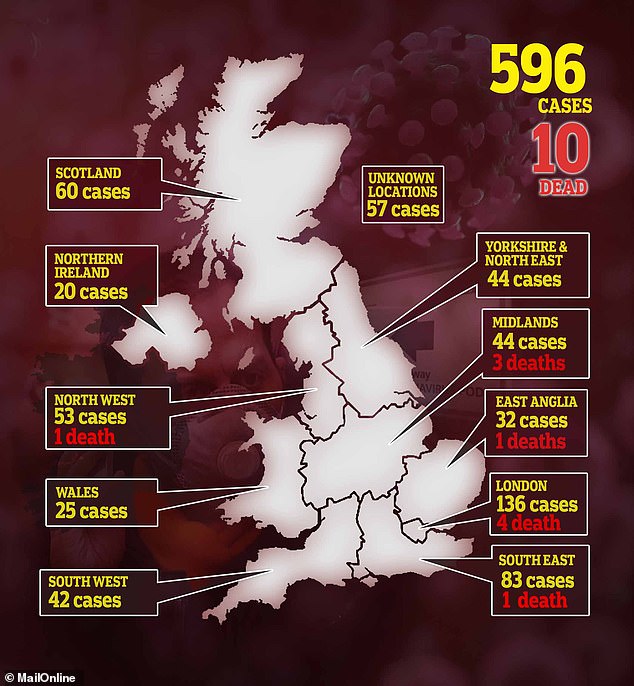 At least 596 people in the UK have already been diagnosed with the coronavirus, and 10 have died, but Government officials said the true number of cases is probably between 5,000 and 10,000

Professor Medley told Newsnight: ‘One of the problems that we’re already facing is the fact that our main source of data is deaths, unfortunately.

‘But those deaths happen about a month after the first infection.

‘One of our concerns, though, is that this delay between infection and death, of about a month, is going to cause us problems if people don’t change their behaviour until they start to see deaths become very big.

The UK’s current epidemic began around February 28, when the number of cases rose from 15 to 20 and the World Health Organization admitted the virus was spreading inside Britain.

By Professor Medley’s logic, therefore, the UK can expect to see a surge in the number of deaths by the end of March.

If people don’t act until then, the virus will already have spread through a significant section of the population, he said.

The Government has upgraded its efforts from the ‘Contain’ to the ‘Delay’ stage of the coronavirus action plan.

Prime Minister Boris Johnson said on Thursday that even people who develop even minor symptoms similar to those of the coronavirus – a cough or a fever – should self-isolate at home; over-70s should not to go on cruise ships; international school trips should be cancelled; and officials are considering more drastic steps like cancelling large events.

Future efforts in the Delay phase could include school closures, encouraging people to work from home and preventing large public gatherings such as football matches or the London Marathon.

The efforts would be added on to the ‘Contain’ efforts, which revolve around testing and isolating suspected cases and a public information campaign which launched last week and is urging people to wash their hands more often.

Other efforts from the Contain phase, such as isolating people confirmed to have the virus and updating travel and health advice, will be continued.

Controversially, the British Government appears to be pursuing a policy of ‘herd immunity’ in which it wants to allow a majority of the healthy population to catch the virus in a controlled manner.

The aim is that so many people will recover from the virus and build up a tolerance to it that it won’t be able to spread quickly in the future.

More dramatic plans down the line are expected to focus on protecting the elderly and people with long-term health problems, who are at risk of dying from the illness.

Professor Medley said his ideal way to process the outbreak would be to quarantine all vulnerable people in the north of Scotland and push everyone else into Kent and ‘have a nice big epidemic’ there so people could get it over with and become immune to virus, then bring society back together.

Admitting that was not possible, he said slowing down the outbreak and spreading cases out over a long period of time would be the best way to handle it.

Asked what his simple message to the public would be, he told the BBC: ‘Most people have a fear of acquiring the virus.

‘I think that a good way of doing it is to imagine that you do have the virus and change your behaviour so that you’re not transmitting it.

Prime Minister Boris Johnson yesterday announced that the UK has moved into the second phase of its coronavirus action plan – the ‘Delay’ phase.

In a step change in official advice, Mr Johnson said that anyone in the UK who gets a new cough or fever should stay at home in isolation for at least a week.

Over-70s have been urged to stop going on cruise ships, which can incubate virus outbreaks, and schools should stop taking their students abroad.

Officials stopped short of telling people not to go to large events or to stop travelling, and refused to close schools or ban big crowds.

These precautions could come into force later on in the outbreak when more people in the country are infected.

The strategy is focused on moving towards a longer but less severe outbreak and pushing the peak – when the most people are infected – into late spring or summer when there is less pressure on the NHS.

Hospitals are already under immense strain, particularly in the winter, and their staff and experts have warned they will be completely overloaded if coronavirus cases explode now.