Wellington: Soldiers and police in the Pacific nation of Fiji have surrounded and locked down a major hospital, after a patient died of COVID-19.

Health authorities said they were quarantining 400 patients, doctors, nurses and other staff within the compound until they could determine who had contact with the coronavirus patient.

The 53-year-old at Lautoka Hospital was only the third person to die from the virus in Fiji, which has about 1 million people. But the nation’s leaders are deeply worried that the latest outbreak is spreading, especially after two doctors at the hospital tested positive for COVID-19. 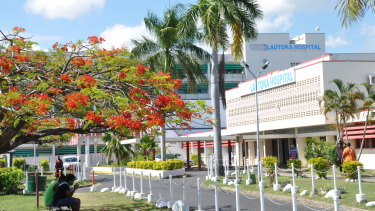 The Lautoka Hospital in Fiji is one of two hospitals managed by Canberra company Aspen Medical under a 23-year partnership the company has entered into with the Fijian government.Credit:Aspen Medical

Dr James Fong, the permanent secretary for health, said the hospital was closed and all medical services were being diverted to other facilities. He said those sequestered in the hospital would be provided with food, bedding and whatever other supplies they need.

Authorities say there are currently 28 cases of community transmission in the country. They have restricted movement in six so-called containment areas, including the capital, Suva.

Fiji’s health system is ill-equipped to deal with a major outbreak.

“Right now, we are in a war with this virus and the frontline has just extended to Lautoka Hospital,” Fong said. “This will be the greatest test our healthcare system has ever faced – it will be a test for all of us. Lives are at stake, sacrifices must be made, and every Fijian’s commitment is needed. The virus is insidious, it is unrelenting.”

Lautoka Hospital is one of two managed by Canberra-based Aspen Medical under a two-decade public-private partnership with the Fijian government.

Back in the WHO, US will pay $US200 million in overdue fees