Baghdad: Dozens of COVID-19 patients have died in an Iraqi hospital, a local official said, after a blaze ripped through an intensive care ward.

Iraq’s coronavirus caseload is spiking, and the victims, officials said, were being treated for life-threatening symptoms. Early reports suggested that the fire at Baghdad’s Ibn Khatib hospital began on Saturday (Iraq time) in an area used for storing oxygen canisters before engulfing a ward of patients barely able to breathe and unable to move. 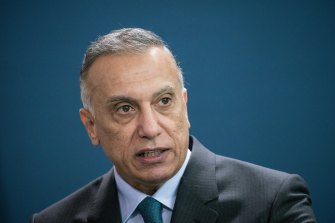 Iraq Prime Minister Mustafa al-Kadhimi has called for an investigation into the fire.Credit:AP

As video footage of the blaze spread across social media, Iraq’s health ministry issued no statement and did not respond to phone calls for comment.

Iraq’s Prime Minister, Mustafa al-Kadhimi, issued a statement early on Sunday calling for an investigation into the cause of the fire.

Iraq’s health system was on its knees before the coronavirus pandemic began, gutted by decades of corruption, mismanagement and underfunding. In interviews Saturday, doctors described remarkable pressures: Some said they had faced pressure to return to work in their understaffed wards, despite a positive coronavirus diagnosis; several said that they had feared for patients they treated in rundown wards where electricity cables visibly sparked from the ceiling.

In the hours after the blaze, it was unclear how the fire began.

A doctor in the hospital who spoke on the condition of anonymity, fearing reprisals from his employer, said that oxygen canisters were stored haphazardly, with little apparent concern for safety. Describing the scene in the intensive care unit early Sunday, the doctor said the walls were “black as coal.”

“I can’t imagine the misery people suffered here,” the doctor said. “They couldn’t breathe without machines, and yet the fire came to them.”

“They couldn’t move,” he said. “Locals rushed to the hospital to try and rescue people.”

Video footage from the area showed smoke billowing from the hospital’s windows as a frustrated crowd watched from below.

Iraq’s health ministry said Saturday that almost 7000 people had been diagnosed with coronavirus the previous day, one of the highest infection rates on record here. Although Iraq has received numerous vaccines, through government purchases and foreign donations, demand for the shots remains sluggish.

Health experts say the suspicion is partly a result of pervasive distrust in medical institutions after decades of government failure. Throughout the pandemic, they say, Iraqi authorities have also undermined public confidence in the safety of vaccines and the distribution process.

In a video from outside Ibn Khatib hospital Saturday night, shared on social media, a man screamed hoarsely against the noise of the crowd as flames shot from the building behind him. “People died, people burned,” he bellowed as his voice almost gave out. “Oh God, please help them.”

Drunken British GP, 45, avoids being struck off after assault