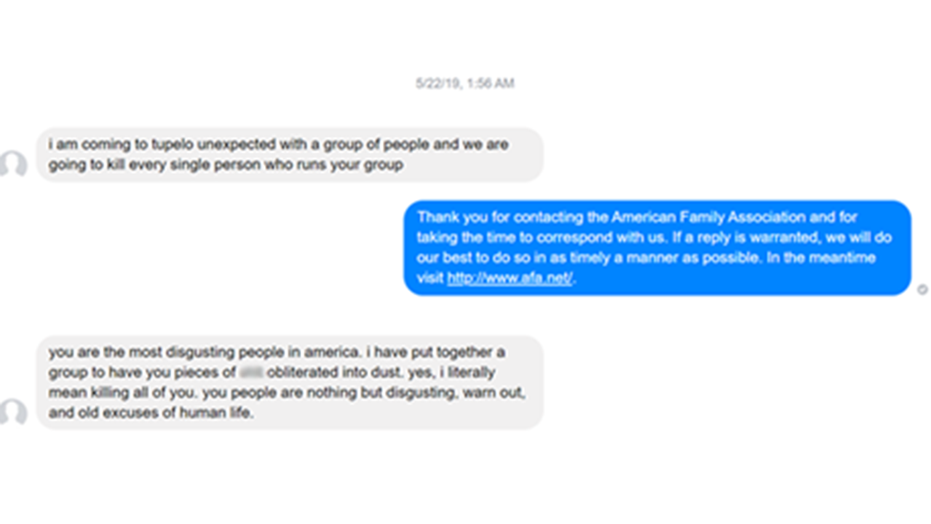 Amazon, Facebook, Apple and Google will testify before a House committee amid questions about competition and free speech; Griff Jenkins has the details from Washington.

A Florida man was sentenced to federal prison on July 20 for posting death threats, including "i literally mean killing all of you," against employees of a prominent conservative Christian organization.

The American Family Association (AFA), based in Tupelo, Miss., said it alerted Facebook of the threats from Chase Davis, 21, of Pompano Beach, but "was told that the threat was not a policy violation."

U.S. District Judge Sheri Polster Chappell sentenced Davis, who pled guilty on Nov. 27, 2019, to six months in prison, and to serve 400 hours of community service, pay $1,440 in restitution to AFA, and serve a three-year term of supervised release.

Davis sent two threatening messages to AFA on May 22, 2019, on Facebook Messenger: 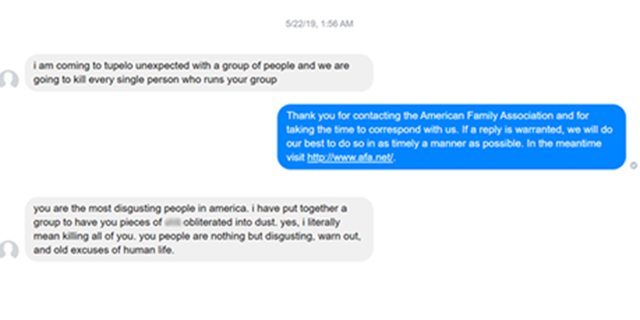 “i am coming to tupelo unexpected with a group of people and we are going to kill every single person who runs your group," he wrote, followed by:

“you are the most disgusting people in america. i have put together a group to have you pieces of [expletive] obliterated into dust. yes, i literally mean killing all of you. you people are nothing but disgusting, warn out, and old excuses of human life.”

AFA, which advocates for traditional family values and was listed as a "domestic hate group" by the Southern Poverty Law Center, also immediately reported the criminal threats to the United States Attorney's Office. The report resulted in an investigation by the FBI and a federal grand jury indictment in the Northern District of Mississippi in the summer of 2019.

Although Facebook’s “community standards” say the Silicon Valley-based tech company protects its users from “hate speech, credible threats, or direct attacks on an individual or a group,” the AFA said the site failed to act on their behalf in this case. Facebook did not immediately respond to a request for comment.

TRUMP JR. BASHES TWITTER OVER SUSPENSION: 'THIS NEVER HAPPENS TO … THE LEFT. IT ONLY HURTS CONSERVATIVES'

“AFA is grateful for the protective services provided by our federal law enforcement and court system over this threat to the employees of our organization,” AFA Senior Vice President Buddy Smith said in a press release. “AFA will continue to affirm that all persons are individuals of sacred worth and are created by God in His image.”

U.S. Attorney William C. Lamar praised the sentence against Davis, saying, “It is important to protect free speech, but when it crosses the line and becomes threats to harm others on the basis of race, religious beliefs, political affiliations, or other protected reasons, we will use federal laws to hold those individuals accountable for their actions.”

Facebook CEO Mark Zuckerberg is set to testify before federal lawmakers Wednesday as many worry about Big Tech's bias and handling of misinformation and perceived threats.

"I understand that people have concerns about the size and perceived power that tech companies have," Zuckerberg wrote in a prepared statement obtained by Fox News from someone close to the hearing process.

"Ultimately, I believe companies shouldn’t be making so many judgments about important issues like harmful content, privacy, and election integrity on their own," he continued. "That’s why I’ve called for a more active role for governments and regulators and updated rules for the Internet. If we do this right, we can preserve what’s best about this technology — the freedom for people to connect and express themselves and for entrepreneurs to build new things — while also protecting society from broader harms."

Food bank is handing out 15,000 meals a week to struggling families

Louis Vuitton is selling leather-bound table football games for an eye-watering £61,500 – The Sun