The Foreign Office’s most senior diplomat has privately admitted a statue of 18th Century profiteer Clive of India ‘may have to go’.

Amid growing tensions about Britain’s colonial past, Permanent Secretary Sir Simon McDonald made the concession in a Zoom call with Whitehall civil servants on Monday, The Mail on Sunday can reveal.

Taking part in a virtual meeting with Department for Business officials about Covid-19, Sir Simon strayed into a discussion about the controversial monument of Baron Clive of Plassey that stands between the FCO and the Treasury.

The divisive imperialist is hailed by some for securing 200 years of British rule in India, but his personal enrichment made from plundering the region made him a controversial figure even in his lifetime. 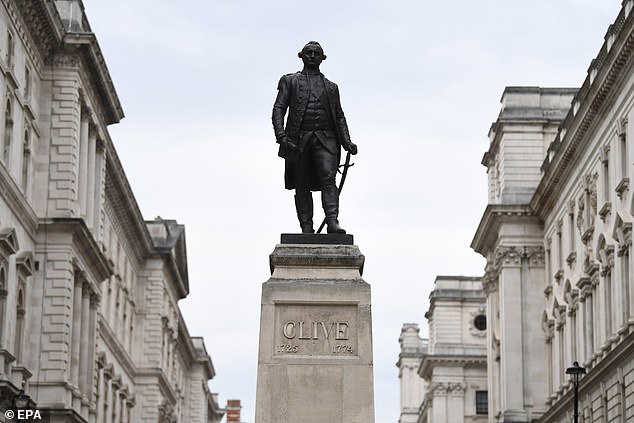 Permanent Secretary Sir Simon McDonald has privately admitted a statue of 18th Century profiteer Clive of India in Whitehall, London, ‘may have to go’

And critics lay the blame for the Bengal Famine that killed ten million in 1770 squarely at Clive’s door, due to his punishing taxation and land reforms implemented when he was Governor of the region.

Clive’s statue was erected more than 130 years after his suicide in 1774.

Sir Simon also let slip that after an internal debate, some statues and paintings inside the Foreign Office may be offensive but are unlikely to be removed.

However, the FCO last night distanced itself from its own Permanent Secretary’s comments, insisting there were ‘no plans’ to take down the statue and pointing out that responsibility for it lies with Historic England.

It added: ‘The FCO is examining the statues and artwork within the department with a view to ensure it is more representative of the UK today, while preserving history.’

An FCO source admitted that Sir Simon’s office had been ‘asked to review who had responsibility for the statue’, but no decision had been made.

A wide review is also taking place internally, with the source adding: ‘With such a long history, there are elements that reflect artwork and individuals from a very different era. We are reviewing both what those elements are, and how best to address what they represent.’ 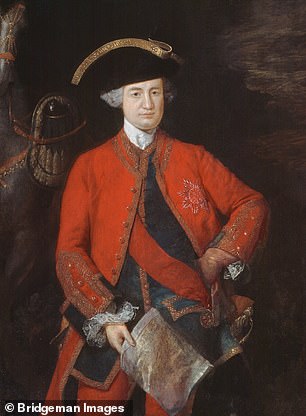 Clive eventually returned to Britain and served as MP and Mayor of Shrewsbury, rich but deeply depressed

The erection of the statue at the turn of the last century was controversial. To his fans, Clive of India is the profiteer who secured British rule in the region for two centuries, but his detractors say he was an ‘unstable sociopath’.

The Shropshire-born clerk, who rose to the top of the East India Company (EIC), took his title from the anglicised name for the Bengali village Palashi, scene of his greatest victory.

Despite having no military training, Clive rose up the ranks of the EIC after a series of stunning strategic victories over the Siraj-ud-Daulah, the last independent Nawab of Bengal.

Facing 50,000 men in 1757, Clive’s 3,000-strong private army was woefully outnumbered, but through tactical cunning and by bribing the Nawab’s cavalry commander, he routed the Bengalis, leading directly to British dominance across India.

With Clive as Governor, historian William Dalrymple writes: ‘Bengal’s wealth rapidly drained into Britain, while its prosperous weavers and artisans were coerced “like so many slaves” by their new masters, and its markets flooded with British products. A proportion of the loot of Bengal went directly into Clive’s pocket.’

Clive eventually returned to Britain and served as MP and Mayor of Shrewsbury, rich but deeply depressed. Never accepted by aristocratic circles, he was eventually brought up on corruption charges.

Despite seeing these off, he took his own life in 1774 and was buried in an unmarked grave.