Ex-NYPD cop is jailed for 10 years after beating an officer with metal flagpole as he tried to storm Capitol in January 6 riots: Thug, 56, is handed the longest sentence yet for MAGA protesters

A retired New York Police Department officer was sentenced on Thursday to a record-setting 10 years in prison for attacking the U.S. Capitol and using a metal flagpole to assault one of the police officers trying to hold off a mob of Donald Trump supporters.

Thomas Webster’s prison sentence is the longest so far among roughly 250 people who have been punished for their conduct during the riot on January 6, 2021. The previous longest was shared by two other rioters, who were sentenced separately to seven years and three months in prison.

Webster, a 20-year NYPD veteran and former Marine, was the first Capitol riot defendant to be tried on an assault charge and the first to present a self-defense argument. A jury rejected Webster’s claim that he was defending himself when he tackled Metropolitan Police Department officer Noah Rathbun and grabbed his gas mask outside the Capitol on January 6. 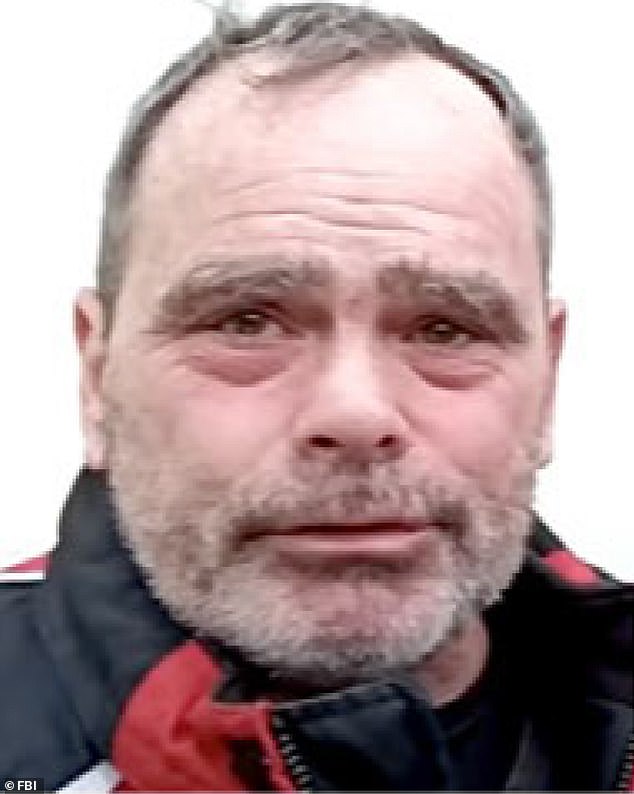 Thomas Webster, 56, of Goshen, NY, a retired NYPD officer was given ten years in prison for assaulting an officer in the January 6 riots

Webster earned the heavy punishment after having joined the uprising by supporters of then-president Donald Trump and attacking police officers guarding the Capitol with a flagpole, the Justice Department said.

Webster wrestled one officer to the ground, held him down, choking the officer by his gas mask, while others in the mob kicked the officer, leaving him with multiple injuries.

‘As a former police officer and US Marine who took an oath to defend the Constitution against all enemies foreign and domestic, Thomas Webster knew the severity of his actions on January 6th,’ FBI officer Steven D´Antuono said in a statement. 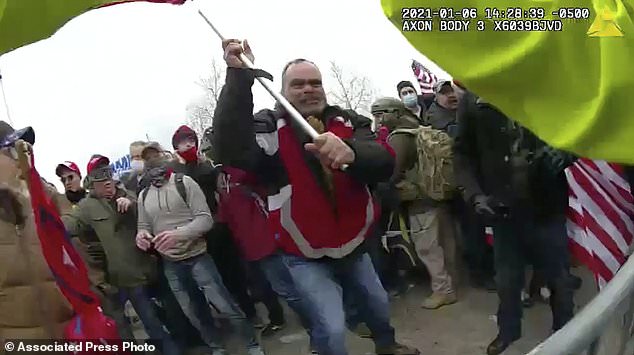 This still frame from Metropolitan Police Department body worn camera video shows Thomas Webster, in red jacket, at a barricade line at on the west front of the U.S. Capitol on January 6

‘When he assaulted an officer at the US Capitol that day, Mr. Webster betrayed not only his oath but also his fellow law enforcement officers, who risk their lives every day to protect the American people,’ he said.

Clearly identified in photographs and videos, Webster was arrested six weeks after the assault and in May was found guilty on five felony charges relating to an assault on a law enforcement officer and one misdemeanor.

Prosecutors said his background, and his wearing of body armor designed to stop gunfire, justified a stiffer sentence.

They said he went into the event planning for violence.

U.S. District Judge Amit Mehta sentenced Webster, 56, to 10 years in prison plus three years of supervised release. He allowed Webster to report to prison at a date to be determined instead of immediately ordering him into custody.

Webster turned to apologize to Rathbun, who was in the courtroom but didn’t address the judge. Webster said he wishes he had never come to Washington, D.C.

‘I wish the horrible events of that day had never happened,’ he told the judge.

‘I too wish you hadn’t come to Washington, D.C. I too wish you had stayed at home in New York … that you had not come out to the Capitol that day, because all of us would be far better off. Not just you … your family … the country,’ U.S. District Judge Amit Mehta was quoted as saying when he announced the sentence on Thursday.

The judge said Rathbun wasn’t Webster’s only victim on January 6.

‘The other victim was democracy, and that is not something that can be taken lightly,’ Mehta added.

Webster was also sentenced to three years of supervised release. 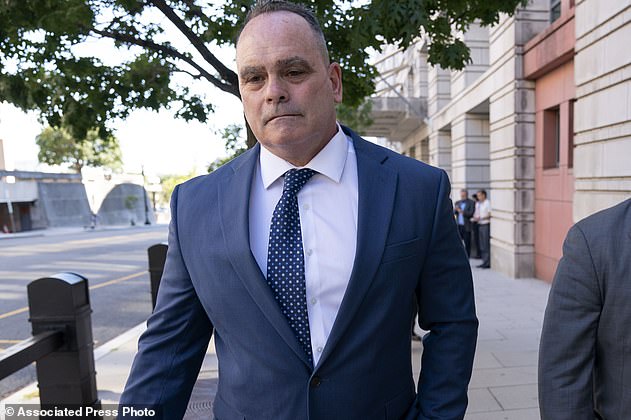 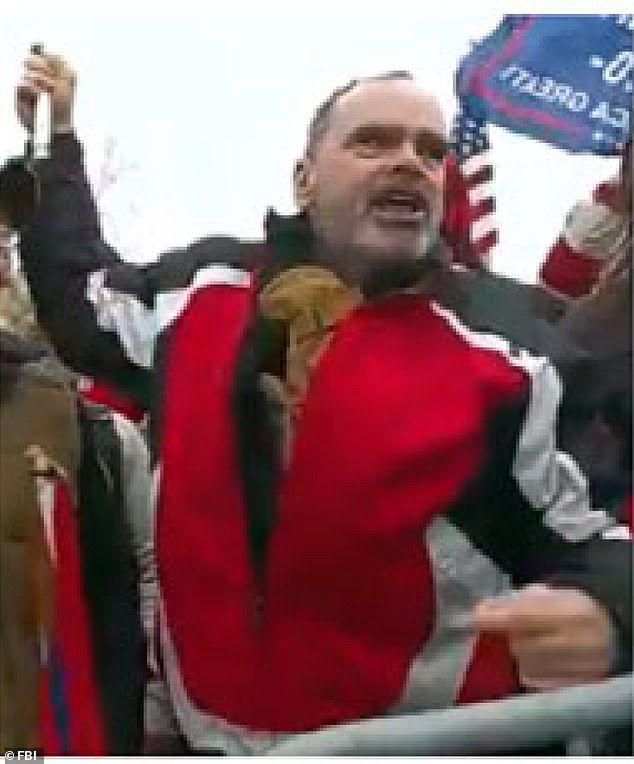 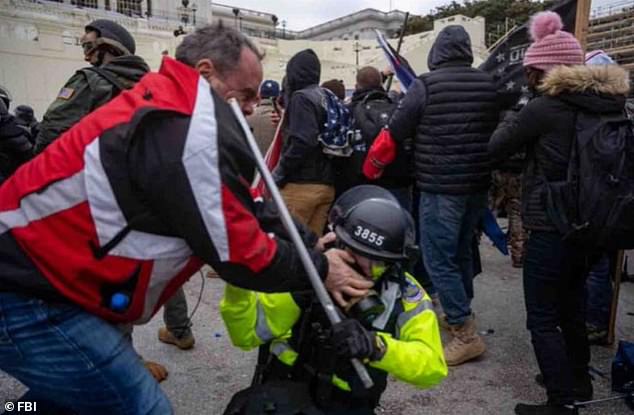 Webster, a retired NYPD officer was seen attacking the U.S. Capitol and using a metal flagpole to assault one of the police officers trying to hold off a mob of Donald Trump supporters

Webster pushed the officer to the ground . The 56-year-old former Marine could be seen swinging a metal flagpole at DC officer Noah Rathbun before crossing police barriers at the US Capitol and tackling Rathbun, choking him with the officer’s chinstrap

In a court filing, prosecutors accused Webster of ‘disgracing a democracy that he once fought honorably to protect and serve.’ Webster led the charge against police barricades at the Capitol’s Lower West Plaza, prosecutors said. They compared the attack to a medieval battle, with rioters pelting officers with makeshift projectiles and engaging in hand-to-hand combat.

‘Webster did not just anticipate violence on January 6; he instigated it,’ prosecutors said in sentencing hearings.

‘In so doing, he knew that he was risking a violent confrontation with someone armed with a gun who would have been authorized to use force, including potentially deadly force, against attacking rioters,’ they said.

Defense attorney James Monroe said in a court filing that the mob was ‘guided by unscrupulous politicians’ and others promoting the lie that the 2020 presidential election was stolen from the Republican incumbent. He questioned why prosecutors argued that Webster didn’t deserve leniency for his 25 years of service to his country and New York City. 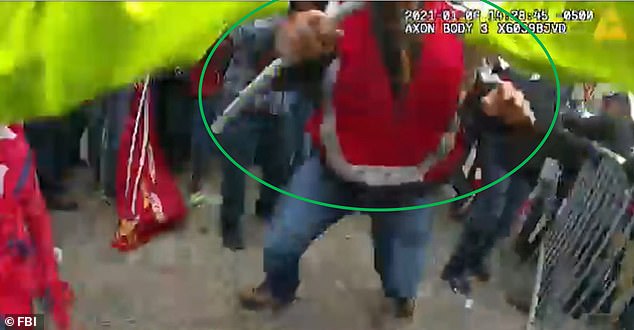 Webster took the witness stand at his trial and testified that he was acting in self-defense, saying D.C. police officer Noah Rathbun had instigated the fight. He can be seen in bodycam vide attacking the officer 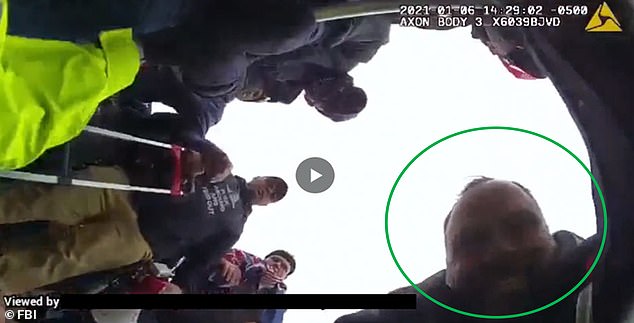 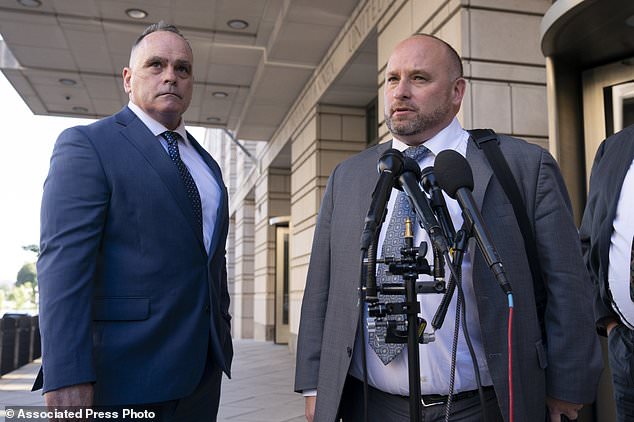 ‘That is not how we measure justice. That is revenge,’ Monroe said.

In May, jurors deliberated for less than three hours before they convicted Webster of all six counts in his indictment, including a charge that he assaulted Rathbun with a dangerous weapon, the flagpole.

Webster was among thousands of Trump supporters who stormed the Capitol in a failed bid to block Congress from certifying President Joe Biden’s 2020 election victory.

The Justice Department says it has arrested more than 860 people for crimes related to the breach of the Capitol, including over 260 who were charged with assaulting or impeding law enforcement.

Webster’s lawyer, while arguing for a shorter sentence, had said his client had been under ‘an extraordinary amount of influence’ from Trump’s election falsehoods.

Also Thursday, a New Jersey man pleaded guilty to using pepper spray on police officers, including one who later died. Officer Brian Sicknick suffered a stroke the day after the riot and died of natural causes. He and other officers were standing guard behind metal bicycle racks as the mob of pro-Trump supporters stormed the Capitol.

Julian Khater, 33, pleaded guilty to two counts of assaulting or impeding officers with a dangerous weapon. He could face up to 20 years in prison, though will likely face a sentence ranging from about 6 1/2 to 8 years at a hearing set for December. 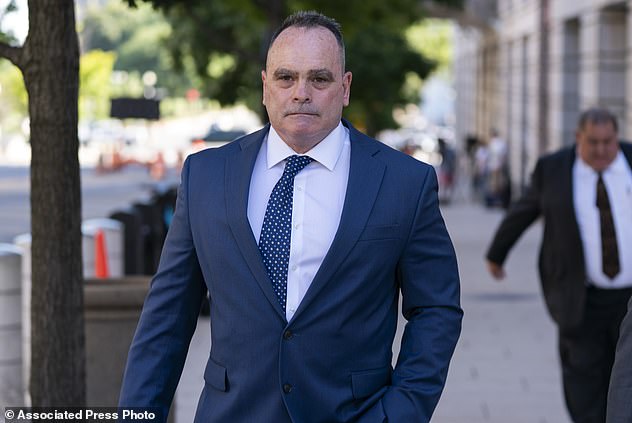 The case against Khater and a second man have been among the more notable brought by the Justice Department. George Pierre Tanios brought the pepper spray in a backpack. Tanios previously pleaded guilty and is also set to be sentenced in December.

Webster had testified at trial that he was trying to protect himself from a ‘rogue cop’ who punched him in the face. He also accused Rathbun of instigating the confrontation.

Rathbun testified that he didn’t punch or pick a fight with Webster. Rathbun said he was trying to move Webster back from a security perimeter that he and other officers were struggling to maintain.

Rathbun’s body camera captured Webster shouting profanities and insults before they made any physical contact. The video shows that Webster slammed one of the bike racks at Rathbun before the officer reached out with an open left hand and struck the right side of Webster’s face. 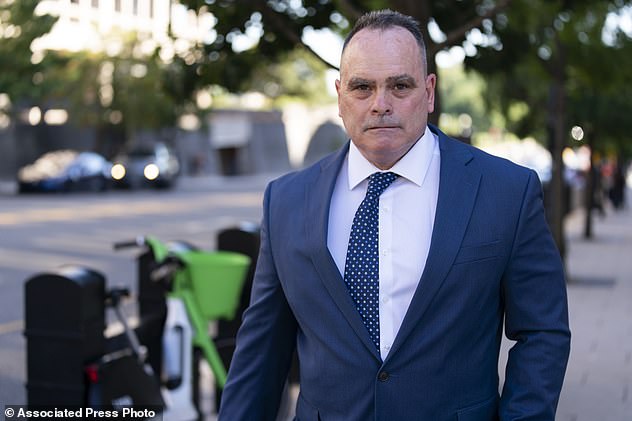 Webster drove alone to Washington, D.C., from his home near Goshen, New York, on the eve of the January 6 ‘Stop the Steal’ rally and was wearing a bullet proof vest

After Rathbun struck his face, Webster swung a metal flag pole at the officer in a downward chopping motion, striking a bike rack. Rathbun grabbed the broken pole from Webster, who charged at the officer, tackled him to the ground and grabbed his gas mask, choking him by the chin strap.

Webster drove alone to Washington, D.C., from his home near Goshen, New York, on the eve of the January 6 ‘Stop the Steal’ rally, where Trump addressed thousands of supporters. Webster was wearing a bulletproof vest and carrying a Marine Corps flag on a metal pole when he joined the mob that stormed the Capitol.

Webster said he went to the Capitol to ‘petition’ lawmakers to ‘relook’ at the results of the 2020 presidential election. But he testified that he didn’t intend to interfere with Congress´ joint session to certify President Joe Biden ‘s victory.

Webster retired from the NYPD in 2011 after 20 years of service, which included a stint on then-Mayor Michael Bloomberg’s private security detail. He served in the U.S. Marine Corps from 1985 to 1989 before joining the NYPD in 1991. 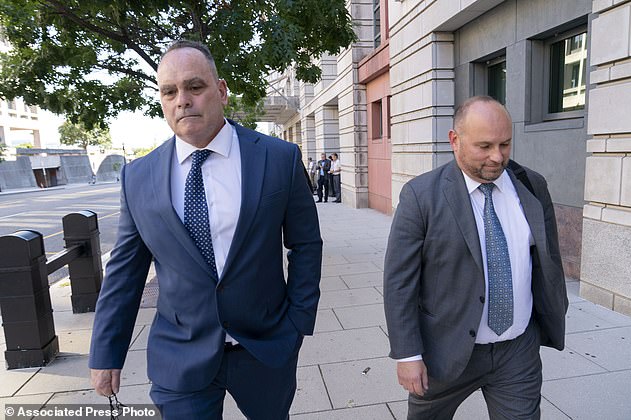 Trump, who has been accused of instigating the attack on the Capitol to stop Democratic rival Joe Biden from being certified as president-elect, has not condemned the violence carried out in his name.

He told a radio interviewer Thursday that if he runs for president again in 2024 and is elected, he will pardon those charged in the violence.

‘I mean full pardons with an apology to many,’ Trump said in the interview with Wendy Bell Radio. 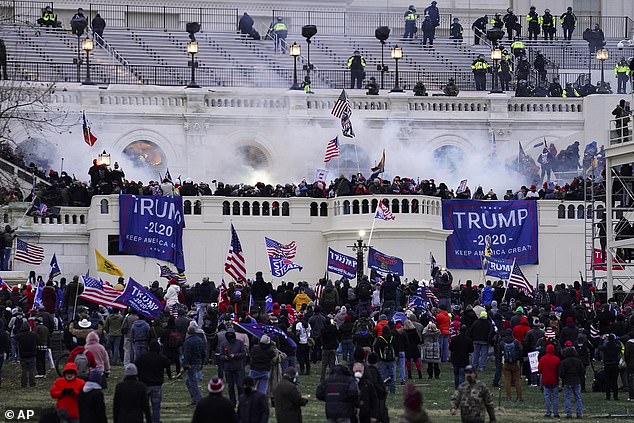 Donald Trump said he would issue pardons to his supporters who stormed the Capitol last year if he wins back the presidency – and said he has met with some of the defendants.

Trump has not yet declared if he is running for president in 2024, but has hinted several times at the move and told supporters at several rallies they would be happy with his decision.

‘I mean full pardons with an apology to many,’ the former president told conservative radio host Wendy Bell Thursday morning.

Issuing a government apology and granting pardons would be contingent on him regaining his seat in the Oval Office.

Trump says that he has met this week with some of the defendants in the case against those who rioted at the Capitol on January 6, 2021.

He even revealed to Bell in the Thursday morning interview that he is helping some of the defendants in terms of financially dealing with the fallout.

‘I am financially supporting people that are incredible and they were in my office actually two days ago, so they’re very much in my mind,’ Trump said. 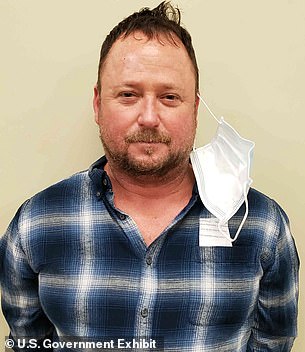 Guy Reffitt, 49, was sentenced to 7 years and 3 months in federal prison after he was convicted in March on five counts, including bringing a weapon to the Capitol grounds

Many Trump supporters who were identified as participating in the riot that day have been convicted and sentenced to jail time – some up to several years.

A fifth casualty of the riot happened the day after when Brian Sicknick, a Capitol Police officer, suffered a stroke after he was sprayed with a powerful chemical irritant during the attack.

Among the rioters sentenced to prison time was Guy Reffitt, 49, a member of the far-right Three Percenters militia from Texas. He was the first Capitol rioter to stand trial, and received a seven year and three month sentence.

Reffitt’s sentencing is the longest given to an insurrectionist.

He was convicted by a grand jury on five felony charges, including bringing a gun onto the Capitol grounds and obstructing an official proceeding.