Despite leaving office in 2013, the 93-year-old, whose original name is Joseph Ratzinger, has not given up intervening in social debates, and he offers a fresh attack against gay marriage in the new biography.

‘A century ago, anyone would have thought it absurd to talk about homosexual marriage. Today those who oppose it are excommunicated from society,’ Benedict XVI says.

‘It’s the same thing with abortion and creating human life in the laboratory,’ he believes, adding that it’s ‘only natural’ for people to ‘fear the spiritual power of the Antichrist.’ 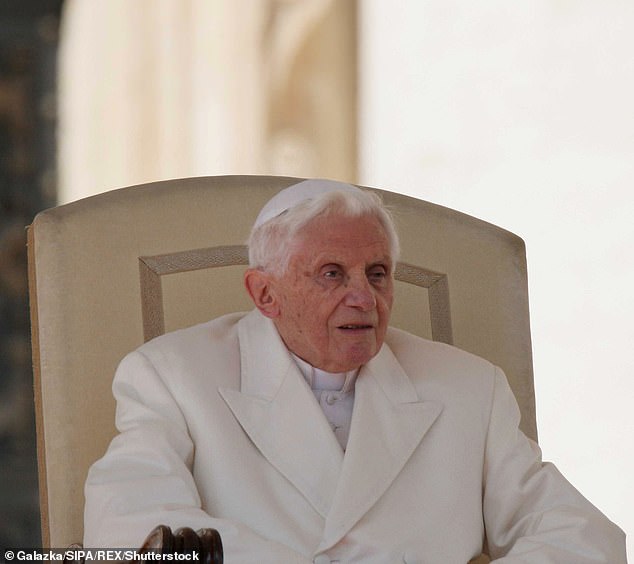 Traditionalist former Pope Benedict XVI, whose original name is Joseph Ratzinger, pictured in The Vatican during his  final audience as as pope in 2013

The ex-pope claims in ‘Benedict XVI – A Life’ that he has fallen victim to a ‘malignant distortion of reality’ in reactions to his interventions in theological debates, according to passages published by German media and news agency DPA.

‘The spectacle of reactions coming from German theology is so misguided and ill-willed that I would prefer not to speak of it,’ he says.

‘I would rather not analyse the actual reasons why people want to silence my voice,’ Benedict added.

The German branch of the Catholic Church has for years been led by clergy more inclined to reform than the stringent traditionalism associated with Ratzinger.

In office from 2005-13, he has frequently been criticised for his attitudes to Islam or to social questions, and is accused of attempting to undermine the modernisation drive of his successor Pope Francis.

Ratzinger attempts to counter such claims in the biography, saying his ‘personal friendship with Pope Francis has not only endured, but grown’. 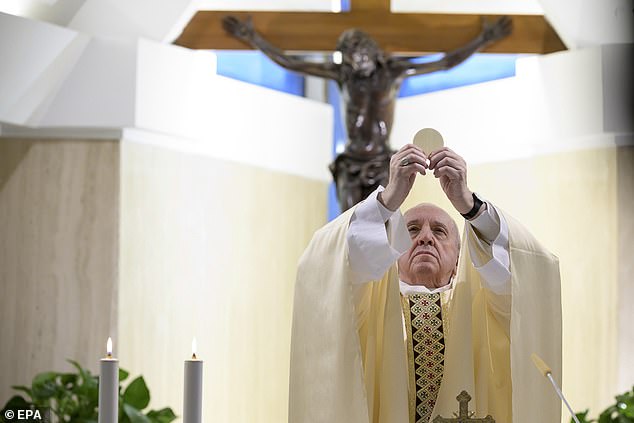 The current pope, Pope Francis, pictured today leading a Mass at Santa Marta in the Vatican City. Francis has been seen as a more progressive pope than his predecessor

In February, Benedict XVI was drawn into a Vatican intrigue when his private secretary was removed from Francis’ entourage.

Some observers had accused the former pope of back-seat driving when a book defending the hot topic of priestly celibacy appeared, bearing his name alongside that of arch-conservative Guinean cardinal Robert Sarah.

After 48 hours of controversy, Benedict XVI asked that his name be removed from the book’s cover, introduction and jointly signed conclusion.

In contrast, Benedict’s replacement Pope Francis has widely been seen as a more unconventional pope during his time since becoming the global leader of the Catholic Church in 2013.

When he was first elected, he chose his own Papal name ‘Francis’, and has also been a more modern and public-facing Pope with his use of social media and stances on social issues.

Sunseekers told to STAY AWAY from 19 beaches in 36.4C scorcher as 13-mile stretch of coast shut