French citizens caught walking the streets during the country’s coronavirus lockdown are being locked up for ‘endangering lives’, it emerged today.

The dramatic development came as complaints against increasingly aggressive police who are making arrests mount, especially in ethnic minority communities.

Until earlier this week, officers were handing out spot fines equivalent to £128 to anyone caught without the right documentation for being out of their homes.

A series of shocking videos posted online have shown officers breaking all basic health guidelines by grouping together and manhandling potential disease carriers as they issued half-a-million pounds worth of fines on Wednesday.

In Nice on the French Riviera, police drones have been seen overhead, ordering citizens to go home.

Armed with a loudspeaker, the drone whirrs above some of the city’s most popular locations, reminding citizens of the government’s confinement order.

On Friday a legal source in Paris said that ‘at least five people who refused to respect confinement were placed in police custody on Thursday.’ 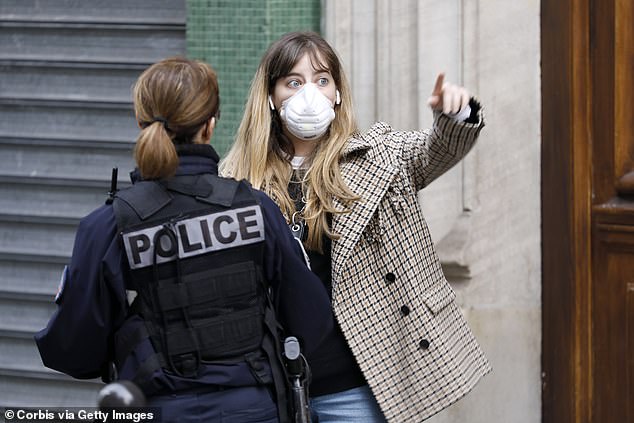 A woman wearing a mask speaking to a police officer on the streets of Paris. Police in France have began arresting people for going outside unless for an essential reason 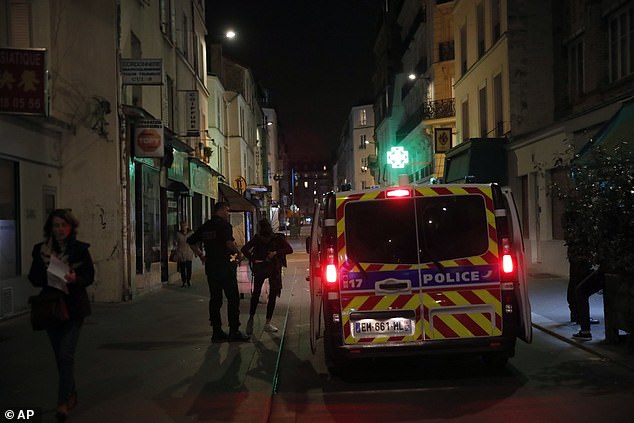 President Emmanuel Macron made unprecedented peacetime orders, telling French residents to stay at home from Tuesday except for essential excursions such as going to the doctor, walking the dog, or going for a solitary run, and banned any gatherings.

France’s two-week lockdown is likely to be extended, as the interior minister blasted ‘idiots’ flouting the home confinement rules.

Officials gave the warning yesterday as many French citizens ignored the ‘social distancing’ directives from authorities.

People can go to the office only if homeworking is not possible.

But news reports have shown groups of people strolling in parks and the three feet safe inter-personal distance has been frequently ignored.

Interior Minister Christophe Castaner accused people of underestimating the risk, telling Europe 1 radio: ‘There are people who think they are modern-day heroes by breaking the rules while they are in fact idiots.’ 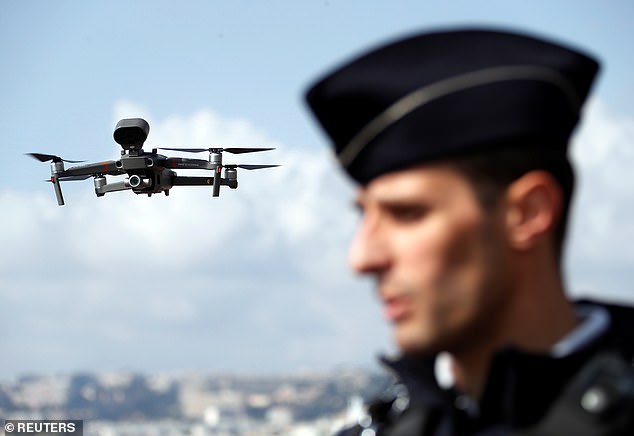 A drone, seen over Nice on the French Riviera, being used by police to order citizens to go home under a new strict curfew 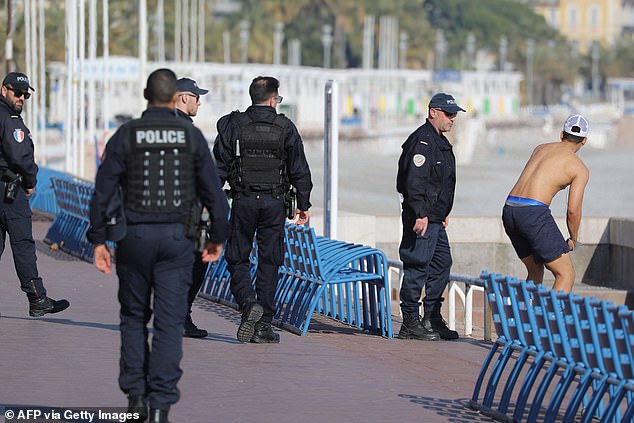 Some officials have called for even stricter limits and Paris police are mulling closing riverside walkways – a move already enforced in Bordeaux.

One national police union urged officers to refuse tasks that brought them into close proximity with the public because of a face mask shortage.

Macron on Thursday deplored that too many people seem to take the confinement measures ‘lightly’.

A source told Le Parisien news outlet that four people were in cells in the Seine-Saint-Denis department, north of the capital city, while the fifth was in the northern Pas-de-Calais for flouting the new rules.

All face a charge of ‘endangering the lives of others’, which is punishable with up to one year in prison and a fines equivalent to £14,000.

Those arrested are repeat offenders, who continually remain on the street despite being ordered home, said another judicial source.

‘We need a firmer tool to enforce the ban on wandering about,’ he said. ‘People need to understand that this is an emergency, and you can’t just go where you want to go, and mix closely with other people.’ 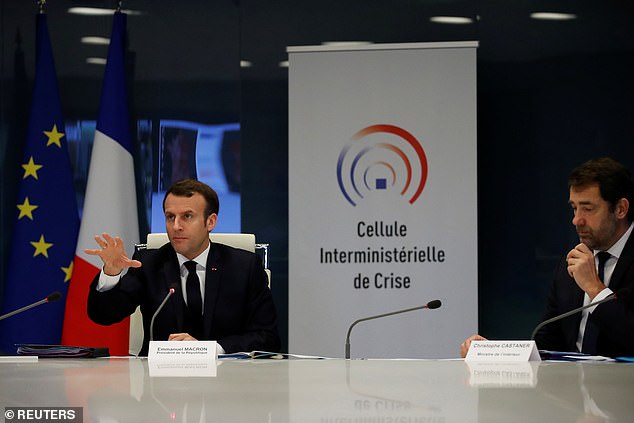 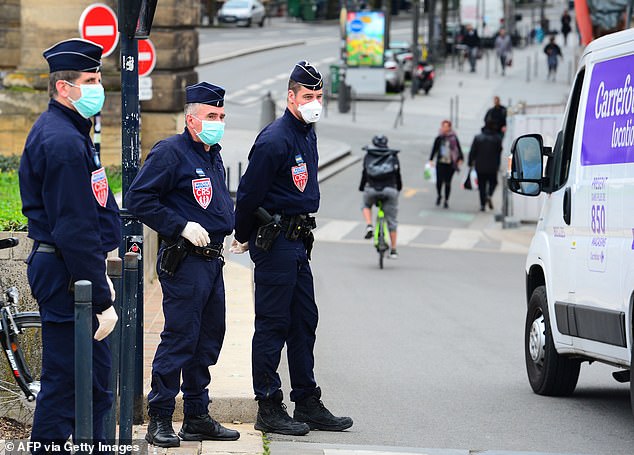 Seine-Saint-Denis is the poorest department in France, and is full of homeless people, and undocumented immigrants, as well as low-income council estates with law and order problems.

Police are increasingly being criticised for their rough handling of people living in such areas, as videos emerge of increasing violence.

One film that was posted on Twitter on Thursday shows a young woman who is said to be 18 being pushed to the ground by a group of officers in the commuter town of Aubervilliers.

Another is of officers punching a man on the ground in the Paris suburb of Villeneuve-Saint-Georges.

A spokesman for France’s Interior Ministry said 226,000 spot checks of documents were carried out on Thursday alone, with 18,000 people issued with police warnings.

There were 108 deaths from coronavirus in France on Thursday alone.

Macron said: ‘When I see that people continue to go to the park, to socialise together, to go to the beach or to rush in the open markets, it is clear that they did not understand the messages.

‘We are at the start of this crisis. We have taken exceptional measures to absorb this first wave, but we’ve started a race against the virus,’ Macron said at the start of a crisis meeting at the Interior Ministry. 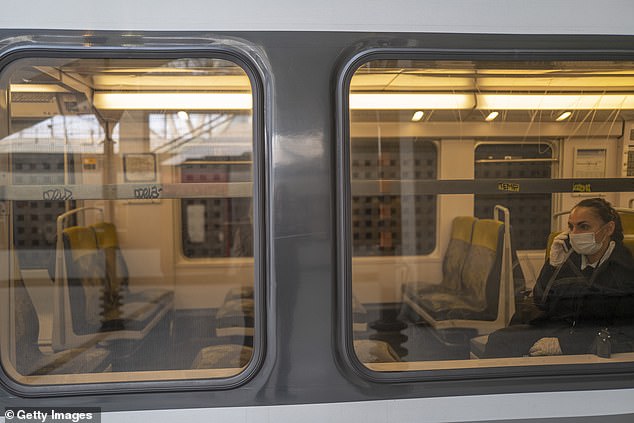 Commuters wearing masks while riding the metro in Paris. France’s lockdown restrictions could be extended by authorities

‘We must react a great deal and reorganise ourselves at every moment. We need to anticipate.’

The President added that a Defence Council meeting would take place on Friday, and that the current two-week lockdown might be extended to at least six weeks.

Jérôme Salomon, France’s Director General of Health, said: ‘The epidemic is large and spreading, with rapid and intense circulation’.

As the coronavirus sweeps across the globe, country upon country has announced tough restrictions on public life as policymakers struggle to deal with the biggest public health crisis since the 1918 influenza pandemic.

‘When I see that people continue to go to the park, to the beach or to rush into open markets’ it means that ‘they have not understood’ the rules of the lockdown, Macron told journalists on a visit to the Pasteur Institute for medical research in Paris.

The president also urged companies and workers to continue their activities ‘in compliance with the health safety rules’.

Genevieve Chene, who heads France’s public health agency, said two to four weeks of confinement are needed for the outbreak to be adequately contained.

‘It is likely that it is indeed necessary to extend (the containment measures) in order for the braking to be sufficient,’ she said, adding that France’s outbreak peak was likely to be around the middle or end of May. 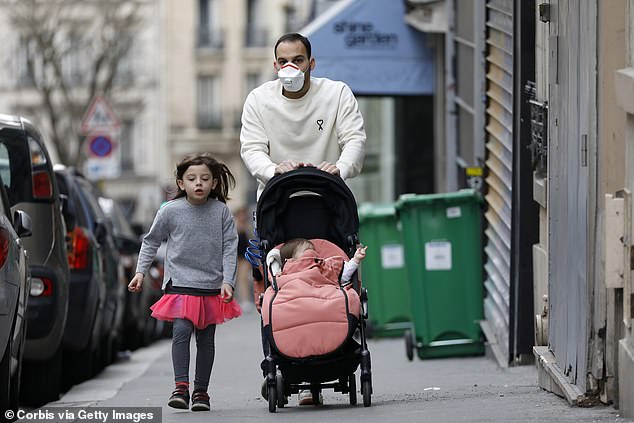 A man with children wearing a face mask walking in Paris. French authorities have been clamping down on citizens flouting new social distancing restrictions

The timing will depend largely on how closely people conform with the confinement measures, said Chene.

Beaches and hiking trails along the Atlantic coast in the Morbihan region of Brittany were closed Thursday because of a ‘significant number of people along the coast… which risks spreading the virus’, the top government official for the region said.

Access to the entire Mediterranean coast was also closed because ‘We are seeing too many people on the beaches’, regional prefect Pierre Dartout said.

And in Paris, Mayor Anne Hidalgo and police chief Didier Lallement issued a ‘solemn appeal’ for people to limit their outings to ‘the strict minimum’.

The Sacre-Coeur basilica overlooking the capital was closed for the first time since it was built in 1914.

Castaner said people who left their homes without an important reason were ‘putting themselves at risk, their families and their loved ones, but also the health workers who will be there, even if they behaved foolishly… to treat them, to save them’. 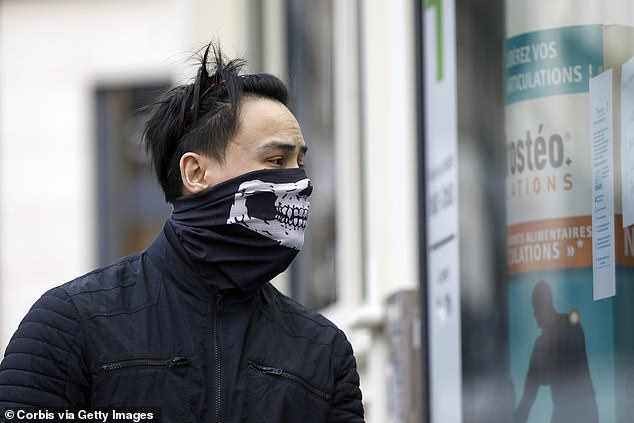 A man wearing a face mask in Paris today. As of today, 10,995 people have tested positive for COVID-19, including 1,861 new cases over the past days and 372 people have died in France

The minister also railed against thefts of surgical masks from hospitals and said the authorities would deal harshly with anyone found to be involved in the ‘despicable’ illegal trade of such protective equipment.

More than 170 rooms will be made available in Paris by the end of the week and the government has identified 80 sites elsewhere for an estimated 250,000 homeless.

Some 50 million euros has been set aside for the project.

Some 100,000 police have fanned out across France to enforce the lockdown, with people allowed out of their homes only to buy groceries, go to work, exercise alone or seek medical help. The measure prompted a mass exodus from Paris to the countryside.

Anyone venturing outside must carry a document justifying their movement, or risk a fine. In the past 24 hours, tens of thousands of police checks had been carried out and more than 4,000 penalties issued, Castaner said. 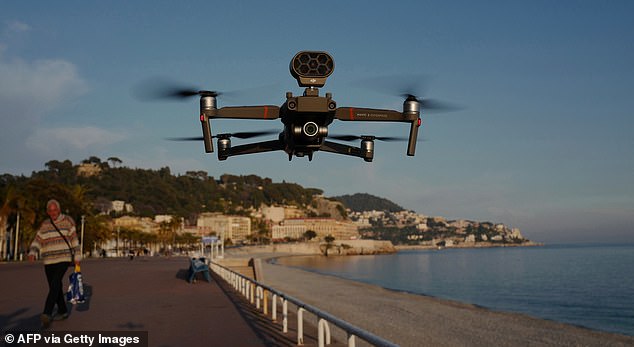 From the western Atlantic coast to the French Riviera, police used loudspeakers to clear beaches as the first week of warm sunshine lured people outdoors.

On Thursday, Macron and his government were coming under intense pressure from doctors, police and the public over a shortage of face masks, gloves and other protective gear.

Countries across Europe are desperately seeking to ramp up the production of face masks, with tight supplies from Italy to Germany testing solidarity between European Union member states.

One nurse working at the Pitie Salpetriere hospital in Paris, whose intensive care unit is on the frontline in the battle to keeping critically-ill coronavirus sufferers alive, told Reuters basics like masks and hand sanitizer were in short supply.

‘Medics [in other wards] who do not show any symptoms are being asked to work with no protection. It’s shocking,’ the nurse said, requesting anonymity because she is not authorised to talk publicly.

There were also complaints from police that officers tasked with manning checkpoints did not have adequate protective gear. The moderate CFDT union urged its officers to stop all vehicle checks or jobs that brought them into close contact with people.

Celebrities offer their services on Zoom as speakers and quiz hosts

Who was Edward Colston and how was he involved in the British slave trade?