Free pint… if you bring loo roll! Pub comes up with unique offer to drinkers amid coronavirus crisis after it faced closing due to lack of toilet paper

A pub on the brink of closing due to dwindling supplies of toilet paper is offering punters a free pint in exchange for loo roll.

The Jolly Roger in Gosport, Hants, has been hit by the effects of shoppers stockpiling bathroom essentials in preparation for self-isolation due to the coronavirus.

Landlady Hayley Hodd said a failure to provide basic sanitation through toilet roll and soap led to a real threat of having to shut the venue – until she came up with a clever solution.

Customers can enjoy any free drink from behind the bar in exchange for four toilet rolls – and after putting the message out the pub has been flooded with 72 donations in two days. 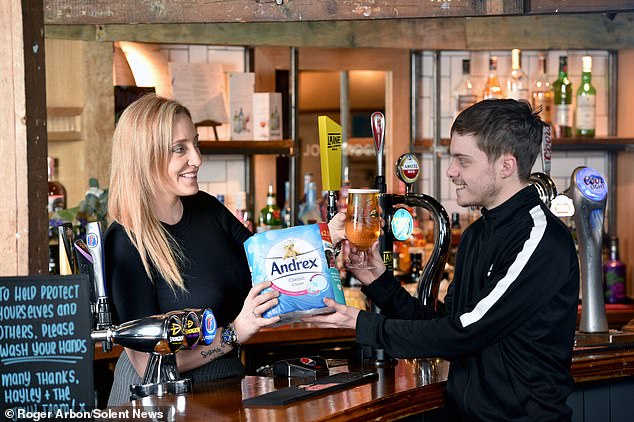 The Jolly Roger pub in Gosport, Hants, is offering punters a free drink in exchange for loo roll, pictured, after a lack of bathroom essentials left the venue on the brink of closure

Ms Hodd, 38, said drinkers can also exchange other essentials such as hand pump soap, toothpaste and rubber gloves for a beer, wine or spirit.

The landlady said: ‘We were really close to being out of toilet rolls and hand soap and would have had to close down – we can’t remain open without the essentials.

‘None of our regular suppliers have any soap or antibacterial solution left. If we had run out then the Environmental Health Office would have instructed us to close.’

Determined to stay open, Ms Hodd issued a plea on social media. It said: ‘We need you! We as a pub are running low on toilet roll and we want to make a deal.

‘If you bring us four toilet rolls we will trade you a pint, a spirit or a glass of wine. Happy trading.’

Ms Hodd was delighted with the response. She said: ‘Now we’ve got regulars coming in to get their Guinness or Birra Moretti for free. 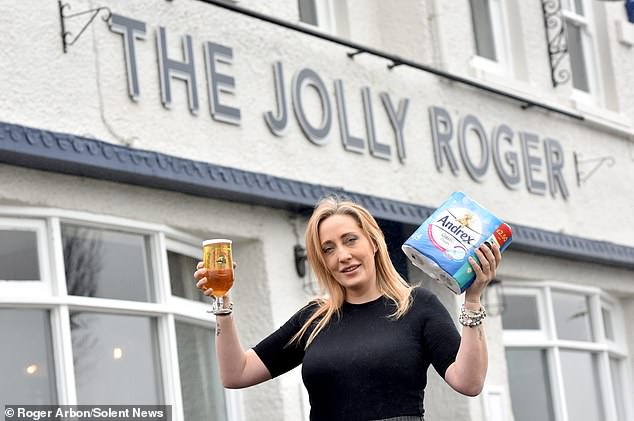 Landlady Hayley Hodd, pictured outside the pub with a pint and the toilet paper, said the venue has been inundated with donations since putting an appeal out on social media

‘One lady came in with 12 rolls so she had a whole bottle of wine on the house for her effort.

‘The regulars usually stick around for another drink after as well.

‘We’ve also had new customers coming in for a free drink too, which has been nice.

‘In total we’ve had 72 toilet rolls, 12 soaps, three pairs of rubber gloves and 10 tubes of toothpaste.

‘We only had a pack of 12 toilet roll before, that would have only lasted a couple of days, and were nearly empty on hand soap – which would have been the real killer.’

She added: ‘It’s obviously a very serious situation but I hope this light-hearted message may have just brought a smile to people’s faces.’ 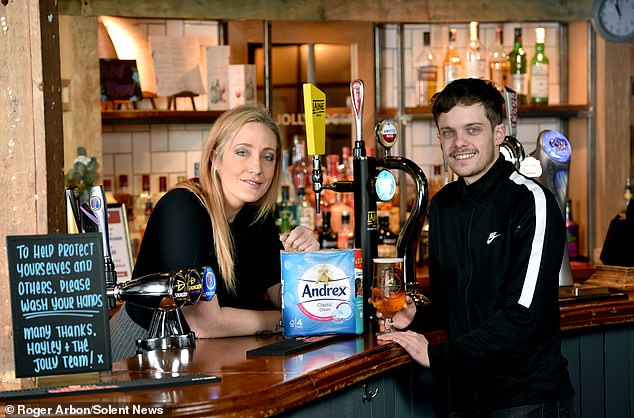 Ms Hodd, pictured left, carrying out a transaction at the bar, says Boris Johnson’s decision to only recommend people don’t visit pubs, rather than announcing they must close, has put the business in a ‘difficult situation’

‘The fact the government has recommended that people don’t visit pubs rather than announcing we must close has put us in a more difficult situation,’ she said.

‘If we make the decision to close then I will have to cover all the costs. For my insurance company to step in it would have to be a government-led decision.’

Generous Ms Hodd, a mother-of-two from nearby Stubbington, said the pub now has ‘more than we need’ so is putting hampers of items together to give to vulnerable people who cannot find them in shops.