Paris: French voters have inflicted a sharp setback on Marine Le Pen’s far-right party, the National Rally, in the first round of nationwide regional elections, dashing her hopes of turning the vote into a springboard for next year’s presidential race.

A centre-right party, Les Republicains, appeared to cement its hold on the country instead, positioning itself as a strong challenger to President Emmanuel Macron, whose centrist party LRM trailed in all regions capturing only about 10 per cent of the votes. 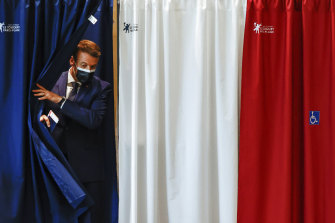 French President Emmanuel Macron leaves the voting booth during the first round of French regional and departmental elections, in Le Touquet-Paris-Plage, northern France on Sunday.Credit:AP

Ipsos exit polls estimated Les Republicains had pulled ahead in six of 13 mainland regions, capturing about 29 per cent of the vote nationwide. By contrast, Le Pen’s National Rally came first in only one region and received 19 per cent of the overall vote.

That was a sharp decline from the first-round results of the previous regional elections in 2015, when National Rally finished first in six regions.

The vote was marked by a record-low turnout. Roughly 34 per cent of voters cast ballots, meaning that about 30 million people stayed away.

“Our voters did not come out,” Le Pen said as results filtered through. She urged her supporters to mobilise for the second round next Sunday. 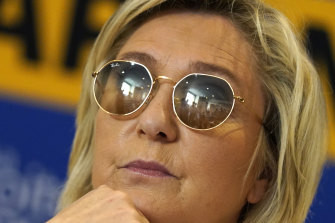 Far-right leader Marine Le Pen had hoped to use the regional elections as a springboard for next year’s national ballot.Credit:AP

A second-round win in Provence-Alpes-Cote d’Azur, the department that is home to Marseille, the country’s second-largest city, would be the first such victory for the far-right in France.

Though regional elections in France rarely carry high political stakes, this year’s were regarded as a bellwether for the approaching presidential race. Le Pen had unabashedly framed the contest as a dress rehearsal for the 2022 elections, in which she will most likely be the main challenger to Macron.

Macron’s party lacks an established infrastructure in many regions, which could help to explain its weak performance.

Several leaders of Les Republicains have also been counting on the regional elections to build momentum for a potential presidential bid.

Changes in turnout between the two rounds could potentially shift the momentum in favour of one party or the other. But the centre-right appeared on course to make strong gains.

The political campaign — which was delayed by a year because of the pandemic — has been marked by acts of violence against political leaders, letters from military personnel warning of an impending civil war and inflammatory speeches fuelling France’s growing culture wars.

“We see a growing polarisation of society, aggressive debates, an extremely frictional and inflammatory dimension,” said Bruno Cautres, a political scientist at the Centre for Political Research at Sciences Po university in Paris.