Home » World News » From the Archives, 1876: A demonstration of the telephone 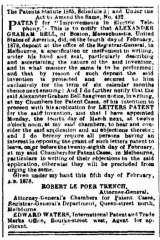 Patent for “Improvements in electric telephony” from the Age, February 9, 1878Credit:The Age

In the United States Telegraphic Department I saw and heard Elisha Gray's splendidly worked out electric telephone actually sounding four messages simultaneously on the Morse code, and clearly capable of doing yet four times as many with very moderate improvements of detail; and I saw Edison's automatic telegraph delivering 1015 words in 57 seconds, this done by the long neglected electro-chemical method of Bain, long ago condemned in England to the helot work of recording from a relay, and then turned adrift as needlessly delicate for that.

In the Canadian Department I heard "To be or not to be" — "there's the rub," through an electric telegraph wire; but scorning monosyllables, the electric articulation rose to higher flights, and gave me passages taken at random from the New York newspapers: "S. S. Cox has arrived" (I failed to make out the S. S. Cox), "the City of New York," "Senator Morton," "The Senate has resolved to print a thousand extra copies," "The Americans in London have resolved to celebrate the coming 4th of July."

All this my own ears heard spoken to me with unmistakable distinctness by the thin circular disc armature of just such another little electro-magnet as this which I hold in my hand. The words were shouted with a clear and loud voice by my colleague-judge Professor Watson at the far end of the line, holding his mouth close to a stretched membrane, such as you see before you here, carrying a little piece of soft iron, which was thus made to perform in the neighbourhood of an electro-magnet in circuit with the line motions proportioned to the sonorific motions of the air. 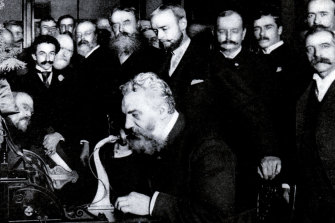 Alexander Graham Bell, inventor of the telephone, opens long-distance service between New York and Chicago in 1892.

This, the greatest by far of all the marvels of the electric telegraph, is due to a young countryman of our own, Mr. Graham Bell, of Edinburgh and Montreal and Boston, now becoming a naturalised citizen of the United States.

Who can but admire the hardihood of invention which devised such very slight means to realise
the mathematical conception that, if electricity is to convey all the delicacies of quality which distinguish articulate speech, the strength of its current must vary continuously, and, as nearly as may be, in simple proportion to the velocity of a particle of air engaged in constituting the sound.

Mr W. Wallace's address at the meeting of the British Association