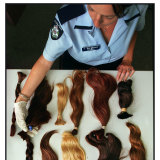 Police said yesterday they had confiscated 11 human hair pony tails from a house in the inner Melbourne suburb of Carlton.

Police also confiscated a bag of human hair, which the occupant of the house told them came from wigs.

Their investigations were sparked after a woman at Merlynston railway station in Melbourne’s north had her pony tail cut and stolen.

On that Information, they issued a search warrant at the Carlton house yesterday.

The occupant told them he obtained the pony tails by going up to women in the street and offering them money for their locks.

Police also confiscated several clippings from the house which appeared to have been photocopied from books.

The clippings described attacks on women whose hair was cut off.

One read: “All three seized her. She screamed and a large hand covered her nose and mouth.. Her wide, dilated eyes saw the long strands of her hair falling from her head as the sheers did their brutal work… When her head was completely shaved they let her go.”

Senior Detective Andrew Kilpatrick, of the Transit CIB, today called for anyone who sold their pony tails or who had the hair stolen to come forward.

Senior Detective Kilpatrick Is questioning a 33-year-old man over the matters.

Lawyer is kidnapped after gunmen shot up his car in Mexico