FTSE 100 falls for the first time this week by 1.75 per cent to 6,696 in the wake of the collapse of FlyBe while drop off in travel adverts amid the coronavirus outbreak sees ITV suffer its worst day in three years

Britain’s blue-chip index opened slightly up, but quickly reversed gains and fell by 1.75 per cent, to 6696 points.

The UK’s stock markets had rebounded since Monday following their worst week since the 2008 financial crisis, after coronavirus panic wiped more than £251billion off the value of Britain’s biggest companies.

Signs of economic damage continues to pile up, however, with airline Flybe a high profile casualty on Thursday as it shut operations just a month after a publicly-sanctioned rescue.

Bank Standard Chartered, housebuilder Persimmon, and miners BHP Group and Rio Tinto , which were all trading without dividend entitlement, also dropped between 4.3 per cent and 5.1 per cent. 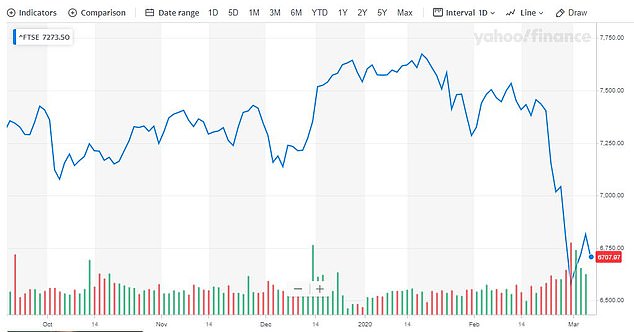 Britain’s blue-chip index opened slightly up, but quickly reversed gains and fell by 1.75 per cent, to 6696 points 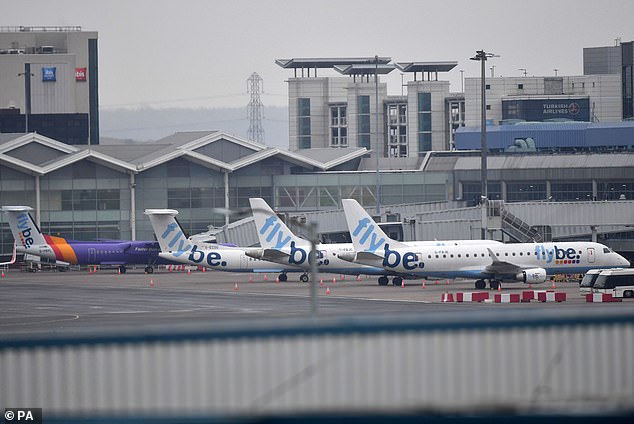 And broadcaster ITV also plunged by 9.1 per cent after a warning that total advertising revenue will be down due to a fall in travel advertising due to the virus.

‘There is a certain amount of fear and nervousness in the market,’ said Keith Temperton, a trader at Tavira Securities.

A surprise interest rate cut by the U.S. Federal Reserve on Tuesday pumped yet more money into financial institutions but it also added to a growing sense of panic among investors coddled by a decade of constant stock market gains.

The IMF now predicts that global GDP could see its slowest growth since 2008-2009 this year and Deutsche Bank analysts on Thursday cut their forecast for British economic growth in 2020 to just 0.5 per cent.

Deutsche’s economists outlined a range of expected official responses to the outbreak, including two cuts in interest rates by the Bank of England by May. 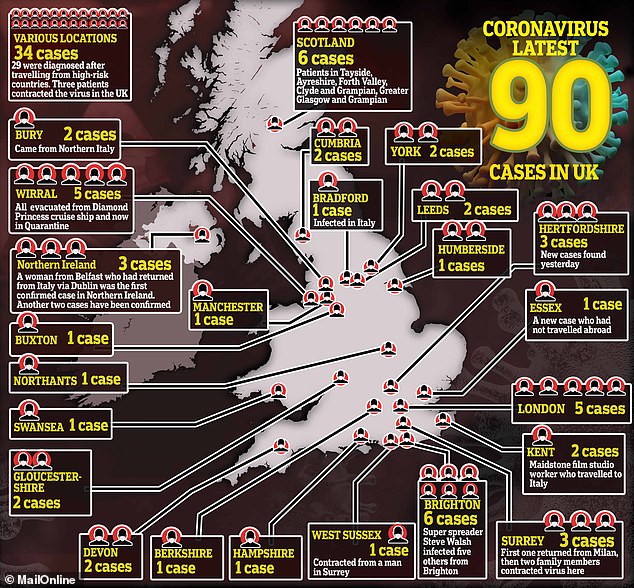 There are now 90 confirmed cases of the coronavirus in Britain, after three more were confirmed in Scotland this morning

‘Markets might want to push for another Fed rate cut,’ Tavira’s Temperton said. ‘The European Central Bank, on the other hand, doesn’t have a lot of room. Once volatility markets are trading in the mid-30’s, things become very speculative.’

Miners, airlines and luxury goods makers were hit hard last week as the virus spread deeper in Europe and the United States and crippled supply chains and travel demand.

Shares in British Airways-owner IAG fell 1.9 per cent, while EasyJet was flat.

The mining index declined 4.2 per cent, also pressured by a strong pound.

UK outsourcer Capita Plc sank as much as 15% on signs its restructuring drive would require more capital.

Why are Bernie Sanders' Mittens trending?