A German officer who allegedly plotted to assassinate cabinet ministers while posing as a Syrian refugee has appeared in court on the first day of his trial.

Franco Albrecht, 32, a lieutenant who was once entertained as a guest of the British Army at Sandhurst, lived a double life for more than a year while posing as an asylum seeker.

He applied dark make-up and wore a beard as he travelled hundreds of miles each week between his Bundeswehr base and the asylum centre where he was known as David Benjamin, a Christian fruit seller from Syria.

Prosecutors allege that Albrecht was stealing munitions and explosives from the barracks while plotting to kill politicians including then justice minister Heiko Maas.

It is claimed that Albrecht wanted to stir up unrest by carrying out the attack disguised as a refugee to foment a civil war against Angela Merkel’s government.

Albrecht denies the terror charges and claims he was conducting private research to expose flaws in the asylum system and the ease with which it could be exploited. 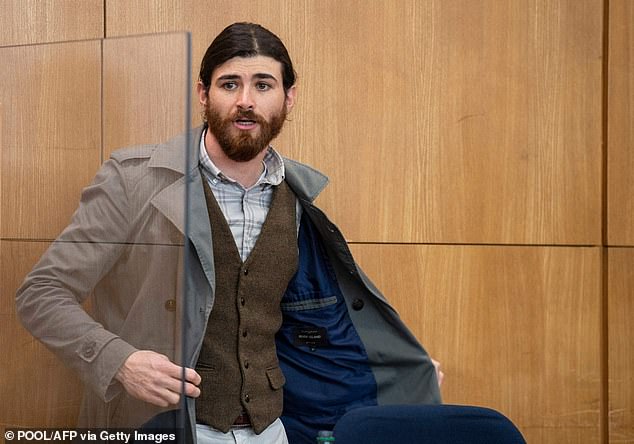 Franco Albrecht, 32, takes off his coat as he arrives on the first day of his trial at the Higher Regional Court for the start of his trial in Frankfurt am Main, western Germany 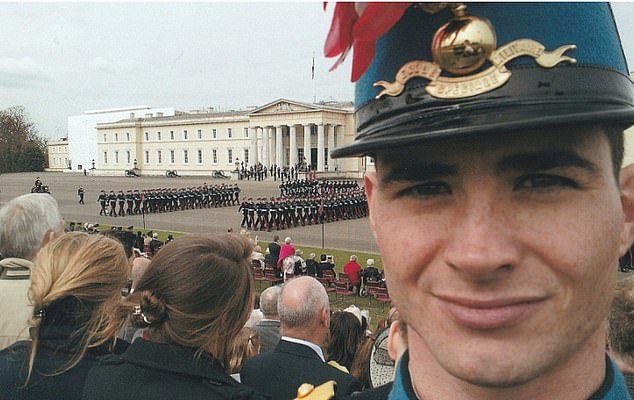 If convicted, he could face up to 10 years in prison.

Set to last until August, the trial’s opening has already been delayed several times by questions over which court was competent to hear the case.

The son of a German mother and an estranged Italian immigrant father, the lieutenant made no secret of his far-right views.

According to a court ruling from 2019, investigations showed he owned a copy of Adolf Hitler’s book ‘Mein Kampf’ and believed immigration to be a form of genocide.

In an attempt to expose a system he saw as compromising national security, he posed as a refugee to apply for asylum in his own country. 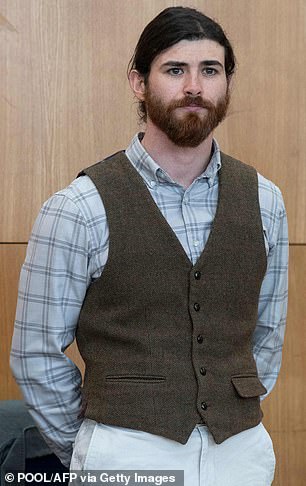 Albrecht waits at the Higher Regional Court for the start of his trial in Frankfurt am Main, western Germany, on Thursday

Using make-up to darken his face and pretending to be a Christian fruit seller from Damascus, he was registered by authorities under the name ‘David Benjamin’, despite speaking no Arabic.

He obtained a space in a shelter and monthly benefits of 409 euros ($485), before later returning to his barracks in Illkirch on the French border.

His double identity was only uncovered in 2017 after he was arrested while trying to retrieve a Nazi-era pistol he had hidden at Vienna’s international airport.

The fraud laid bare the struggles of Germany’s immigration system to cope with the influx of more than one million asylum seekers – many of them Syrian – during the refugee crisis of 2015 and 2016.

‘I tried to be prepared the best I could,’ Albrecht said of his scheme in an interview with the New York Times published in December. ‘But in the end, it was not necessary at all.’

In a recent interview with French newspaper Le Figaro, he said that he knew what he was doing was against the law.

Yet he denied that he had been planning an attack, claiming that he had acted ‘to protect his family in case of an emergency’.

Prosecutors, however, claim that he planned to use both the pistol and other weapons and explosives in order to carry out an attack under his false refugee identity.

They believe that the targets were Maas, the then justice minister, deputy speaker of parliament Claudia Roth or a human rights activist.

The revelations strained the relationship between the armed forces and then Defence Minister Ursula Von Der Leyen, who is now president of the European Commission.

It also raised questions about the army’s seriousness about combating right-wing extremism within its ranks.

He has promised tougher security measures, including a crackdown on online hate speech.