Washington: The number of people infected with coronavirus has reached 500,000 as economies around the world reel from the impact of widespread lockdowns. 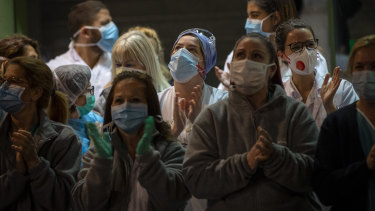 Health workers react as people applaud from their houses in support of the medical staff that are working on the COVID-19 virus outbreak at the main gate of the Hospital Clinic in Barcelona, Spain.Credit:AP

Italy has shut down most of its industry, and a record-shattering 3.3 million Americans applied for unemployment benefits in a single week.

In India, where the country's 1.3 billion people were under orders to stay home, legions of poor were suddenly thrown out of work, and many families were left struggling for something to eat.

The Indian government announced a 1.7 trillion rupee ($A37 billion) economic stimulus package that will deliver monthly rations of grain and lentils to a staggering 800 million people.

Charter schools are the best way to wipe out educational disparity

REVEALED: The violent pro-Trump mob that stormed the US Capitol