A Tamil asylum seeker family’s hopes of returning to the Queensland town of Biloela appear to have been dashed by the Morrison government, with resettlement in the United States or New Zealand now appearing more likely.

On Sunday, their youngest daughter was evacuated from Christmas Island to Perth for urgent medical treatment following two weeks of illness. 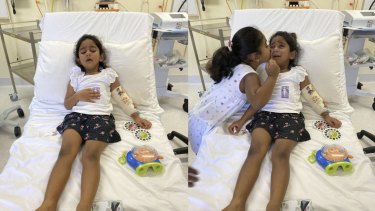 Tharnicaa and her sister Kopika in hospital on Christmas Island on June 6.

Family friends have lashed the “cruel” delay in treatment, which has led to a pledge from the town’s mayor to continue fighting to “get them home” to Biloela.

But late on Tuesday afternoon, Foreign Minister Marise Payne appeared to rule out a Queensland homecoming for the family.

“I understand that there are two options that are being looked at,” she told Sydney radio station 2GB. “I understand the United States is the first of those and that New Zealand is also an option.”

Little Tharnicaa Murugappan, 3, was diagnosed with pneumonia after she was flown from the Christmas Island detention centre in the Indian Ocean, having fallen ill.

Along with the rest of her family, mother Priya, father Nadesalingam and big sister Kopika, 5, Australian-born Tharnicaa has been detained on Christmas Island since August 2019 as the federal government attempts to deport them from Australia.

That deportation is being fought in the courts.

Home Affairs Minister Karen Andrews hinted at a possible resolution when asked about the case earlier on Tuesday.

“We are going through the process now of investigating a range of resettlement options in relation to a number of different circumstances here in Australia,” she said.

“I can’t make public commentary on that at the moment because I don’t want to disrupt those negotiations.”

“I would say to [Ms Andrews] now, today, with this devastating medical emergency for this young three-year-old girl Tharnicaa, it’s time to just make a decision,” she said.

“It’s time to stop giving promising indications, it’s time to just make the right decision. The humane decision. People across Australia from all political stripes would welcome this. This is not a political debate.”

In a statement released through the Home to Bilo group, mother Priya Murugappan said she had been requesting medical attention for her daughter in the detention centre since May 25, but was only given Nurofen and Panadol, along with advice on common flu symptoms.

“I am feeling very scared and worried for my little girl,” she said.

“She is already asking for her papa, it is going to be very hard being away from her dad and sister.”

Family friend Angela Fredericks said she was furious at how long it took Tharnicaa to receive appropriate treatment.

“I feel like the staff’s refusal to listen to these girls’ parents has essentially caused this medical crisis,” she said.

International Health and Medical Services, which provides medical services at the Christmas Island centre, insisted it had provided “appropriate and timely medical care”.

A series of court orders have prevented their deportation, with the family’s future resting on whether Tharnicaa, who turns four next week, has a right to apply for a protection visa.

Banana Shire Council Mayor Neville Ferrier said the family should be returned to Biloela, about 420 kilometres north of Brisbane.

“I suspect [the federal government] will have to make a decision sooner or later, hopefully sooner,” he said.

“I think they should send them home here while the court case is going on. They’ll be looked after here.

“They weren’t any trouble here before and things would be a lot better if the little girls could be back in Biloela with friends and family looking after them.”

Cr Ferrier said the community would “keep battling till they can get them home”.

The family’s immigration lawyer Carina Ford said the whole experience had been traumatic for both mother and daughter.

“[Tharnicaa] is by no means recovered yet, and we’re still in a period of uncertainty, but she’s in good hands,” she told Nine News in Perth.

Ms Ford said she was grateful for the outpouring of support for the family, especially from Queensland, where the family had strong connections in the community.

Australian Medical Association WA president Andrew Miller said the government needed to be quicker to act when people become ill if it insists on keeping people incarcerated in remote areas.

“The responsibility of the people keeping her there is higher than it is for even the general community, because they’re preventing people from making their own healthcare arrangements,” Dr Miller said.

WA Premier Mark McGowan said Tharnicaa may be in the Perth Children’s Hospital for a considerable period.

“She’ll receive all the medical attention that she needs to get better and I don’t know how long that will take, it may take days it may take weeks,” he said.

Mr McGowan urged the federal government to resolve the issues regarding the family as soon as possible.

Asked if he believed they were being shown enough compassion, Mr McGowan responded: “Oh look, I’ll just leave that to the Commonwealth.”