Pazarkule, Turkey: Turkey has accused Greece of opening fire at migrants trying to cross the border, killing at least one, as Athens dismissed the charge as "fake news" and worries grew that Europe was about to face a new version of a migration crisis it thought it had solved.

The rush of news left the European Union scrambling for solutions on Wednesday.

The governor of Turkey's border city of Edirne, near the zone of clashes between the migrants and Greek security forces, said that one migrant was killed and five were wounded by gunfire. 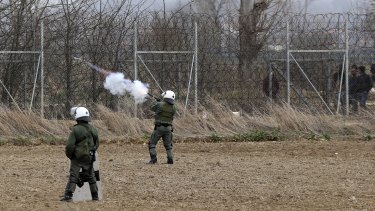 Greek riot police fire tear gas at migrants who try to enter Greece from Turkey at the Greek-Turkish border in Kastanies on Wednesday.Credit:AP

All six victims are reportedly male, but their identities were not immediately known, the governor said in a statement.

The dead person was hit in the chest. The Greek border police used rubber and live bullets along with gas, stun and smoke grenades, it added. 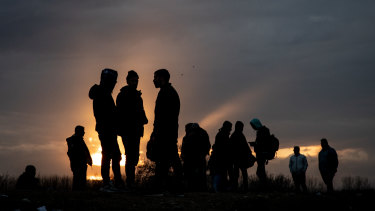 Refugees and migrants are seen at a makeshift camp next to the Edirne Old Bridge in Turkey. Thousands of refugees and migrants have flocked to the border after Turkey made good on a promise to stop blocking their passage to Europe.Credit:Getty Images

Thousands of migrants are stranded on Turkey's land border with Greece ever since Turkey on Friday said it would no longer stop them from trying to reach Europe.

But the move was met by a harsh response from Greece, which does not want a repeat of the last migration crisis that peaked in 2015-16.

Greek security forces have been firing tear gas at the migrants trying to cross the land border between Kastanies and Pazarkule nearly every day since Turkey flung the border gates open.

At Kastanies, on the Greek side of the border, the military allowed reporters one hour of access to the restricted zone on Wednesday.

A DPA reporter saw police in riot gear launching tear gas at migrants as they moved toward the border fence and barricades. The migrants threw some still-smoking missiles back, along with stones.

Meanwhile, Turkish President Recep Tayyip Erdogan promised not to move to reestablish border controls for migrants until his conditions are met.

"This refugee influx will continue until a new constitution, based on Syria's political unity and territorial integrity, is drafted and free elections are held … and a new government is formed," he said on Wednesday.

"If they want to solve the issue, European countries should support the political and humanitarian solution Turkey is trying to achieve in Syria," Erdogan added.

He is due to meet with Russian President Vladimir Putin in Moscow on Thursday to discuss the escalation of tensions between the two countries in Syria where President Bashar al-Assad has cornered the last of his opposition – fighters and civilians – in Idlib province, near the border with Turkey.

Russia, which supports Assad and has been a major player in air strikes on rebel targets, is said to be reinforcing its troops located in Syria, by sea and air ahead of the talks, which Erdogan hopes the talks will yield a ceasefire in Idlib. 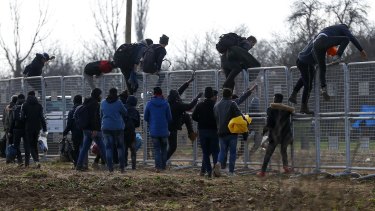 Migrants climb a fence installed by Turkish authorities near the Turkish-Greek border in Pazarkule on Wednesday.Credit:AP

"This migratory pressure is organised," Le Drian told the Senate in Paris. "It is organised by President Erdogan's regime as a form of blackmail against the European Union."

EU Foreign Policy Chief Josep Borrell, after meeting Erdogan and other officials over two days, said that the bloc could work with Turkey to address the conflict in Syria, but warned that Ankara's decision to open its borders to Europe undermines trust.

On the agenda was further EU assistance to help Turkey address "the challenges stemming from the situation in Syria," according to an EU statement. The EU, in turn, expects Ankara to "deliver on its obligations" under the 2016 EU-Turkey migration deal.

According to Greek sources, some 12,500 migrants were massed across the border, with the biggest flashpoint in the area of the Kastanies-Pazarkule crossing.

This has sent the EU scrambling for measures to prevent a new surge of migrants, four years after a collapsing deal with Turkey hugely curbed the number of people making it into the bloc.

In Brussels, EU interior ministers held emergency talks and agreed that the bloc should take "all necessary measures" to protect its border "in accordance with EU and international law," according to a joint statement.

A small demonstration of some 350 people assembled outside, holding signs reading "Refugees Welcome" and "Protect humans, not borders".

Many in the EU worry about a repeat of Europe's 2015-16 migration influx, which triggered a populist backlash and gave rise to anti-EU forces.

EU top officials and member states have stood resolutely by Greece in the past few days, despite accusations of heavy-handed tactics from rights groups and NGOs.

Luxembourg and Finland have offered to take in 100 and 175 vulnerable people, mostly minors, from Mediterranean countries.

Many in the EU worry about a repeat of Europe's 2015-16 migration influx, which triggered a populist backlash and gave rise to anti-EU forces.

The flaring crisis at the Turkish-Greek border also exposes a broader rift between member states on how to deal with migration.

Efforts to overhaul the bloc's outdated asylum rules have led nowhere, with EU capitals fiercely divided on whom to take in and how to distribute them.

European Commission Vice-President Margaritis Schinas, who oversees migration affairs, said he hoped the new pact could be unveiled within a few weeks.

EU border agency Frontex is preparing to deploy further equipment to the Greek border, while Athens can expect up to €700 million ($781 million) in additional EU funding.

Greece was also taking steps on its other flank, in the Aegean, and is set to accelerate the deportation of migrants still arriving on the islands.

On Sunday Athens suspended asylum applications for a month and plans to expel all those arriving in the meantime with an expedited procedure.

Who is JK Rowling’s ex-husband Jorge Arantes? – The Sun